'Golden Coach' running on all cylinders at Hill theater

Sarah Labov (left) and Carol Enoch are seen in a scene from “The Golden Coach,” now playing at The Stagecrafters, 8130 Germantown Ave., until April 26.(Photo by Sara Stewart)[/caption] by Hugh …

'Golden Coach' running on all cylinders at Hill theater 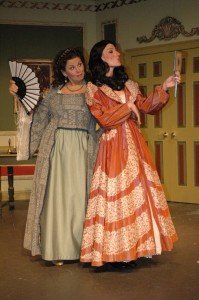 Sarah Labov (left) and Carol Enoch are seen in a scene from “The Golden Coach,” now playing at The Stagecrafters, 8130 Germantown Ave., until April 26.
(Photo by Sara Stewart)[/caption]

“The Golden Coach” now running at Stagecrafters is a breath of fresh air. Though set in the 18th century at the royal court of Lima, Peru, this delightful comedy also has universal appeal.

The two central characters are real historical figures. Micaela Villegas was the great Peruvian actress of her day. Often using the stage name “La Perricholi” (“The half-breed bitch”), this mestiza shocked the Castilian upper class by having a very public affair with Manuel de Amat y Junient, Viceroy of Peru.

The legendary romance became the basis for a one-act play by French writer Prosper Merimee (1829). The story also inspired an Offenbach opera, a Thornton Wilder novel (“The Bridge of San Luis Rey”) and a Jean Renoir movie with Anna Magnani (1953). Director Yaga Brady's two-act play is based on her translation and rewrite of the Merimee original.

But “The Golden Coach” is also a timeless comedy of political intrigue. Private secretary Martinez (Joe Herman) plies the viceroy with stories about Micaela in hopes of keeping his court position. Old nurse Francisca (Mary Zell) sees her master's peccadilloes but finds it expedient to hold her tongue.

Rosita (Sarah Labov) comically backs up her cousin Micaela's plots at every turn. The high clergymen are secure in their class position and have less need to scheme. But Monsignor (Steve Sussman) and Archbishop of Lima (Bob Forman) make up for that with their ludicrous complacency that makes them easy marks.

Carol Enoch is superb as wily Micaela. She wonderfully depicts the crafty actress in contrasting moods of agitation and languor, and often graces the stage with flowing costumed movement. The role is difficult, but Enoch's performance is so unerring you never doubt Micaela's reality.

Actor Carl Heyde matches up well. Though mostly a foil for Micaela (everyone is), Manuel de Amat is a gamester in his own right. As the Viceroy is bombarded with troubling events in his scheming court, Heyde is deft at revealing character through body language.

The legend of Micaela and the Viceroy has special meaning in Peru. It touches on Spanish relations with the Inca natives and on special features of the Latin American class system. At the same time the story feels familiar because in all seats of political power high-handed maneuvering is there for all to see.

But in contrast to a drama like “House of Cards,” there is no scornful moralizing in “The Golden Coach,” no insinuation that common people are more virtuous than those in power. In this refreshing picaresque comedy, it is the commoner Micaela who wins out, largely because she is more adept than her “betters” in making use of vice.