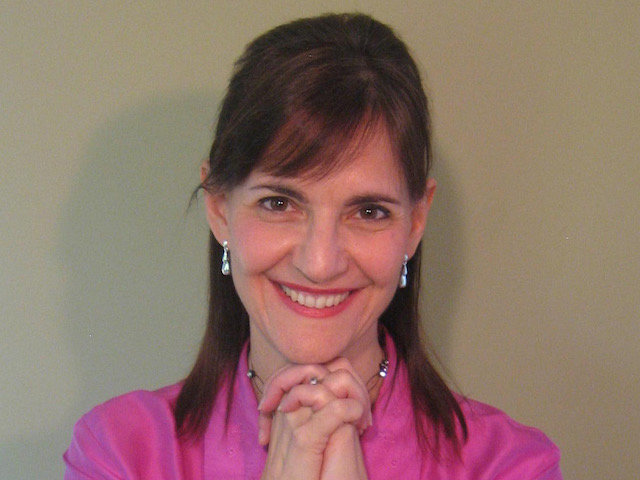 Susan Blair, of Mt. Airy, one of the stars of “Calendar Girls.”[/caption]

“Calendar Girls,” written by Tom Firth, continues at Old Academy Players, 3540 Indian Queen Lane in East Falls, on weekends through Jan. 27. Directed by Loretta Lucy Miller, the play is based on a true story about a group of middle-aged women who produce a nude calendar to raise money for the Leukemia Research Fund under the auspices of the Women’s Institute after the cancer death of the husband of one of their members.

“After Annie's husband John dies, her best friend Chris becomes the driving force behind the idea of stripping and producing this calendar,” said Susan Blair, who takes the role of Chris. “The money will be used to buy a new couch for relatives waiting in the cancer wing. While visiting Annie and John in the hospital, Chris notices a ‘girlie’ calendar in a local gift shop, and after John’s death decides that printing a nude calendar of their own, featuring the women of the Women’s Institute engaged in their traditional activities, such as baking and knitting, would be perfect.”

Blair used to live in Chestnut Hill with her husband Mort Paterson, who also acts in community theater and whom she met while the two were appearing in a Gershwin musical titled “Of Thee I Sing.” After deciding to downsize, the couple moved to Mt. Airy where they happily reside today. Blair said, “This is the perfect place to live. All the neighbors are extremely friendly. We even hold get-togethers like block parties.”

Blair has appeared in five plays last year alone, something she never saw happening. Raised in Pittsburgh, she moved to this area to attend Rosemont College, majoring in liberal arts while doing some theater on the side. “I had always been interested in theater,” she said, “but wasn’t sure I could do it for a living But after I graduated, I began to take it seriously and took acting classes while working as an admissions clerk at Children’s Hospital. Later, I attended a paralegal school, and that’s when I dove into community theater.”

Today, Blair is a paralegal in a law firm, which she has done for three decades. And she’s done community theater for almost as long. Included in that long list of credits is one of her favorite roles in “The Beauty Queen of Leenane,” mainly “because it runs the gamut of emotions.” It was produced in 2014 by the Langhorne Players. But after doing this show, she’s adding “Calendar Girls” to that favorite list, “mainly because of the camaraderie of all the ladies involved in the cast. I think the director cast this show very well.

“This is a great show for older women, something you don’t find very often,” said Blair, 63. “Of course, knowing we had to get naked (although we are strategically covered) meant we started to think about dieting and getting into better shape. The director assured us nothing would show, and we all felt very comfortable with that, so it wasn’t scary for any of us. And although it’s a fun role to do, there are some emotional moments between Chris and Annie, so I’m glad it’s not all fluff. The show does have its serious moments.”

Later, after retirement, Blair hopes to make acting a full-time career. “I do hope to keep acting and maybe be in a professional production some day. Theater is my addiction, and I am most happy when I’m in or working on a show.”