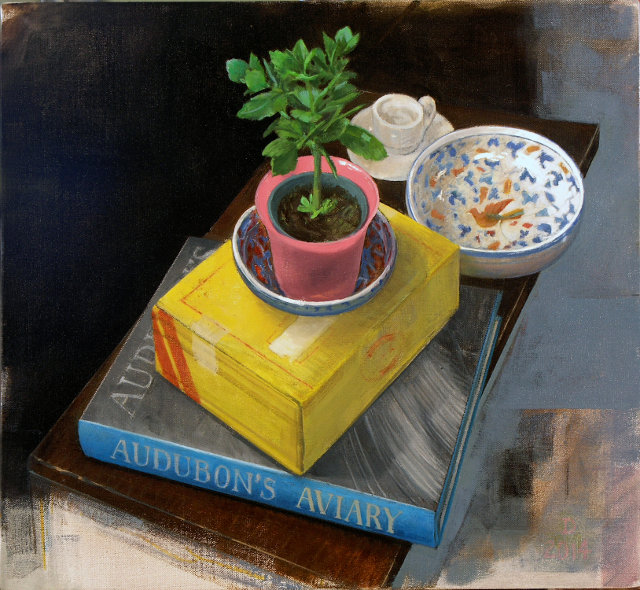 This recent painting of “innocuous” household objects reflects Dallmann’s turn away from painting the human figure, which he had done for years.[/caption]

Michael W. Schantz, Ph.D, Director and CEO of Woodmere Art Museum from 1981 to the end of 2009, wrote in his book, "Artistic Legacy: Selections from the Woodmere Art Museum Permanent Collection,” that “Dan Dallmann has been one of Philadelphia's most gifted figurative artists for three decades. He has excelled in painting, drawing and printmaking and has shared his great breadth of artistic knowledge with numerous aspiring artists as a faculty member of Temple University's Tyler School of Art … The inspiration Dallmann derived from Italian art and society has long burned within him … ”

Dallmann, 74, who has devoted more than a year to renovating a small house in Germantown, had a remarkable 43-year career as a beloved instructor at Tyler from 1969 to 2012. An exhibit of his work opened Nov. 2 and will run until Nov. 30 at Gravers Lane Gallery, 8405 Germantown Ave.

Dallmann was born in St. Paul, Minnesota, and basically stayed put until he finished graduate school at the University of Iowa, where he studied printmaking with Mauricio Lasansky, earning a Master of Fine Arts degree. (Lasansky was a famous Argentine-born master printmaker who was best known for a series of drawings depicting the horrors of Nazism. He was given a major obituary in the New York Times when he died in 2012 at age 97.)

Dallmann moved to Philadelphia in 1969, when he began teaching printmaking at Tyler. “My father was a sculptor, and my mother trained as a painter,” said Dallmann last week, “but in the early years I had no interest in calling myself an artist. Yet art was all around me, part-time work in my father's studio, on the walls and in the bookshelves.

“My parents loved books, and that rubbed off on me. We had all kinds of books: encyclopedias and dictionaries, books on nature, music, literary classics and art. I loved the big library dictionary, with the fine line drawings of everything from sailboats to insects. I knew N.C. Wyeth's illustrations for ‘Treasure Island’ and Rodin's sculpture, Giotto's frescoes and much, much more, all from that treasure trove in my parents’ library collection.”

Dallmann’s long tenure at Tyler offered extraordinary experiences, not the least of which was the opportunity to teach in Rome. His first tenure in Italy was from 1974 to 76. It was during those years that he began a serious effort to paint, although in undergraduate school he had focused on drawing, printmaking and ceramics.

“I've taken only one painting course in my life,” he said. “I can almost claim that I'm self-taught as a painter. I sometimes quip that I actually studied painting with Caravaggio. During the first two years in Rome I lived near the church of Santa Maria del Popolo, where there are two of the most important paintings by Caravaggio.

“It was a near-daily ritual for me to stop by and study those paintings for a moment or a half-hour or even more. Apart from the financial security and living for a number of years in Rome, my work at Tyler provided me with the good fortune to know and learn from many of my colleagues and all of my students.” 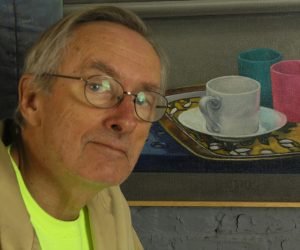 Daniel Dallmann, 74, who taught at Tyler School of Art for 43 years, has an exhibit of his work currently on display until Nov. 30 at Gravers Lane Gallery, 8405 Germantown Ave.

For many years Dallmann’s work was devoted to the human figure because it “is a powerful subject, demands attention, asks questions and suggests answers.” However, in recent years he has gradually eschewed the presence of the human figure, working instead with “innocuous subject matter that left me free to revel in the formal aspects of that balancing act, unencumbered by the social implications of the figure.”

The current show at Gravers Lane Gallery represents that departure for Dallmann in that the subjects painted have little or no narrative importance. “A teapot, a book or a studio interior have very little subject interest,” he explained, “at least not compared to a naked sleeping couple or a woman drifting in revery above a display of red geraniums!

“Yet this choice of more modest subjects is … no less dramatic; it's just that the drama arrives more from the visual experience and less from the subject represented, much as the drama of music affects your appreciation through an audio experience, even without words.”

Dallmann’s work is in more than three dozen collections, both public and private, in many states. He has had 23 solo exhibits of his work in a wide variety of galleries in many states as well as the United Kingdom and Rome, Italy.

An opening reception at Gravers Lane Gallery will take place this Friday, Nov. 4, 5-8 p.m. More information at 215-247-1603 or www.danieldallmann.com.