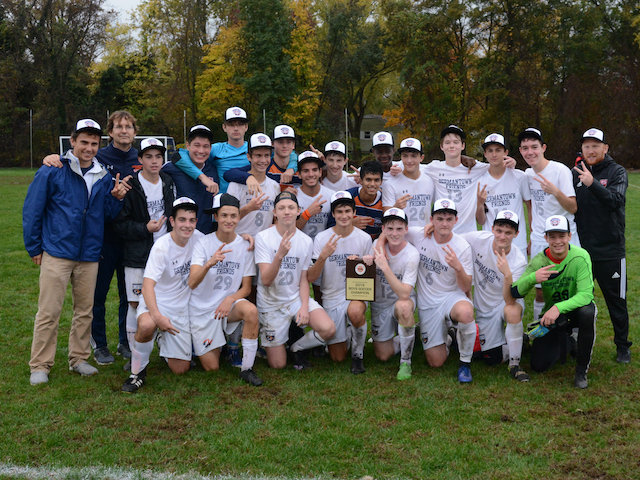 On Thursday, Oct. 24, the Tigers hosted the Academy of the New Church Lions in a first-round playoff game, with the two squads having played to a 1-1 tie in Bryn Athyn during the regular season. GFS dominated the visitors by a 5-0 score, paced by junior Max Orenstein, who tallied three goals and an assist. Senior co-captain James Hobbs Pifer, the team’s leading scorer, and freshman Isaac Okewole each netted a goal to complete the scoring.

On Saturday, Oct. 26, the team traveled to Westtown to face the top-seeded Moose in a semifinal contest. During the regular season, Westtown handed the Tigers their worst defeat of the year by a 4-1 margin. This time, however, the tables were turned and GFS rode a 2-0 halftime lead to a 4-1 reversal over the hosts. Pifer scored twice, while senior co-captain Nolan Grady and junior Lucas Johnstone-Peck each scored once.

“Westtown was the most talented team in the Friends League this year, and they certainly beat us up good the first time around,” said GFS coach Sam McIlvain. “But we knew that if we executed our game plan, we would be in a good position to take this game from them, and we certainly did that and then some. The boys simply refused to lose. The work rate was tremendous, the discipline superb and we took advantage of our opportunities. It was great to see their efforts rewarded.”

With the win, the team prepared to take on the Moorestown Friends Foxes, who had beaten them in the regular season by a 2-1 score. It was a match, however, that Pifer missed due to injury. This time, he made his presence felt as he scored a goal in each half to lead GFS to the championship. Grady and junior Lucien Dalseth provided the assists. Senior Eli Kushner made seven saves to keep a clean sheet, his seventh of the season.

“We knew it would be a tough final,” McIlvain said. “MFS had a team with an outstanding work rate and above average athletes and soccer players. They also had a good pace up front, which was a challenge for us. But we did an excellent job keeping the ball until finding the opportunities to attack their back three, and we closed quickly whenever we lost it, limiting their countering opportunities. And after we got the early goal on James’s great header, we were in the driver’s seat.”

The Tigers couldn’t afford to celebrate for too long, though, as they had a meeting with local rival Penn Charter in a first round PAISAA state championship game scheduled for Friday, Nov. 1. This time, Grady, playing his final home game, made the highlight reel with a hat trick, scoring all the goals in a 3-1 win over the Quakers.

The GFS season ended on Tuesday, Nov. 5, however, with a 4-2 quarterfinal loss at the eventual PAISAA runner-up, Haverford School.

GFS ended its season with a record of 11-5-3 and outscored their opponents by a 50-22 margin. This was the sixth league title for the Tigers and the second time that they had won consecutive FSL titles, the previous time being 1996 and 1997.

Grady was honored by the league coaches, who named him to the all-Southeast Pennsylvania and all-state teams. This was the fourth year in a row that a Tiger booter was awarded all-state status. Previous GFS all-state honorees include Paul Coviello in 1986, Mbizo Mzamane in 2005, current GFS girls’ soccer coach Manolo Sanchez in 2008 and 2009, Ray Hill-Cristol in 2016, Isaac Myran in 2017 and Jacob Sternberg-Sher in 2018.

McIlvain summarized the contributions of the two captains this way: “Nolan and James had such tremendous seasons. Between the two of them, they scored 25 of our 50 goals [12 and 13, respectively]. They were our go-to-guys and they always delivered in crunch time, but they also did a great job in training and off the pitch, too, helping set the right tone and helping foster a culture of togetherness and success. They are great kids and effective leaders.”