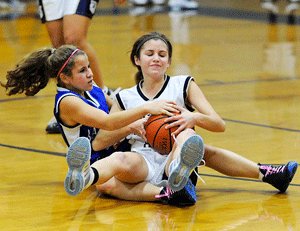 The inside/outside offense of Barrack Hebrew Academy forwards Jackie Khurtosky and Sophia Shoulson and point guard Tamara Moskowitz proved too much for host Germantown Friends last Tuesday afternoon, when a 46-30 loss to the visiting Cougars brought GFS back to even, with a record of 2-2.

Moskowitz jumpstarted Barrack Hebrew’s offense with some early three-point buckets and finished with a game-high 13 points, while Khurtosky and Shoulson produced in the paint, netting eight points apiece. The Cougars also got six points from Sivan Ben-Maimon and four from Sarah Gordon as they raised their record to 5-1.

The Tigers had opened the season with a loss at Episcopal Academy, and then they won the championship at their own Germantown Community Tournament with victories over Germantown High School and Bodine High School for International Affairs.

Last Tuesday, jumpers by Myran and Loder staked GFS to a 4-2 lead in the first two minutes, then a pair of three-pointers by Moskowitz helped power a 10-0 run by Barrack Hebrew, and the Cougars led the rest of the way.

Second-year GFS coach James Jordan pointed out, “Our team is so young that sometimes when the other team makes a little run we don’t respond. When things are going well for us, the freshmen and sophomores have more confidence.”

Loder is the only member of the team who plays a lot of club basketball outside of the school season, but Jordan cautioned, “We can’t just look for Julya every time; the other girls need to be more aggressive. When we’re on offense, they need to catch the ball and try to get a look at the basket themselves.”

Myran followed this advice, but some of the other Tigers were a little more tentative. After Samuel and Loder each went two-for-four at the foul line early in the second quarter, Myran hit a 15-footer to make it 18-14 two minutes before the interlude. That’s as close as the hosts could come, and the Cougars collected the final field goal of the first half.

When play resumed Loder put back the rebound of her own shot to make it a four-point game once more, then Barrack embarked on a 14-6 run that extended into the fourth quarter and gave the visitors a 34-22 advantage. It became even tougher for the Tigers to rally when a charging call slapped a fifth personal foul on Myran, who retired to the sideline with 5:33 left to play. Both teams aired out their benches during the last few minutes of the contest.

Jordan would like to see his charges cut down on turnovers in future outings.

“One thing we need to focus on is being strong with the ball, and not allowing the other team to take it away from us so easily,” he said. “Once we emphasized that, I think we did a better job there later in the game.”

UPDATE: GFS rebounded from Tuesday’s loss with a 36-30 victory over Bishop McDevitt High School on Thursday afternoon. Loder erupted on offense for a game-high 21 points and Myran scored seven, with Samuel adding four points for the Tigers and Mercuris and Walden tacking on two points apiece.