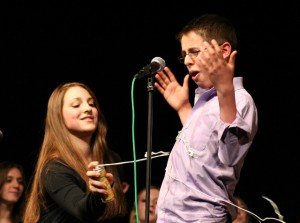 [/caption] by Michaela Reitano, GFS Class of 2014 Last weekend, Germantown Friends School hosted “A Cappella Fest,” the much-anticipated annual music festival showcasing close-harmony singing groups from local schools. A total of nine groups performed over two nights, each taking the stage to reveal the songs they had been working on since the beginning of the school year to a packed auditorium of family and friends. At the Friday Preview concert, the roster included the GFS Middle School A Cappella, The Baldwin B-Flats, The University of Pennsylvania’s Penn Pipers and GFS A Cappella, the only group to perform both nights. Highlights included the Baldwin B-Flats, who exhibited an impressive unity and stage presence on numbers like “Fidelity” by Regina Spektor and “Black Horse and the Cherry Tree” by KT Tunstall, and the Penn Pipers, a male subset of the Penn Glee Club from the University of Pennsylvania, who performed many Barber Shop- and Doo-wop-style songs that showcased their amazing sound and command of the music. The show closed with GFS A Cappella, giving a preview of their Saturday night lineup. Saturday’s Festival — the main event — did not disappoint. The first group to perform was the Quakers Dozen from Penn Charter, which sang songs by a diverse group of artists, including “Esto Les Digo” by Kinley Lange and “It Don’t Have to Change” by John Legend. The Dozen did a complete 180 with their last number, “We Found Love” by Rihanna/Calvin Harris, which was a departure in tone from the beginning of their set. The song was cleverly staged, and the audience really enjoyed the high-tempo performance. The Chamber Singers of SCH Academy (a combination of the Laurelai and the Hilltones) followed, performing together as well as separately. There was a sweet contrast between the low voices of the Hilltones and the higher voices of the Laurelai. Each group impressed the audience with their passionate sound. GFS A Cappella came next, performing a variety of songs ranging from “I’ll Be Waiting” by Adele to “Short Skirt/Long Jacket” by CAKE to “Jai Ho” by A.R. Rahman. The group, which was just nominated for four Contemporary A Cappella Recording Awards (including Best High School Album for The Blue and White Album), had a high-powered, dynamic sound and great stage presence. The highlight of their set was a choreographed medley that featured “A History of Rejection” and “If I Had a Million Dollars” by the Barenaked Ladies, which morphed into “Can’t Buy Me Love” by the Beatles. After GFS A Cappella, Penn’s Off the Beat took the stage and astonished the audience with their jaw-dropping dynamics and sheer ability. Each member impressed with his or her amazing voice. The last act of the night was JD Walter, a phenomenal jazz singer who used special equipment to record himself live on stage and then used those recordings, which sounded like a live band playing behind him, to sing A Cappella. His performance left the crowd cheering and marked the end to yet another unbelievable A Cappella Fest.