Get your jingle on with the Christmas Holiday House Tour

Get your jingle on with the Christmas Holiday House Tour 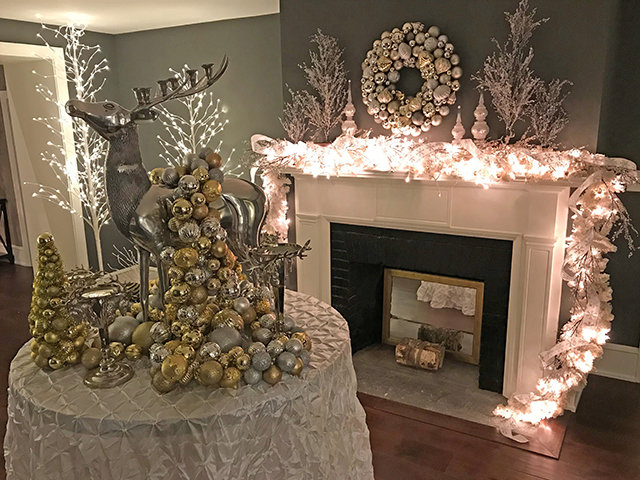 by Laura Lucas and John Phillips

On Dec.9, Chestnut Hill’s Christmas Holiday House Tour will return for its 24th year and marks one of Philadelphia’s longest running holiday house tours. The annual event organized by the Chestnut Hill Community Association is sure to delight those who love checking out Chestnut Hill’s diverse housing styles while also fulfilling everyone’s secret desire to check out how others decorate their homes for the holidays. This year’s tour of five homes includes two very large homes and plenty of surprises along the way.

A sneak peek of the homes

The oldest home on the tour occupies one of the most historically significant intersections in Northwest Philadelphia and fronts “Forbidden Drive.” It has many additions and modifications to keep up with the needs of homeowners through the years. It is currently on the market for $2.6 million, which may make the ultimate Christmas gift. The original dwelling on this site dates back to 1722. Once home to millers, blacksmiths and farmers, this area has evolved into a wealthy residential neighborhood with many spacious luxury homes. Make sure you check out the carriage house and a special surprise from our Main Sponsor, Audi of Willow Grove.

The second house on the tour, a younger addition to Chestnut Hill housing stock yet still of impressive age and size from 1929, is swoon-worthy. Once repurposed as a conference center, it too includes several extensive alterations, including the relocation and installation of the 16th-century fireplace and wood paneling from a previous owner’s estate. The wood paneling is reported to have been obtained from the hunting lodge of King James II.

A third house on the tour showcases the diverse collection of magnificent Victorian architecture we have in Chestnut Hill. The home was designated a National Historical Site, and remains the centerpiece of Chestnut Hill’s Historic District. Documented in 1855, this home is one of the first large houses built on its street. Its signature three-story tower once featured an open cupola but is now finished with an enclosed roof. Now in the hands of loving owners, it is being restored, and stands as an iconic example of Chestnut Hill’s irreplaceable architectural heritage.

The fourth house on the tour is in the Modern style, which traces its roots to the massive social, political and artistic reaction that followed World War I, with architecture that stresses rationality and function. It shows the flexibility of Modern architecture to maximize the use of a challenging lot. The current owner purchased the house in 2015. A designer by profession, she transformed the interior to meet the exacting standards of a most demanding client: herself. Soaring two-story spaces and an open second floor loft create a sense of space and light within the compact footprint.

The final house on the tour has been described as a jewel box. While Chestnut Hill is often perceived as a wealthy residential neighborhood, it is a very diverse community. Before the railroads, before the mansions, Chestnut Hill was just a simple crossroad town situated at the intersection of the Germantown and Bethlehem Pikes. As such it was home to many small businesses serving the local economy. Flour mills lined the Wissahickon Creek. Blacksmiths, dry goods stores, inns and taverns served farmers bringing produce to Philadelphia. As Chestnut Hill evolved, it attracted the stonemasons, roofers and woodworkers who were needed to build the large houses that define it.

Although little is known of the history of this house, it is representative of the small owner-occupied business that thrived along Bethlehem Pike, built around 1890.

More about the tour

Attendees are invited to return to the Woodmere Art Museum when they finish the tour, between 3:30 and 4:30 p.m., to enjoy a holiday reception with light refreshments and to explore the galleries. The current exhibit, “A Grand Vision: Violet Oakley and the American Renaissance,” is not to be missed!

To begin the tour, attendees must stop by one of our two registration locations: Woodmere Art Museum, 9201 Germantown Ave., or Hill Company, 8040 Germantown Ave., to pick up their tour booklet, map and wristband. The tour is self-guided, and attendees have the option of driving to the homes or riding one of our special-event trolleys. Free parking is available at Woodmere; at Hill Company on-street parking is available.