Wearing a mask, gloves and with hand sanitizer in tow, Flourtown resident Barbara Sherf was determined to cast her vote on Election Day and not give her cold to either Republicans or Democrats. … 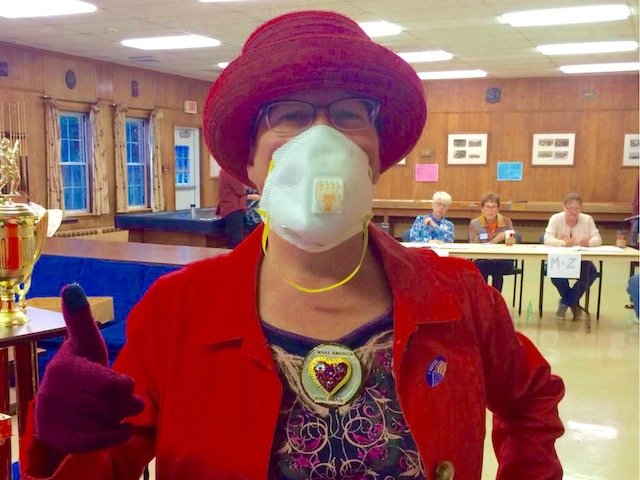 Wearing a mask, gloves and with hand sanitizer in tow, Flourtown resident Barbara Sherf was determined to cast her vote on Election Day and not give her cold to either Republicans or Democrats. (Photo by Josh Burns)

For those of you who are regular readers of this publication, you may recall two articles I wrote about the “Free Hugs” movement. For those not familiar, the “Free Hugs” campaign is a social movement involving individuals who offer hugs to strangers in public places. The hugs are meant to be random acts of kindness — selfless acts performed just to make others feel better.

Following the 2016 elections, I felt a need to join this group and drew a “Free Hugs” sign (now-tattered) with attached string to wear around my neck, thus keeping my hands free to do the hugging. On the bottom of the sign is the slogan “Make America Kind Again.”

On the Sunday before Election Day, the spirit moved me to visit our Rose Lane neighbor, Ginny Ashenfelter, longtime owner of now-closed Chestnut Hill gift shop known as The Happy Butterfly. Ginny is now living in the Harston Hall Nursing Home in Flourtown.

Despite not wearing my “Free Hugs” sign, I was stopped numerous times on my way to her room on the second floor. “Here she comes, the ‘Free Hugs lady,’” residents chimed, while lining up their wheelchairs for an embrace.

Prior to visiting Ginny, I had helped a friend pack some boxes for a move the following day. After about 40 minutes into the process, I felt my throat closing and realized there were mold spores in the basement we were working in. As one who is allergic to mold and dust, I did a quick exit as a ‘tickle’ started in my throat.

Despite the “tickle” not really tickling, we had longtime plans to meet up with Mt. Airy friends at Trattoria Moma within walking distance of their home. Despite great food, service and conversation, the “tickle” was not tickling but now really hurting – like hell.

By 4 a.m. Sunday morning, I woke to what can only be described as searing throat pain. “Oh no! No more free hugging for me until next spring,” I thought.

On Sunday I reached out to our activist neighbor, Social Justice Indivisible (Springfield-Chestnut Hill) founder Ellen Stevenson to see if she could find a replacement for me at the polls. I would crawl to vote if I had to, but I knew I could not stand out on a porch in the rain welcoming voters. As it was, I could barely remain vertical.

Monday was a bit of a blur as I tossed and turned with fever overnight. “This will pass,” I told myself. “It’s just a cold, not cancer, like two friends who are struggling with ‘The Big C’ right now.”

On Election Day I was up early but decided to wait until the rain subsided to do two things. The first was to get to the polls, and the second was to score more orange juice. The weather only got worse.

At about 9 a.m., our fabulous lawn/handyman angel texted to say he wanted to show me his new (to him) used white pickup truck. Walking out the driveway with a white painters’ mask on, gloves on my hands and a big bottle of hand sanitizer in tow, I opened the passenger side door. “Can you take me for a test drive?” I asked.

“Sure thing, where to?” asked Josh Burns of Lafayette Hill, whose late Uncle Timmy lived on Rose Lane and was part of the architectural team who drew up plans for our former artists studio-turned home of 30 years.

“Flourtown Fire Company. I need to vote,” I directed. “Then Wawa.”

He dropped me at the front porch (where a host of volunteers, including Stevenson, were handing out material), and I went in to do the deed. Yes, people stared and possibly wondered if I had cancer. I explaining that I was still in the infectious stage with the cold, and they expressed their gratitude while steering clear.

Upon entering the voting booth, and with the mask and gloves still on, I pressed the appropriate button and registered my vote. Turning on my heel, I walked back to the registration table and placed the large bottle of hand sanitizer in front of the workers. “Here, please use this,” I said.

Upon exiting the fire station, Josh picked me up at the door and drove me to Wawa for the juice before delivering me safely to my front door. God had sent me a little angel. Had it not been raining, Josh would have been doing many of the lawns on Rose Lane.

Author, storyteller, publicist and speech coach Barbara Sherf can be reached via h her website CommunicationsPro.com or e-mail at CaptureLifeStories@gmail.com. Germs