Under the basket, GA's Kendall Bennett (left center) and Maddie Burns both get inside position for a rebound. (Photo by Tom Utescher) by Tom Utescher On the medical front, the Germantown Academy … 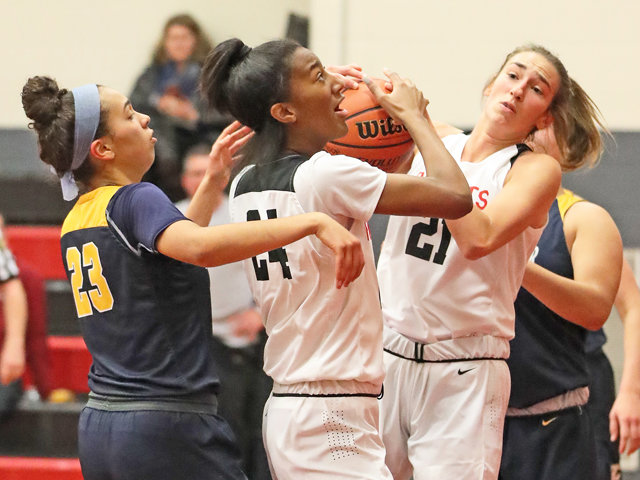 Under the basket, GA's Kendall Bennett (left center) and Maddie Burns both get inside position for a rebound. (Photo by Tom Utescher)

On the medical front, the Germantown Academy girls' basketball team got hit in the mouth, down at the ankle, in the shoulder, and in the head.

Even though host GA was not at full strength and Penn Charter came in riding an 11-game win streak, the PC Quakers appeared nervous and somewhat intimidated by the Pats during the first half, and they trailed 36-17 at the intermission.

This had happened to Charter in the past, but after some soul-searching in the halftime huddle, the Quakers came back out as a different team for the start of the third quarter. Pressing and creating a number of turnovers by GA, PC got back within 10 points with three minutes left in the period.

GA dug in at this point, and didn't let the gap slip down into single digits. It was 49-35 with just over five minutes remaining in the game, then the Patriots got into the foul bonus and scored 10 of their last 12 points from the foul line to win 61-47.

Germantown Academy's depth up and down the line-up has proved more important than ever during the recent spate of medical problems. Longest in duration has been tendinitis suffered by Stauffer; the high-leaping senior forward has only played sporadically since mid-December. Even with Coach Retif out of action due to concussion protocol (she was struck by a stray ball while teaching a P.E. class), longtime assistant Andre Strothers was fully capable of piloting the Patriots.

In Tuesday's contest, GA's Haynes started in on her game-high performance by hitting three consecutive lay-ups for the hosts. Senior Carmen Williams opened the scoring for Penn Charter, but GA added a bucket by Booth and senior forward Maddie Burns converted on a rebound and then scored off a steal. Fouled on the latter play, Burns made her free throw to give the Patriots a 13-2 lead midway through the first quarter.

Quakers senior Kait Carter and freshman Aleah Snead produced points later on, but the visitors still trailed 18-8 at the end of the period. As round two began, Haynes scored in transition and Booth connected on a short jumper and on a put-back, spreading the score to 24-8.

Carter, Snead, and freshman Kelsey Bess helped Charter cut its deficit to 11 points (28-17) with three minutes left in the second quarter, but drives by Haynes and junior Jessica Moore started the Patriots out on an 8-0 run to finish the half. In the final minute, PC's defense failed to rotate as Germantown swung the ball around the perimeter, and Vizza was wide open for a three-pointer from the right wing.

She and Booth finished the half with seven points apiece, while Haynes led all scorers with 13 points as GA went into the locker room with a 36-17 advantage. Carter had scored eight points to pace Penn Charter.

Watching from the GA bench, the Patriots' Stauffer was pleased to see her team play well despite some significant injuries over the past few weeks.

"I think people are stepping up," she said, "especially Jess Moore and Maddie Burns. They're getting rebounds and being physical, and other people are doing a good job coming off the bench."

Of course, she'd still rather be playing.

"In that way it's hard," she admitted, "but I love watching them play and supporting them. It's easy to support them because we're like a family."

Neither squad scored for more than a minute as the third quarter began, then a driving lay-up and a foul shot by Moore gave Germantown a 22-point lead at 39-17. Charter began to fight back with a "three" sent up by Bess from the top of the key, and this proved to be the start of a 14-2 run for the Quakers. 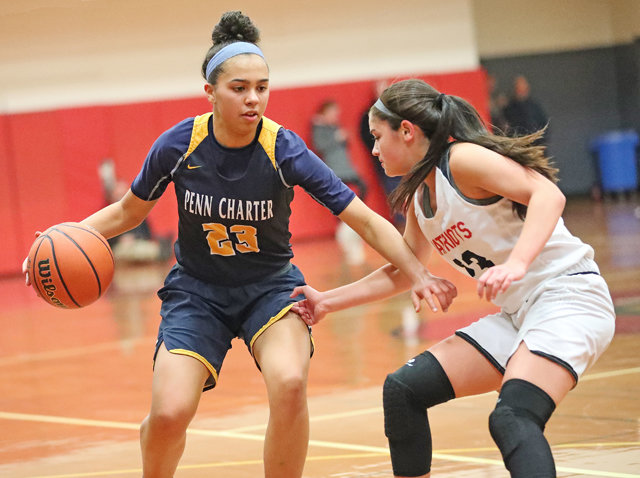 For some minutes, an aggressive Penn Charter press wreaked havoc with GA's transition game, creating turnovers that resulted in a lot of possession time for the visitors. The Patriots seemed startled by the Quakers' new intensity. Williams, Snead and Carter joined in on the scoring, and with three minutes left in the third period, a steal by Charter led to a lay-up by Williams that narrowed the gap between the teams to 10 points, 41-31.

After Booth scored of an offensive rebound for GA's first points in three-and-a-half minutes, the score remained 43-31 until almost the end of the quarter. This was not really good news for the Quakers, who had clearly had the momentum earlier on.

PC called time-out with 17 seconds in the period, with GA still up by 12 and with the scoreboard also showing five team fouls for each side. The Patriots maneuvered through the PC press to bring the ball up the floor, and Haynes passed to Moore for a field goal that set the score at 45-31 at the three-quarter mark.

The hosts were certainly in a better spot than they'd been a few minutes earlier, when their position seemed shaky.

"We just needed to slow down," Stauffer commented. "We were rushing too much trying to break their press."

In the opening stage of the fourth quarter, the tally seesawed up to 49-35. Over the next few minutes Penn Charter got field goals from Williams and Snead while GA's Haynes made three of four free throws. A Vizza jumper made it 54-49 as the clock slipped down near to three minutes remaining.

Carter eventually hit a "three" for the Quakers, but it took almost 40 seconds; the Quakers needed to score more quickly at this juncture. The clock stopped entirely for a pair of PC one-and-one's, but the Quakers only nettted one point out of a possible four.

Over the last 95 seconds of the game, Penn Charter's Snead scored a lay-up and put in a pair of foul shots, but GA got four points on free throws from Vizza and three from Haynes.

Surviving a fierce challenge from the Quakers in the second half, Germantown Academy came away with a record of 12-3, and the team hadn't been at full strength in any of the three defeats.

Stauffer noted, "We've had some losses, but they've come against really good teams and they've made us ready for the league. Even when we get down, we don't give up - we play as a team and fight. We have a lot of heart, we have a lot of love for the game and for each other."

UPDATE: Both the Patriots and Quakers won Inter-Ac League games on Friday, with GA defeating Episcopal Academy, 49-37, and PC cruising by Baldwin School, 63-34.