Maddie Burns, a junior out of Norwood Fontbonne Academy, brings the ball upfield for the GA Patriots. (Photo by Tom Utescher) by Tom Utescher The 2019 girls' lacrosse season came to an end for area … 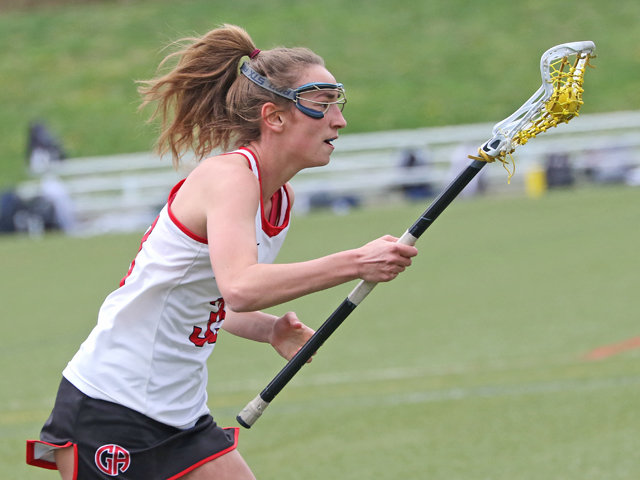 Maddie Burns, a junior out of Norwood Fontbonne Academy, brings the ball upfield for the GA Patriots. (Photo by Tom Utescher)

The 2019 girls' lacrosse season came to an end for area teams last Tuesday in the semifinal round of the Pennsylvania Association of Independent Schools tournament.

Both playing on the road, fifth-seeded Germantown Academy lost 16-12 at number one Academy of Notre Dame, while Penn Charter, seeded third, succumbed to the two seed, Agnes Irwin, 16-7.

This year's Inter-Ac League champion, Episcopal Academy (11-1), did not enter the PAIS tournament because many of the team's players would be away on a school trip.

In the quarterfinal round of the tournament, GA ended the season of fourth-seeded Springside Chestnut Hill Academy by beating the Blue Devils, 15-9. Senior Olivia Doody and sophomore Mackenzie Smith powered the Patriots with six and five goals, respectively, while SCH received a team-high four goals from sophomore Ashley Lynch.

PC won its quarterfinal bout by an 11-7 score over Hill School, the sixth seed for the tournament. A balanced attack for the Quakers produced two goals apiece for junior Leah Sax, sophomore Kaylee Dyer and freshmen Charlotte Hodgson and Lane Murray.

Last Tuesday at Agnes Irwin, the host Owls owned a 7-4 halftime lead on PC, then they widened the gap in the second half. PC head coach Colleen Magarity noted that the final nine-goal disparity between the teams was partly the result of Irwin scoring three times in the last minute of play.

Sax, Dyer and freshman Darcy Felter each contributed two goals in the Quakers' final appearance, while junior goaltender Hayley Hunt had eight saves after making 10 stops in the quarterfinal win over Hill.

The other semifinal match was taking place just a few minutes away, with GA playing at Notre Dame. The Irish jumped out in front and stayed there, although the Patriots never stopped battling. GA had the gap down to three goals several times in the closing minutes, but the teams were four points apart at the final horn.