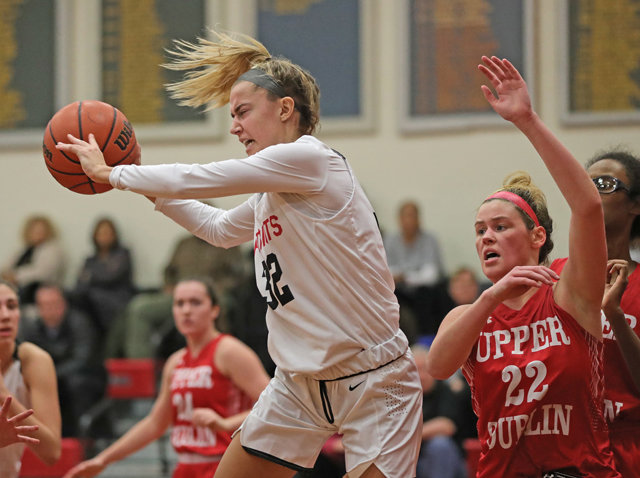 Confronted by Upper Dublin's Kara Grebe and Jackie Vargas as she tried to drive down the lane, GA senior Elle Stauffer passes the ball back outside. (Photo by Tom Utescher)

After starting off the basketball season with three double-digit wins, the girls of Germantown Academy received a more serious challenge on their home court last Monday. Nearby Upper Dublin High School, which still has members of its 2018 PIAA state championship team on the current roster, bowed to the Patriots 40-31 after trailing by only six points in the middle of the fourth quarter.

In the second half, Jaye Haynes scored 10 of her game-high 13 points and fellow senior Maddie Vizza put up six of her 10 for 4-0 GA. Junior center Becca Booth came on after the intermission to score all of her six points, while senior Elle Stauffer logged all of her eight points before halftime to pace the Pats to a 15-9 halftime advantage. Rounding out the Germantown scoring were senior Caitlyn Priore, with two points, and junior Jessica Moore, with one.

Under defensive pressure, GA missed its first four shots of Monday's game, and lay-ups by Balasa and Vargas got the Cardinals on the board. Vizza launched GA with a three-pointer from the top of the key, and two free throws by Stauffer allowed the hosts to hold a 5-4 edge at the end of a low-scoring first quarter.

Stauffer would add four more made free throws and a lay-up in the second period, while Haynes bagged a trey. The Patriots had produced just three field goals in the first half.

"They'd scouted us pretty well and they seemed to know our offense," said longtime GA assistant coach Andre Strothers, who was directing the team in the absence of head coach Sherri Retif. "I was proud of the way our girls worked to find the shots that were there."

In the halftime huddle, GA's Strothers related, "We made some adjustments because of what they were doing. We put in a few new things, added some new wrinkles. We renamed some things since they were jumping some of our plays because they knew the names. We were also looking to ramp up our intensity on defense because we needed to run more." 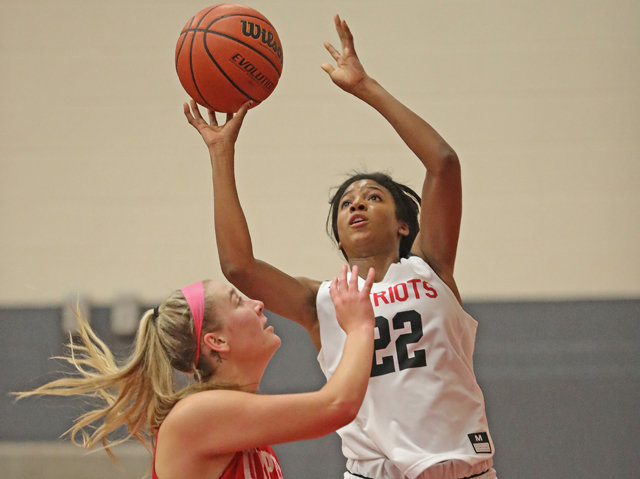 Although both teams upped their offensive output, the third quarter was a 12-12 standoff, and Germantown took a 27-21 lead into the fourth frame. At the outset, Upper Dublin was surprised by a three-pointer hit from the left corner by GA's Booth, who had scored three points with an "and-one" lay-up in the third round. The Patriots nudged their lead into double figures, 32-21, when Haynes scored in transition off of a pass from Stauffer.

The score seesawed to 35-24 at the end of the first three minutes as each team deposited three free throws (GA was in the foul bonus at this stage). With under five minutes to go Upper Dublin hit its first field goal of the final quarter, a "three" sent up from the left wing by junior Jess Polin. Next, UD's Vargas was fouled and hit both foul shots to make it a six-point game (35-29) with 3:03 on the clock.

Fronted in the paint, GA's Booth adeptly slipped a short pass to Haynes for a lay-up, and when Haynes was fouled on the open court during the Patriots' next possession, she made both free throws. The clock dropped below two minutes with the score 39-29.

GA went into a stall, then called time-out with 1:05 to go. Just a few seconds after play resumed the Cardinals fouled Vizza, who made the first shot of a one-and-one.

With 46 ticks left, a lay-up by the visitors' Vargas would set the final score at 40-31, with GA running down the clock the rest of the way.

This was the last game the Patriots would play before heading down to a major weekend tournament near Washington D.C., the She Got Game Classic in Springfield, Va.

Germantown has a very deep squad this season, with a number of girls coming off the bench who could start for many other teams.

"It's great group of girls who understand what we're trying to do," Strothers said. "They have roles, but we have an open system in regards to getting players looks. They understand that we're working together for the same goal."