Clive (left) and Oneita Thompson, who are both from Jamaica, took sanctuary at the First United Methodist Church of Germantown with the help of the Rev. Bob Coombe (right) and The New Sanctuary … 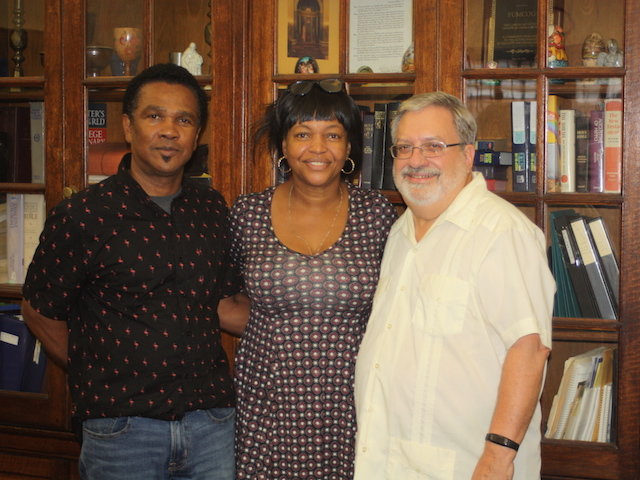 Clive (left) and Oneita Thompson, who are both from Jamaica, took sanctuary at the First United Methodist Church of Germantown with the help of the Rev. Bob Coombe (right) and The New Sanctuary Movement of Philadelphia at the end of August after they received deportation notices. (Photo by Sue Ann Rybak)

When I knocked on the back door of First United Methodist Church of Germantown (FUMCOG), 6001 Germantown Ave. in Germantown, Clive Thompson, 59, an immigrant from Jamaica came with a phone in his hand. He cautiously glanced outside the window of the door before letting me in.

Since August 28, Clive and his wife Oneita Thompson, 46, and two of their seven children, and another immigrant family from Honduras, Suyapa Reyes and four of her five children, have taken sanctuary in FUMCOG. The Rev. Bob Coombe, pastor at FUMCOG, said both families have taken physical sanctuary at the church to prevent them from being deported and separated from their families.

While Immigration and Customs Enforcement (ICE), a branch of the Department of Homeland and Security, legally has the right to arrest illegal immigrants anywhere, according to policy guidelines known as “Morton Memos” created in 2011 by John Morton who was the director of ICE at the time, the agency should avoid making arrests in “sensitive areas” such as churches, schools, hospitals and colleges.

Clive and Oneita recently sat down with the Local to share their story and talk about what it’s like to live in sanctuary.

Oneita, 46, became emotionally distraught as she talked about how her brother Christopher Lewis, a master tailor who was murdered in Jamaica in retribution for refusing to join the gang and contribute to their cause. He was only 28 years old.

A few years later, members of the same gang burned Oneita and her family’s farm to the ground, when her husband Clive, now 59 years old, also refused to join the gang and “contribute.” The family applied for asylum in the United States and settled in Cedarville. N.J. In 2009 the couple lost their case for asylum and their appeal a couple of years later.

“This is our home,” Clive said, referring to the United States. “I love it. For over 15 years, we worked, paid taxes, and never got in any trouble. They said, ‘We overstayed our time.’ I don’t know what that means. They are trying to say: ‘You are illegal.’ I don’t count as a human being. I don’t think any person can be illegal.”

He sighed and said, “It’s about my kids. They mean a lot to me.”

Oneita said even as a young child, she remembered hearing adults say, “Oh, America is the land where you can be free from bondage and oppression. This is a place where they love children, the elderly and family.”

“Right now, it’s really hard for us to give up our freedom while we worked and paid taxes here,” Clive said. “We went about our business like other people. Now, we have to stay in one place. It’s like living in a prison.”

He said it was really affecting the children (who are American citizens).

“We have to try really hard to calm them because they can’t go see their friends or go places like they used to,” he said. “They don’t understand that we don’t have income coming in anymore.”

“If we leave them back here (in the United States), we don’t know what is going to happen to them,” he said.

Oneita said she often wonders: “Does ICE and this administration really know what they are doing to families? That the only thing we can do is go into sanctuary to be safe with our children.”

She worries about the long-term effects of stress on her children.

According to the Center for Law and Social Policy (CLASP), a nonprofit agency that offers policy solutions to low-income families, one-fourth of children living in the U.S. have at least one immigrant parent and “88 percent of these children were born in the U.S.”

Peter Pedemonti, co-founder and director of the New Sanctuary Movement, said currently there are three families living in sanctuary in Philadelphia. This includes the Thompson family and Reyes and four of her five children also living at FUMCOG.

Pedemonti said both families have notified ICE of their location. Reyes, who is from Honduras, also experienced gang violence and came to the United States seeking asylum.

The third family, Carmela Apolonio Hernandez and her four children, are in sanctuary at the Church of the Advocate at 20th and Diamond Streets in North Philadelphia. Recently, Hernandez and her oldest daughter Keyri risked deportation when they left sanctuary and made an urgent plea for support from U.S. Sen. Bob Casey.

Pedemonti said seeking sanctuary is an act of civil disobedience.

“Why sanctuary is being used to stop individual deportation and keep their families together, it’s also about raising this issue and showing people the damage and the impact of the Trump Administration’s Immigration Laws,” he said. “It’s a way to call attention and challenge those extremist laws.”

He said now is “a critical time” for people to get involved in the Sanctuary Movement. Currently, the organization is collecting petitions to “put pressure on ICE to prevent them from separating immigrant parents and their children.”

When the Local asked Pedemonti to comment about immigrant parents and children being separated at the border, he replied that “horrendous behavior was sort of a window into how immigration and our government treats immigrant people in Philadelphia and across the country every day.”

“We are in court almost every single day, working with families who have had a loved one taken out of their home, placed in detention or deported,” he said. “This sanctuary case [at FUMCOG] is a local example of what is happening every day across the country and at the border.”

Pedemonti said the Thompson family case and the Reye family case demonstrates that “these immigration laws impact all different types of people.” Pedemonti said he doesn’t understand how you could implement an immigration policy like this, “if you thought they had the same emotions and experiences as you did, especially as a parent.”

As the leaves begin to change colors outside the window of FUMCOG’s office in Germantown, Oneita believes God will not abandon her and her family. She recently recalled sitting in church reading a passage from the Bible.

“As I read it, I was reflecting,” she said. “I interpreted in my life as we are here [in sanctuary], and it feels so dry as if there is no hope, but Jesus says, ‘Can you believe that in this situation this will happen?’ I said, ‘Yes, Jesus, I believe.’ And he said, ‘Well, then speak to it.’ So, now I feel like I should speak to anybody who would listen to my story. Even in my current situation, I know that if there is a will, there is a way. I know it only takes the stroke of a pen to say, ‘These people can live here and be free.’”

FUMCOG invites the community to come meet the Thompson family, enjoy a plate of Jamaican style food for a small donation and learn more about the New Sanctuary Movement of Philadelphia on Oct. 26. For more information, call 215-438-3677.