Fang Fang, who was a professional cello player with one of China’s top orchestras, recently began teaching with the Chestnut Hill Music Academy. Also a talented painter who likes both traditional … 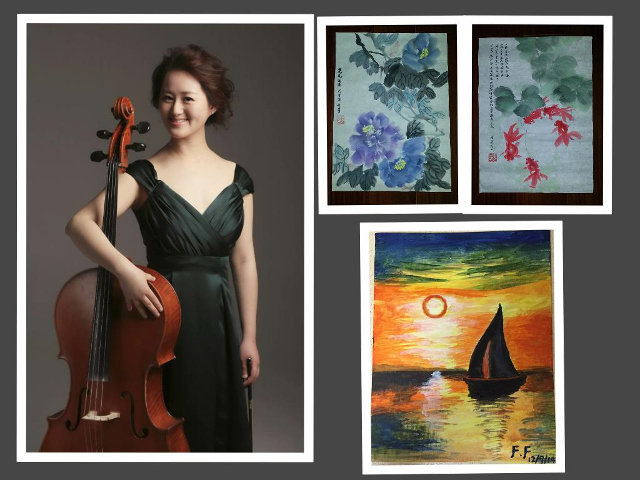 Fang Fang, who was a professional cello player with one of China’s top orchestras, recently began teaching with the Chestnut Hill Music Academy. Also a talented painter who likes both traditional Chinese painting and European oil painting, Fang is seen here with some of her own artworks.[/caption]

It can’t be too easy to give up a successful career and everything you have ever known to voluntarily move to a new land with a new language and culture. But Fang Fang lives to make beautiful music and to challenge herself.

Fang, 35, who was born and raised in Nanjing, China, and went to college at the Hong Kong Academy for Performing Arts, received a B.A. in cello performance in China. Fang comes from a very musical family. Her mother is a cellist who has played with the Jiangsu (State) Symphony Orchestra in Nanjing, and her father is an Erhu player (Chinese traditional instrument). An older brother in China is a professional violist.

Fang began to play the piano when she was 5 years old, then began learning the cello from her mother when she was 7. After college she wound up working in a Shanghai orchestra, one of the finest in China, for eight years as associate principal cello. Everything seemed to be on the right track for a long and successful career, but Fang told us that “my heart told me it was not my future. I just wished my life to be different. I guess I am a girl with a little desire to explore the unknown parts of the world, and I believe everyone should embrace new concept and adventures.”

So Fang took a giant leap of faith. She quit her orchestra job in 2013, moved to the U.S. and studied with professor Thomas Landschoot at Arizona State University, eventually graduating from the university’s Herberger Institute for Design and the Arts with a masters in cello performance.

“I was fortunate to have met some of the best classmates and instructors,” said Fang, “and my heart was very full when I thought of them. I could not have completed the degree without their tremendous encouragement and support … I guess my English was worse when I came to this country than now. But I was grateful as everybody around me seemed to be very forgiving. Plus, I guess music is the universal language for all of us.”

Fang left Arizona just four months ago to come to Philadelphia to be with her boyfriend, who works at Children’s Hospital of Philadelphia. They currently live in an apartment near the Art Museum, but Fang was recently hired to teach at the Chestnut Hill Music Academy. “I found their website when I graduated, and I received a warm welcoming from Mickey (Leone, who runs the school) when I contacted him.”

Fang has more than 10 years of teaching experience. One of her students in Eastern China was awarded 1st Prize at a cello competition in 2011. According to Leone, “Her formal education as well as her performing experience got my interest … I found that she has an incredible passion for children and teaching. Then I heard her play the cello. It was incredible. She is quite an amazing musician. She also has a sweet temperament.”

“I am sincerely looking forward to meeting some more friends here,” said Fang. “I always believe it (making new friends) would not be too hard if you really try. But it certainly takes time.”

The hardest thing about adjusting to life here so far has been finding a full-time job. (The job at the Chestnut Hill Music Academy is part-time.) The supply of classically trained musicians far outstrips the demand for them in orchestras that actually pay salaries. “Because the market is very competitive,” said Fang, “it is hard to find a proper job in an orchestra in the U.S.”

In addition to her extraordinary talent as a cellist, Fang is also a fine self-taught painter who actually wished as a child than she could have a career as an artist even more than as a musician. Fang likes traditional Chinese painting and European oil painting, particularly Impressionist paintings. Her favorite artists include Van Gogh and Monet. Fang has not sold any paintings yet, “but I wish I could draw with children; that would be a lot of fun.”

Recently Fang began working with her first student in Chestnut Hill. “Her name is Sienna, and she is a very bright girl in cello!”

Fang often video-chats with her mom. “She is the most important person to me. She has always been supportive of me, and I miss her very, very much…

“Although I have only lived in Philadelphia for four months, I am falling in love with the city, where every corner is filled with arts. Just like tens of thousands of other people I see everyday, I’ve been chasing my own dreams. I tell myself that I will make my wishes come true one by one, and I don’t want to have any regrets in life.”