From Chile to Chestnut Hill with love (and stunning art)!

Paula’s eye-catching works of geographic shapes will be on display at the Center on the Hill, 8855 Germantown Ave., from Feb. 1 through 28. A special “meet the artist” event is scheduled for …

From Chile to Chestnut Hill with love (and stunning art)! 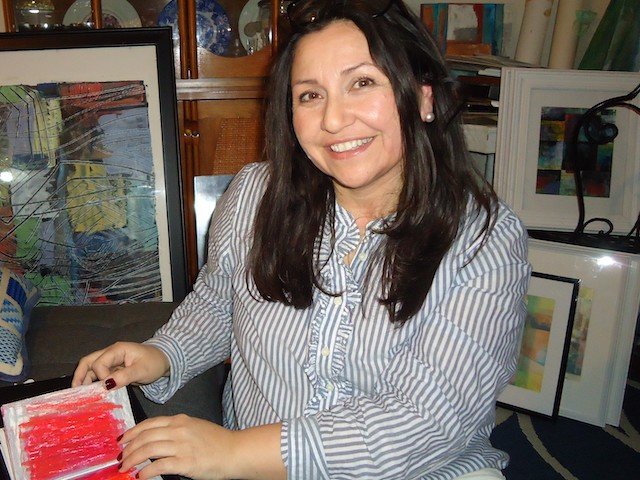 Paula’s eye-catching works of geographic shapes will be on display at the Center on the Hill, 8855 Germantown Ave., from Feb. 1 through 28. A special “meet the artist” event is scheduled for Feb. 8 from 6:30 to 8 p.m. (Photo by Elizabeth Coady)[/caption]

Paula Marcela Andrade’s paintings are like changing moods captured on canvas and board. Abstraction is the métier of her patterned textured squares and jagged curves that evoke contemplation and which she says were inspired by the death of her beloved father.

The 40-something mom of an 11-year-old son, who teaches Spanish to preschoolers at the Presbyterian Church of Chestnut Hill, has been painting since she was a little girl wanting to emulate her big sister. “My sister was taking painting lessons and would not allow me to take art lessons with her,” Andrade shared in an email. “I was always the annoying younger sister wanting to do what my older sister did. My sister wanted this to be her 'special thing,' so when she wasn't watching, I would paint her canvases. I thought she wouldn't notice, and of course, she did!’’

Painting is now Andrade’s very special thing. Her works of geographic shapes will be on display at the Center on the Hill, 8855 Germantown Ave., from Feb. 1 through 28. A special “meet the artist” event is scheduled for Feb. 8 from 6:30 to 8 p.m.

The native of Curico, Chile, came to the U.S. as a foreign exchange student in Ohio, then stayed on and received her bachelor’s degree in fine arts from the Columbus College of Art & Design. After graduating, she worked for the publisher Prescott Hall, photoshopping artworks and also hand-painting wallpaper for an Ohio design company.

“Curico is a small town. It is the agricultural area of Chile with many wine valleys, large orchards and beautiful mountains. Chile is such a beautiful country. No matter where in Chile you are, you can always rest your eyes on the mountains or valleys.”

Paula moved from Ohio to Florida to be closer to her family, then later relocated to Orange County, California, to be close to a good friend. She eventually settled in Philadelphia, where she has spent the last seven years either teaching art or Spanish to children.

Work and the demands of being a mother kept the paint brushes at bay for a couple of years. But she was moved to pick them up again after she lost her father last January, who she said died two days shy of his 80th birthday from a heart attack. “I felt such a sense of urgency after his death,” said Andrade, who has opened a shop on Etsy (which sells handcrafted and/or vintage items), HouseWrenStudio, named after the nickname her father gave her when she was a child. “I felt ‘Now’ is the moment to do all the things I love in life.” 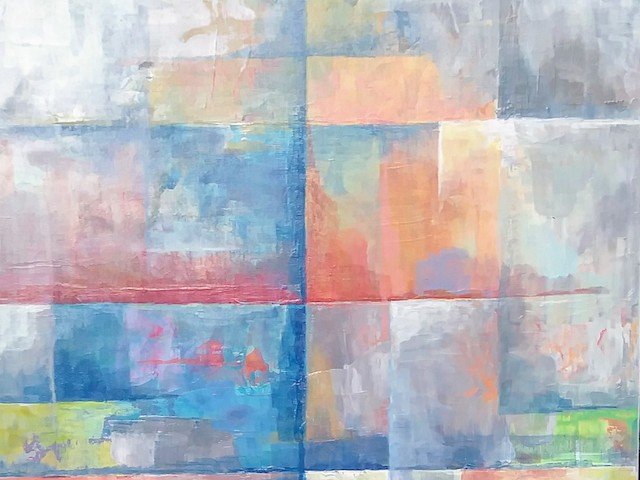 Andrade took a few minutes out of her hectic schedule to answer some questions about her background before her exhibit opens:

• How did you wind up in Chestnut Hill?

“I wanted a safe place for my son and me. We fell in love with the cobblestones, historical buildings and the centenary trees here in Chestnut Hill.”

• How long have you been painting?

“I decided to be a foreign exchange student in a small town, Delaware, Ohio, after I met an American young girl at my high school in Chile. Her name is Renee Merritt, and she is now my closest friend. When I started school at Delaware, I took an art class, and this is when I realized that I had above average skills to draw. It was this set of skills that allowed me to obtain my BFA in 1994. I was awarded an almost full scholarship to study art, which has always been a part of my life.

“As a child, I would take such a delight collecting things and looking at them over and over. I collected seeds and made necklaces with them. I had a huge collection of paper napkins from all over the world; silk napkins were my favorite. And I loved rocks and river stones. I kept them under my bed, and when they got insanely big, my mom ended my collection. I come from a family of creative individuals, and now my little boy has the gift of being creative. I currently teach Spanish to preschoolers at Presbyterian Church of Chestnut Hill, and art is part of our daily lives. Children are such fearless artists! One can draw so much creativity just being around them!”

• What are your favorite materials?

“At the moment, acrylics, but I love oils, oil sticks, ink, watercolors, wood panel, little canvas pieces to construct one piece, and linoleum blocks are such a wonderful material. I have not even begun to uncover the possibilities of this material … If I died and went to heaven, my heaven would have an endless supply of art materials, and free of cost, of course!”

• Do you have any favorite themes in your artwork?

“I love details and patterns. I see the world in patterns. It could be patterns on a wall, antiques, textiles, needlepoint, cobblestones, rocks, patterns of buildings, especially abandoned ones. I see these buildings on my trips to Center City from Wyndmoor station or St. Martin’s. Simple machines, trains, especially Victorian ones. Tree branches, leaves, seeds, the list is endless. The foundations of all my pieces are rectangles ... I love acrylics; using them allows me to work on multiple pieces at a fast and rigorous pace if I want to.” 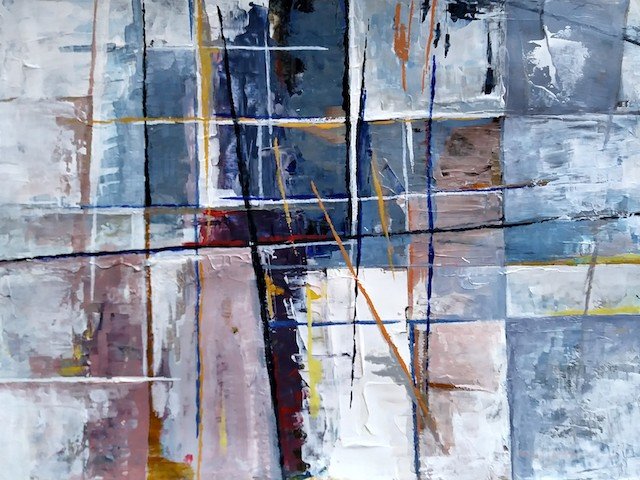 This is “Marina at Nantucket,” acrylic on multi-media paper and painted with palette knife and brushes.[/caption]

• What painters do you admire the most?

“There are so many, but one of my favorites is Paul Cezanne with his landscapes. Also Chaim Soutine and his rich use of paints. Georgia O'Keeffe and her New York paintings ... Mary Cassatt and all her paintings that were influenced by Japanese prints, Alfred Sisley, Egon Schiele, Diego Rivera, Frida Kahlo, Berthe Morisot, Millet, Van Gogh. The list is very long.”

• How would you describe your work?

• How many exhibits have you been in prior to the one scheduled for February?

“I had one art exhibit at the Ohio Art League in Columbus, Ohio. I was part of 'Aqui Viven Mis Suenos' (here lay my dreams). This show was only for Latin American artists. I exhibited my photography pieces. Nudes. I had a good review.”

• Are you excited about the upcoming exhibit?

“I am so happy. I have been working on my show since I created my Etsy store on line House Wren Art ... I felt such a sense of urgency after my father's death ... Time is precious. I always thought I have so much of it, but we really don't know. There is no time to be afraid anymore! There are so many more things I want to do. So many more art ideas to play with, and I am just getting started!”