From a crack house and mom's drug overdoses to success

Jawara Griffin (right) is seen with Swoop, the Philadelphia Eagles’ mascot, at the 11th Annual Children’s Awards, where he was recently presented with the Alumni Award at Northern Children’s …

From a crack house and mom's drug overdoses to success 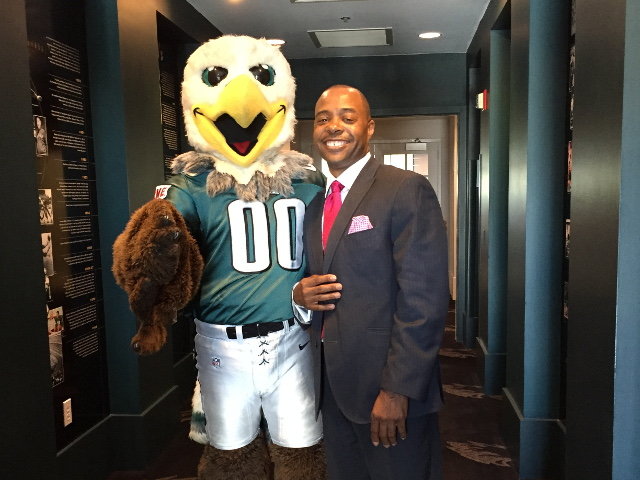 Jawara Griffin (right) is seen with Swoop, the Philadelphia Eagles’ mascot, at the 11th Annual Children’s Awards, where he was recently presented with the Alumni Award at Northern Children’s Services in lower Roxborough. Griffin overcame a very difficult childhood to become a straight-A student in college and then a lawyer.[/caption]

“No matter what you are going through today, I promise you, you will all be winners in life,” said Northern Home alumnus, Jawara Griffin. He directs this motivational promise towards the young people currently enrolled at Northern Children’s Services (formerly Northern Home for Children), 5301 Ridge Ave. in lower Roxborough, while reflecting on how his time at Northern gave him the confidence to overcome a tumultuous past and taught him to set goals for himself, one jump shot at a time. (Ed. Note: Northern is a non-profit that does a great job improving the lives of troubled inner-city kids and stabilizing their families.)

Griffin, now 40, spent the first 12 years of his life struggling to find a place to call home as he spent his childhood moving from abandoned buildings to a crack house and ultimately, when his mother overdosed for the third time, he landed at the doors of Northern Home, which during the early '90s had a residential program that housed young boys. “I came prepared, and that was it. I was 12 years old making these life decisions,” said Griffin, recalling his arrival at Northern Home.

Not only did Northern give Griffin stability and a permanent residency for the next six years, but “it also gave me confidence.” That confidence bloomed in Griffin’s favorite space in his new home. The gym.

“I lived in the gym. Basketball was my escape, my release. It started with just me going there. Then various staff would play with me and help me get my game together,” said Griffin.

His talent on the court did not go unnoticed. He began playing for the Braves, Roxborough’s local basketball team. “Northern gave us avenues, and everything was in place,” said Griffin, describing the structure Northern provided its residents.

That structure not only helped Griffin perfect his basketball skills, but it also taught him self-discipline. He landed a job at the McDonald’s in Andorra and maintained good grades at Roxborough High School.

“I got into a routine (at Northern),” Griffin said.

When he turned 18, Griffin was recruited for the basketball team at Mansfield University, and his social worker drove him four hours north to the campus. “He shook my hand and said good luck,” said Griffin. (Ed. Note: Mansfield University of Pennsylvania is a small, public, liberal arts university with about 2,800 students located in the borough of Mansfield, Tioga County. It is one of the 14 state universities that are part of the Pennsylvania State System of Higher Education.)

Griffin tackled this life change with poise, riding on his courage and resiliency, character traits challenged and ultimately strengthened during his years at Northern. “Any impact of staff had a positive influence on my life. It was all to my benefit,” he said.

After graduating from Mansfield with straight A’s, Griffin challenged himself on the other side of the court, making the decision to attend law school. When asked what prompted his decision, he explained that he recalled a vivid childhood memory that his family believed he would be a lawyer when he grew up.

“In law school I won every award possible. I had never won an award before in my life,” said Griffin, now a public defender in Maryland.

He credits Northern Home for fostering direction as he continues to accomplish his goals, and through the power of the spoken word, he tries to motivate the children currently involved with Northern to set their own goals at ensuring their successful futures.

“Do not let your current latitude determine your altitude,” he said, explaining to the children that where they are today does not determine where they are going to be tomorrow. “I see it as an obligation to visit the kids now. There is power in motivation. I can relate to these kids.”

Now, thanks to this Northern Home alumnus, public defender, father and soon-to-be author (Griffin is currently 100 pages into writing his memoir), many of the kids who listen to his inspirational messages and who apply Griffin’s wisdom, as Northern helps guide them in the direction of their dreams, are already winners in life.

Sarah Neiman is currently a marketing and communications intern at Northern and a student at Gwynedd Mercy University. More information at 215-482-1423 or www.northernchildren.org.

The 36th Annual Fall for the Arts Festival, September 26

Where the Haws Lane Development Stands

A Look Back at “Rango”