A conversation with Ruffian Tittmann, the Executive Director of the Friends of the Wissahickon, and Bill Valerio, the Patricia Van Burgh Allison Director of Woodmere. 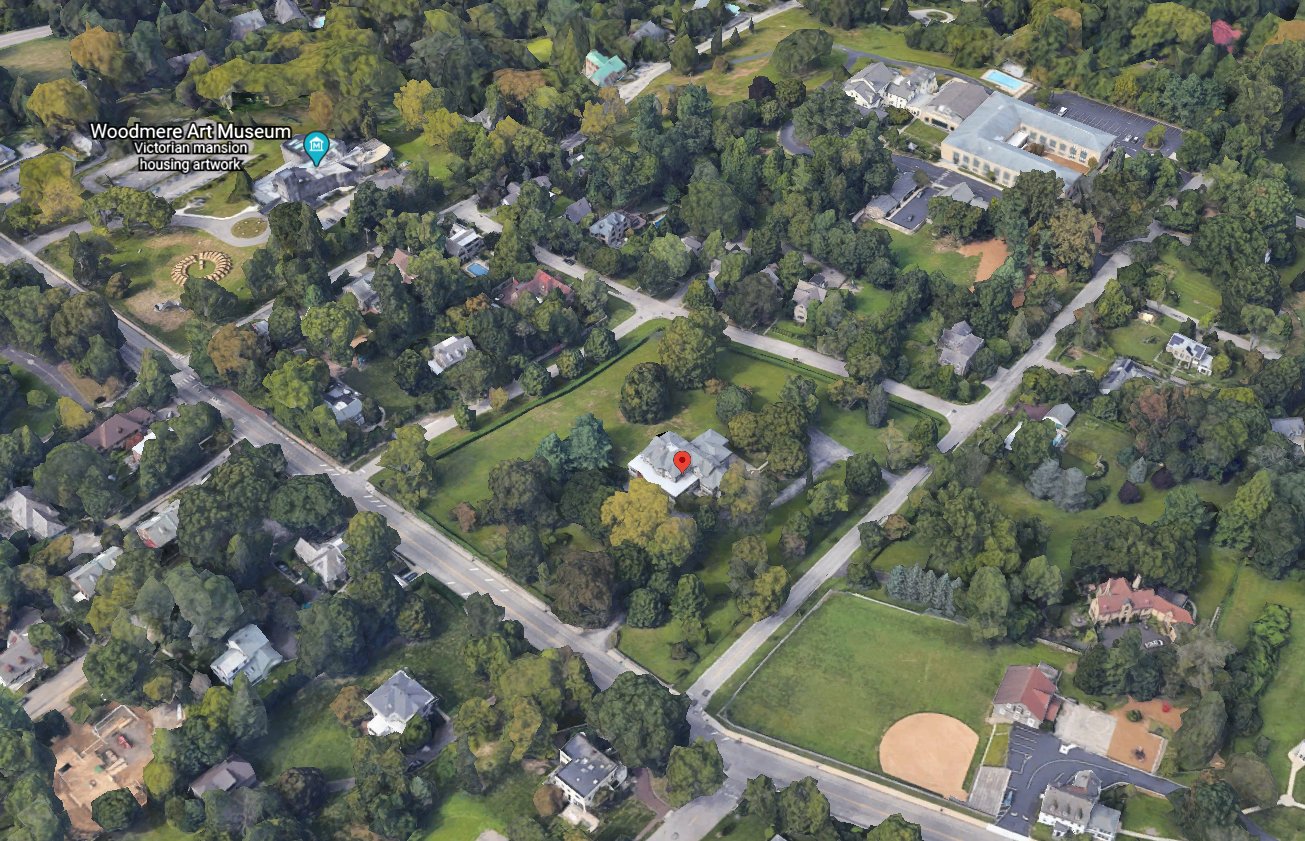 St. Michael’s Hall (marked by a red pin) can be seen here amid its canopy of trees, occupying a four-acre block in Chestnut Hill. Woodmere Art Museum, located close by to the left in this image, hopes to purchase St. Michael’s Hall for expansion. (Image: Google Earth)
Posted Wednesday, April 14, 2021 11:00 am
by William Valerio and Ruffian Tittman

With regard to the effort to save St. Michael’s Hall, Bill Valerio, the Patricia Van Burgh Allison Director of Woodmere, recorded a conversation with Ruffian Tittmann, the Executive Director of the Friends of the Wissahickon. As the Local reported in previous issues, the museum is presently working to secure funding to purchase the property at 9001 Germantown Ave. from the Sisters of St. Joseph, who have used the property as a residence. The Sisters have given Woodmere until April 25 to make an offer. – Ed.

Bill Valerio: Hi Ruffian, I'm so grateful for FOW's collaboration in Woodmere's effort to save St. Michael's Hall.  There’s a great deal of development pressure in Chestnut Hill right now. Off the top of my head, I can think of 45 units that are currently in process or scheduled to be built. For this reason, the environmental considerations associated with the future of St. Michael's four acres are important. I have in my possession a subdivision study that shows how the roughly square-shaped property can be cut up like a pizza with 20 slices around the periphery and three at center on the footprint of the existing mansion, which, in this scenario would be razed. There would be community review, and City Planning and L&I zoning would be the final arbiters, but the study accounts for the avoidance of existing slopes and, as I understand it, represents the as-of-right development opportunity.

Ruffian Tittmann: Thank you, Bill, for focusing on the environmental considerations associated with the development of the site. Let's first talk about the specific location in relation to the Wissahickon watershed. St. Michael’s Hall is located roughly in the center of the Wissahickon Watershed, meaning any water not infiltrated into the ground eventually drains into the Wissahickon Creek, which contributes to the drinking water supply of the City of Philadelphia. There are additional protections to the general zoning code, but even so, with these designations a property may still have significant impervious surface added.

Let me add that both the Friends of the Wissahickon and the Chestnut Hill Conservancy specifically recognize the four acres of St. Michael’s as a priority parcel for open space protection within the Philadelphia portion of the Wissahickon Watershed.

Bill: Can we talk about stormwater?

Ruffian: Yes, stormwater!  With the addition of impermeable surfaces like driveways, hardscape and rooftops, there will be more stormwater flowing downstream through existing residential properties and through the forest slope. This increases the likelihood of flood events, wet basements, the collapsing of hillsides and streambanks, the washing out of trails and the destruction of the natural habitat.  One of the most positive aspects of Woodmere's proposed use of the property (beyond all the great art!) is the preservation of the accessible green space.

Twenty-three units (or even half that amount) would represent a great number of vehicles on the four acres, not to mention daily postal deliveries, Fed Ex, Amazon packages and sanitation pickups. All of this represents alot of activity and carbon exhaust particles in the air, some of which we end up breathing and some of which finds its way to the ground. Another problem with stormwater runoff on parking surfaces is the gasoline drippings from cars. The St. Michael’s property flows into Hillcrest Run (also known as East Brook), the stream that traverses Bell’s Mill Road and passes through Morris Arboretum to the Swan Pond and beyond. We have been encouraging conservation easements on properties like St. Michael’s that have a direct impact on Eastbrook, not only to keep the water clean, and because we eventually drink that water, but also to protect the beauty of this rare urban landscape and the health of the habitat.

Bill: There are some important heritage trees on the site. Can we talk a bit about the tree canopy?

Ruffian:  This is an important issue.  The Philadelphia Tree Canopy Assessment (treephilly.org) assessed the city’s tree canopy over the 2008-2018 time period and found that Philadelphia lost 6% of its Tree Canopy.  As that report notes, preservation of the existing canopy is the best way to secure our future tree canopy. The benefits of mature trees cannot be overstated, and the loss of mature trees is not immediately made up with the planting of new trees.

And of course, Bill, I know that you love trees and would be adding to the canopy of the St. Michael Hall parcel with local species. The combination of old and new trees ensures the long-term health of the birds, insects, and microorganisms that are essential to sustaining the balance of the ecosystem.

Bill: Thank you again, Ruffian. It’s great to have partners like the Friends of the Wissahickon and the Chestnut Hill Conservancy. I’m very grateful for the powerfully collaborative community spirit. Thanks for taking the time with me!