Edith Boyd by Brendan Sample In her 25 years of living on Ardleigh Street, former Hiller Edith Gallagher “Dee Dee” Boyd was able to gather plenty of inspiration for her later career as an author. … 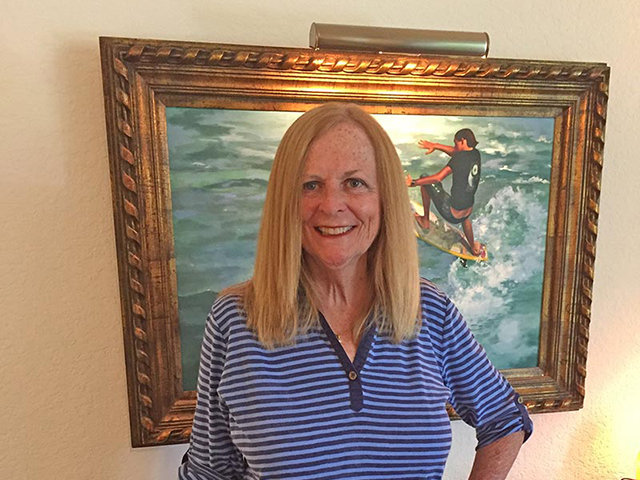 In her 25 years of living on Ardleigh Street, former Hiller Edith Gallagher “Dee Dee” Boyd was able to gather plenty of inspiration for her later career as an author. After more than six years of writing short stories, about 25 of which have been published in various literary magazines, Boyd has now self-published a collection of her stories titled “Dancing in Winter and other stories.”

Among the stories collected in this book is “The Gravers Lane Local,” which is, among Boyd’s other works, the one most directly connected to her time growing up in the area. She distinctly remembers commuting on the Chestnut Hill East Line, which included a stop on Gravers Lane, and enjoying the slow nature of all the stops on this local train ride.

Though Boyd did do some writing before the spring of 2012, she doesn’t fully count anything she did before then, as it took the death of her uncle during that time to get her to really launch her career as an author. Boyd credits her uncle, to whom she dedicated her book, as another one of her most significant influences, as he taught her plenty of important lessons about writing. Those lessons ultimately helped her to get her first story published in the fall of 2014.

“One thing he always told me was to show and not tell in my stories,” Boyd said. “Wherever I lived he always seemed to be around, and so when he passed in 2012, I just started writing and haven’t stopped.

“I don’t want to lie about the number of times I’ve been rejected, but I’ve always been very persistent and tenacious, and that’s also led to a high level of success in getting my stuff published.”

While Boyd has certainly had plenty of outside factors that have influenced the style and content of her writing, she ultimately sees it as a therapeutic way of dealing with certain personal issues.

“It’s a catharsis for some interior conflicts of my own,” she said. “It’s a way to helpfully express myself and it has a liberating effect on my psyche. People have seen me as noticeably happier than before since I started writing.”

Boyd describes her writing style as straightforward without being too “floral,” as she prefers to get to the conflict of the story sooner rather than later. She writes most of her stories from a female perspective, as she feels that that makes it easier for both her and many young women to understand the plot. The first story in the collection, however, is from the perspective of a 17-year-old male basketball player, which is the only story she has done from a male perspective.

This is the first published book that Boyd has ever done, though she did make a point to specifically mention and credit the literary magazine where each story initially appeared. With this book now completed, she plans to not only continue writing short stories, but is also working on a novel. The latter, however, is only in the first few months of its lifespan, so nothing is imminent with the novel, giving her plenty of time to put the proper work into it.

Boyd currently lives with her family in Jupiter, Florida, as a trip to Hawaii with her husband for their 10th anniversary influenced her to move to a warm climate. Though she has not been back to Chestnut Hill since 2011, she still has plenty of fond memories of spending time at McNally’s and Campbell’s Place, playing at the Water Tower and taking in the sights of the holiday season.

“When the lights came on at Christmastime on Germantown Avenue, they were so tasteful,” Boyd said. “There’s just nothing prettier in the world than Chestnut Hill before Christmas.”

“Dancing in Winter and other stories” is currently available for purchase on Amazon.

Brendan Sample can be reached at brendan@chestnuthilllocal.com