Chris Plant by Kevin Dicciani If you don't live in Philadelphia, you should – or so says Chris Plant, founder of MovetoPhilly.com. And Plant would know. Born in Wheeling, W. Va., Plant, 46, has … 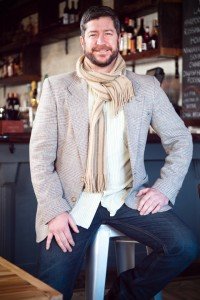 If you don't live in Philadelphia, you should – or so says Chris Plant, founder of MovetoPhilly.com.

And Plant would know. Born in Wheeling, W. Va., Plant, 46, has seen his fair share of the United States. His family moved from West Virginia to Carlisle, Pa., then to Washington, D.C. From there, he moved to Philadelphia to attend Temple University, where he remained for two years until dropping out and living a somewhat vagabond existence.

He fixed houses and scuba dived in Key West, cooked in Tel Aviv, and worked at a ski resort in New Hampshire. Then Plant decided to go back to school, enrolling at the Massachusetts College of Art in Boston and earning a bachelor's degree in sculpture and painting. Soon after graduation, Plant began doing lighting design for dance companies and moved to Manhattan, living there for a year until moving to Brooklyn.

At that time, Plant said, Brooklyn was the affordable alternative to living in Manhattan, but soon that would change. During the six years he lived there, he saw the borough undergo a radical transformation in which real estate prices rose and the cost of a comfortable living became increasingly expensive. Because of this, Plant felt the reality – financially and personally – was complicating his long-term aspirations of owning real estate and living a comfortable life.

“It became clear to me that I was probably not going to be in a position where I could afford to own real estate,” Plant said. “I wanted to own real estate and help control my own fate. I didn't want to be a renter for life. But the prices of property in Brooklyn were going through the roof, so I looked at my options.”

Plant said he wanted to maintain a close proximity to New York for business reasons. He and his wife, Jessica, started looking for homes in upstate New York, Jersey City and other places within the city's radius. Having attended Temple, Plant was familiar with Philadelphia and felt that, more so than any of the other cities he was looking into, it represented a much better lifestyle.

“I wanted to be in a world-class city, but I wanted to be able to afford it, and that was Philadelphia,” Plant said. “I thought about going back to Boston or D.C., but those cities with a high cost of living are prohibitive to living a real life.”

Plant eventually moved to the Bella Vista section of the city for a year before he bought a home in Mt. Airy with Jessica and their two children, Morgan and Mason. Shortly thereafter, Plant began his career as a real estate agent with Elfant Wissahickon Realtors. As he settled into Philadelphia, Plant became proactive in the nonprofit world, serving as a board member for HiddenCity Philadelphia, CultureWorks of Greater Philadelphia, and board vice president for Franklin's Paine Skatepark Fund.

In the beginning, Plant discovered that the city fulfilled all of his needs and wants. He could not imagine going back to the days of paying outlandish prices for real estate and recreation. He understood the allure of places like New York City, but as he became more invested in real estate and studied property values in Brooklyn, that allure seemed to fade – the prices were just too surreal.

“They were crazy,” he said. “Up there, a million dollar house is a two-bedroom condo on a fifth floor walk-up that doesn't even have parking. Here it gets you a gorgeous house with four bedrooms, a driveway and acres of land.”

After Plant read a 2005 New York Times article entitled “Philadelphia Story: The Next Borough,” which detailed the influx of people living in Philadelphia who commute to New York for work, he realized this trend was financially practical, and becoming more of a familiarity.

“I thought, 'This is real,'” Plant said. “For artists, musicians, designers, anybody who is trying to craft their own lifestyle, it just made a lot more sense to live in Philadelphia. Even if you wanted to be in New York all the time, it still made a lot of sense to live down here and rent a beautiful two-bedroom apartment and live really well as opposed to paying incredible amounts of money and living somewhere not that nice and never being able to go out and do anything because it's too expensive.”

It was during this time that the inspiration for MovetoPhilly.com was taking hold, although it was originally entitled BrooklyntoPhilly.com, which focused solely on people from Brooklyn. But, after some time, Plant realized that he should be trying to reach other places, too, as Philadelphia is a viable place for anyone to live.

“Philadelphia is the only major city on the East Coast that has an attainable lifestyle for a regular person,” Plant said. “Add to that the Barnes Foundation, the Art Museum, great sports teams, world-class chefs, musical acts, and virtually anything that Brooklyn or New York City can offer, and you have a perfectly livable, affordable, awesome city. I'm not putting down those places or any city, that's not my point. I'm just saying that living in Philadelphia is easier, the quality of life higher.”

The world is waking up to Philadelphia and its “awesomeness,” Plant said. He regularly receives emails from people all around the country – and world – who visit MovetoPhilly.com and want to know more. Sometimes it's just people looking for more information, but other times, and what is occurring more and more frequently, he is getting requests from people to visit the city. If they do, and they want, Plant will personally take visitors on what he calls a “four-corner” tour of Philadelphia – which encompasses the Northwest, Northern Liberties, South Philly, Graduate Hospital and Point Breeze. The tour showcases the towns within the city, their histories, the diverse landscapes. One minute you're in Rittenhouse Square, the next you're entangled in the trees of the Wissahickon.

Plant also helps those visitors who are trying to move to Philadelphia by putting together a document composed of data that spells out the overall costs of their lifestyle in comparison to what they would look like if they lived in Philadelphia. In this, Plant broadens the conversation and makes it a question less about property values and more about the kind of lifestyle you want to live. He takes all things into account – from how much you spend a month on electricity to how much time you waste sitting in traffic.

“We lead a lifestyle that is very similar to what made New York City, particularly Manhattan, such a great place to live back in the day,” Plant said. “The old-timers in New York are now lamenting how expensive New York is and saying, 'We can't afford to do all of the things that made New York awesome anymore.' But you can do that here.”

The ultimate goal of MovetoPhilly.com, for Plant, is to help people discover the benefits of living in Philadelphia and see that they find an affordable place to call home, just like he did so many years ago. Often, he uses his own story of being an outsider who moved to Philadelphia as an example of what can happen if you put yourself in the right place at the right time. And, according to Plant, now is the right time.