Foolish Waffle maidens, Robin and Flo, are not foolish when it comes to creating waffle dishes. (Photo by Ryan S. Brandenberg/ Temple University) by Len Lear If you stop at the outdoor Chestnut Hill … 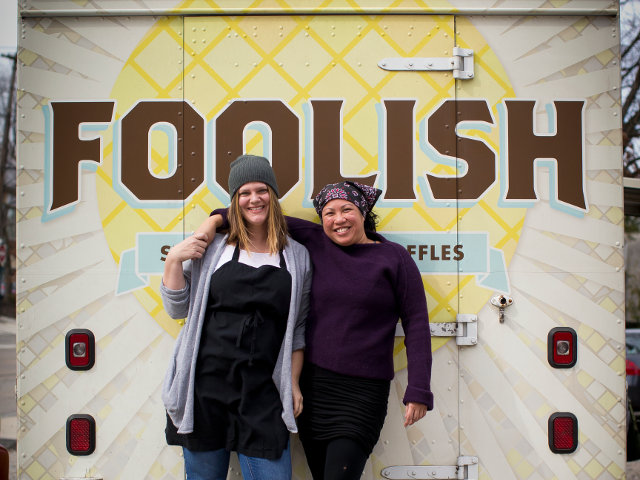 Foolish Waffle maidens, Robin and Flo, are not foolish when it comes to creating waffle dishes. (Photo by Ryan S. Brandenberg/ Temple University)

Robin Admana, 41, is the chef/operator and co-owner, and Flo Gardner, 39, is the co-owner of Foolish Waffles, which has been operating in Chestnut Hill in the mild weather months.

In 2014 they won a "Best of Philly" for their bahn mi waffle, and on June 13 of last year, for the first time in the five-year history of the event, a single truck won both the People’s Choice award as well as the coveted Vendy Cup in the annual Vendy Awards, the city’s yearly celebration of the best in mobile eateries.

That double-winning truck was Foolish Waffles, which won both awards on the strength of their pork belly bahn mi waffle, a delicious take on the Vietnamese sandwich that has everything you would expect, but it is all set on top of a fluffy waffle.

How on earth did the award-winners come up with the name Foolish Waffles? “We initially started with Frolic Waffles,” explained Flo, “which ended up being too similar to a waffle shop in upstate New York. So we decided on Foolish Waffles because we want to encourage people to have a little fun while eating our waffles! Plus, we all act a little foolish when we’re together working on the truck. We laugh and say that it’s not only a state of being on the truck, but it’s kind of a requirement.”

Robin also graduated from the Culinary Arts program at the Art Institute of Philadelphia and has taken cooking classes during all her travels in Asia. She grew up with a love of baking and did most of the baking at a small café where she worked. Later she worked as a personal chef and line cook before opening her truck.

Flo has worked in food service on and off since she was 14. She worked her way through college as a hostess and server in Philadelphia at restaurants such as Opus 251, Continental, Jamaican Jerk Hut and Frog Commissary.

“Robin worked in the legal industry for many years and then enrolled in culinary school while continuing to work,” said Flo, “but the whole time it was more about saving money to start a food biz. We became friends and always talked about food and starting some business in food. Robin was set on waffles, and so it began.”

The duo, who currently have one truck, started with a Kickstarter party in Kensington/Fishtown, but their first service was breakfast at The Porch at 30th Street Station. (The online campaign started on Feb. 17, 2014, and ended on April 7, 2014. It raised $12,898.)

Robin created the menu. After traveling in Europe and eating lots of waffles in Brussels and Amsterdam, she came home and could not find any waffles that she felt were as good.

“So it started with just the idea of sweet waffles,” said Flo, “but then Robin realized no one can live off sweets alone. So she wanted to take well-known sandwiches and pairings and put them on waffles. Then it just went from there. But mostly they’re on the menu because they’re things she likes to eat!”

Everything is made from scratch except for Nutella, peanut butter and sweetened condensed milk! The duo previously worked on the Lucky Old Souls burger truck in Chestnut Hill but then took over their current spot in late May, 2014. “We consider this our ‘flagship’ location and feel lucky to vend here in Chestnut Hill!” said Flo.

What is the biggest problem with having a food truck? “When the truck breaks down, you can’t work. The truck is your mobile restaurant. Most often you don’t know the truck won’t start until after you’ve prepared all the food for your service. So it’s pretty disheartening when it happens.”

Robin and one of her cooks usually spend one full eight-hour day per week prepping the food. Then they generally spend another 1.5 to two hours prepping things that need to be done for service before leaving in the truck for their destination.

“It’s hard to say how much time we spend driving in the truck,” said Flo, “since we have services and catered events all over. But a general rule is that it takes us almost twice as long in the truck than it might in a car.” 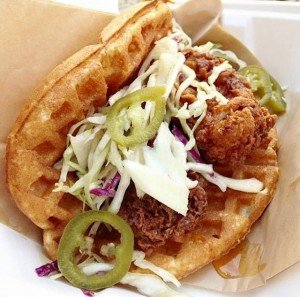 Fried chicken and waffles, as good as it gets. (Food photos courtesy of Foolish Waffles)

What was the hardest thing Robin and Flo ever had to do?

“Probably calling a client to cancel an event because our truck broke down. That sound of disappointment is the worst.”

What is the best advice they ever received? “I don’t know if it’s really advice, but I (Robin) go to work every day saying, ‘Expect the worst and hope for the best.’”

Which talent that they do not have would they most like to have? “We wish we had a mechanic on hand. Most of the problems we’ve encountered are mechanical issues with the truck. An on-call or on-the-truck mechanic would be awesome.”

What is their most treasured possession? “Waffle irons! Particularly, our Brussels and Liege waffle irons. They were imported from Amsterdam and run off gas. All others we found were electric-based, and we don’t have that much generator power to run all electric irons.”

What do the delicious duo like to do in their spare time? “EAT! On the truck and off the truck, we’re constantly thinking of what food we can snack on during our service and where we can eat afterwards. The waffle crew spends a lot of time together both on and off the truck, and most of it revolves around eating.”

What is their most impressive characteristic? “I think it’s generally how happy we are, and I think that shows in our food. People always comment on how much fun it looks like we have on the truck, and it’s true that we do!”