Katie and her band — Grant MacAvoy, Lenny Pierro and Madison Rast — at MorningStar Studio in Ambler during a recent recording session. They will be performing this Friday and Saturday night at … 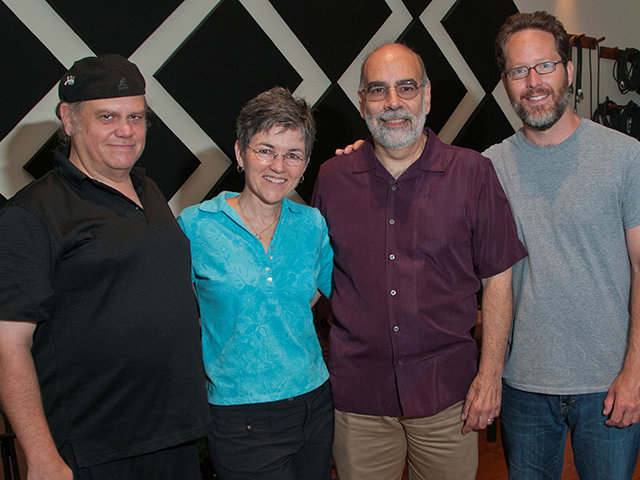 Katie and her band — Grant MacAvoy, Lenny Pierro and Madison Rast — at MorningStar Studio in Ambler during a recent recording session. They will be performing this Friday and Saturday night at Dino’s Backstage in Glenside. (Photo by Linda Johnson)[/caption]

When I asked Katie Eagleson, a terrific singer from Flourtown who will beperforming at Dino’s Backstage in Glenside on Aug. 18 and19 with her band — Lenny Pierro, Madison Rast and Grant MacAvoy — what was her greatest achievement in life, I expected the answer to be about her musical accomplishments.

I was so wrong. Her answer was a lot more poignant and compelling than any anecdotes about a musical career.

“If you ask me a year from now, I might give you a different answer,” she replied, “but right now I feel like my greatest achievement has been to take care of my mother for the last several years of her life. She has lived with my husband and me for the past 20 years. She just died three weeks ago at the age of 100. She was homebound with Parkinson’s and dementia for the last three years and needed someone with her 24 hours a day.

“It wasn’t always me. I have a big family of helpers, and we had an agency caregiver as well, but I organized it. As any caregiver knows, it can be very difficult and very rewarding at the same time. If you measure greatness by how much you positively affect someone’s life, then it was my greatest achievement. In any event, it was my most challenging achievement.”

Another compelling and surprising answer came when I asked Katie which person in the world she would most like to meet and spend an hour with? “I suspect this isn’t the type of answer you’re looking for,” she said, “but I’ve often thought I would like to spend an hour with my dad, who died when I was 24 and he was 63, almost 40 years ago. I just had my 64th birthday, so I’d like to compare notes, since at this point I’ve been on earth as long as he was on earth. I’d like to know what he would have thought of how his family turned out and what words of wisdom he might have as an old man.”

An Oreland native, Katie has lived in Flourtown with her husband, Lenny Pierro, who is in her band, for the last 20 years. She has been singing in the Philadelphia area for over 30 years. Her varied performance experiences have led to a diverse repertoire, but it is in her interpretation of the Great American Songbook where she truly shines.

Fellow musicians, as well as listeners, often comment on her great pitch, diction and ability to swing. At the same time, her voice has often been described as "soulful." Performing songs by the Gershwins, Cole Porter, Stephen Sondheim, the Bergmans, etc., she delivers the lyrics, whether sad, romantic or funny, with great sincerity.

Although Katie studied music and voice at two colleges and privately, her real training began in the family station wagon. "My earliest memory is riding in the car with my mom, singing along with the radio, to a Patti Page song called 'Let Me Go, Lover,' except I was singing 'Ging Ging Go, Gover' because I was two," recalled Katie in an earlier interview. "My mother taught me and my sisters a lot of songs that we could sing in harmony."

Katie, the youngest of seven children, has no children herself, although she does have 18 nieces and nephews and 19 great-nieces and nephews. She graduated from Ravenhill Academy in Germantown and then attended several colleges.

"I just took courses wherever I was living," she said. "France, Miami, Colorado Springs, and then locally I went to Montco, University of Penna. School of Nursing, Neupauer Conservatory of Music and Temple. I majored in nursing, anthropology and music, of course not all at the same time and not to completion. I guess you could say I've had many interests, although singing has been a lifelong one."

Katie and her band have produced three CDs — “Once Upon a Time” and “On the Other Hand,” which included 16 songs from the Great American Songbook, each one by a different composer, and “In My Fashion,” which was structured like one of their live shows. And they are about to release their fourth CD, a Christmas album, this fall.

Over the last year or two, Katie and her band have performed at Paris Bistro twice, done two concerts at Act II Playhouse in Ambler, put on a self-promoted show from time to time at Jacobs Music in Willow Grove and performed at retirement communities here and in Florida. Katie also teaches singing at DeLuca Music in Hatboro and at her home.

Katie’s performances will begin at 8:30 p.m. on Friday and Saturday. More information: www.dinosbackstage.com or katieeagleson.com. Sally Cohen also contributed to this article.