Flourtown resident Mark Pricskett, 47, has always had a love for film. As a child, he remembers watching the 1933 film, “King Kong,” and being grabbed by the suspense. Even though he knew at some point a giant ape would appear on screen, he was more interested in the story leading up to it. “I like stories to be more intimate, more focused on what’s happening internally than externally,” he explained. 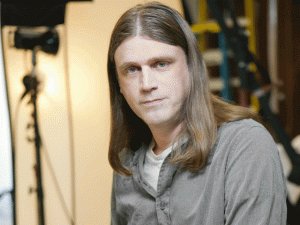 Pricskett has had acting roles in seven feature films from 1998 to 2011, including “Unbreakable,” “Snake Eyes” and “The Greek American.” After graduation from Lincoln High in Northeast Philly, he attended the Art Institute of Philadelphia to study photography and turned that into a successful career. He  worked at Strawbridge & Clothier as their senior staff photographer for 11 years and then moved on to his current 15-year job at a publishing company. (In 2011, Mark won the National Gold Ozzie Award for a cover for Stitches, a fashion magazine; the Ozzie is the highest award given to commercial magazine photographers.) But he always had a dream of becoming a filmmaker.

“That’s my passion,” he insisted. “That’s the direction my career has gone in. That’s where I’m putting my focus. I’ve been using my experience as a photographer to write and direct these short films.”

both look at life through the perspective of a child. “Kevin’s Friend” is about a boy who walks home through a park every day until one afternoon he meets a girl and they become friends, though something is different about her. “Finding Father” is about a father and daughter who lose their wife/mother and their subsequent journey through the grief.

(According  to the Internet Movie Database, only six out of 1.7 million films from the 124 years of the film industry’s history portray a child living with a widower father and present it from the child’s perspective, as does “Finding Father.” “There are many adult challenges that children are sometimes faced with,” said the local writer/director, “and this film deals with some of those challenges.”)

When he started working on “Finding Father,” the Flourtown filmmaker wanted to focus on a child coping with adolescence through her art. But as he was writing it, a friend’s wife passed away from cancer and left four daughters behind. The grief he saw the family going through began to influence his writing, and it became a story about how a child’s artistic voice can help heal families.

He mentioned the direction the story was taking to other friends and discovered that several of his friends had also lost their mothers to cancer when they were young. That’s when the story began to take on real significance for him.

He realized this film could have the ability to touch a great many people, so he began researching what the loss of a parent and spouse does to a family. The story in “Finding Father” is fictitious, but it is based on several true stories and in-person interviews with individuals who have gone through similar grieving experiences.

Pricskett also read books on grieving and consulted extensively with Dr. Maureen Davey, of Drexel University, who specializes in research into the effects of mental and physical disorders such as depression related to coping with a mother’s premature death due to breast cancer.

While these are powerful, compelling issues, Pricskett had to walk a fine line between making a movie that was reality- and emotionally-driven and also finding a way to entertain an audience.

“When you watch a film, you’re expecting to be entertained,” he said, “no matter what the subject is. That’s my challenge as a filmmaker, not only to tell this heavy story but also to entertain the audience. This film doesn’t hit you in the face; I believe its messages are very subtle. These are heavy issues, but it’s told in an almost fairy tale-type of story.”

And as a filmmaker, Pricskett also has to navigate all the real-world details of making a movie. From when he started to today, he has put in two years time, working on the short film every single day. Apart from researching and writing the script, he had to cast the film and arrange for shooting permits, labor permits, trailers and equipment. And even though the filming has been completed, his work is far from finished.

Mark is currently working on editing the film; then it will be sent to a composer for the music, and then into post-production. There are also promotional materials to be designed and distributed, and then the film will be entered into film festivals.

Having a distributor pick up Pricskett’s film is important for two reasons. It helps get his work out to audiences, but it also helps pay the bills. This passion for filmmaking isn’t cheap. Averaged out, this film cost him about $1,000 a minute to make. (“Finding Father” is approximately 12 minutes long.)

Music for the film will be created by two-time Emmy Award-winning composer Michael Whalen. Bart Shatto, who plays the father, starred in the original Broadway casts of Tony-nominated “The Civil War” and “Dracula,” and he played the iconic role of Jean Valjean in both the national tour and Broadway cast of “Les Miserables.”

Pricskett funded the film mainly through loans and credit cards. That’s why he partnered with Indiegogo, a website where projects such as “Finding Father” can be crowd-funded. The site allows any donations to be tax-deductible.

“I don’t think people have any idea how much can go into a short film,” he explained. “One thing people don’t understand with filmmaking — and I’ve been on big-budget sets and smaller productions — is that every film is a miracle. It doesn’t make any difference what the budget is. You’re dealing with people and politics and red tape.”

All the hard work, expense and time have not deterred Pricskett. He hopes to have “Finding Father” available for the public by spring of 2013, and then he’ll start thinking about his next film. “I don’t have a choice. I felt like I was born a filmmaker. I’ve worked my entire life to get to this point. This is how I’m wired. I feel like I am a good storyteller and that audiences would be interested in the stories I want to tell.”

The Flourtown resident has no children, but he has a female companion who is a mixed media artist as well as a professional musician (bass guitar, vocals, and cello).

For more information on Pricskett, his films and the funding of “Finding Father,” visit http://www.markpricskett.com.