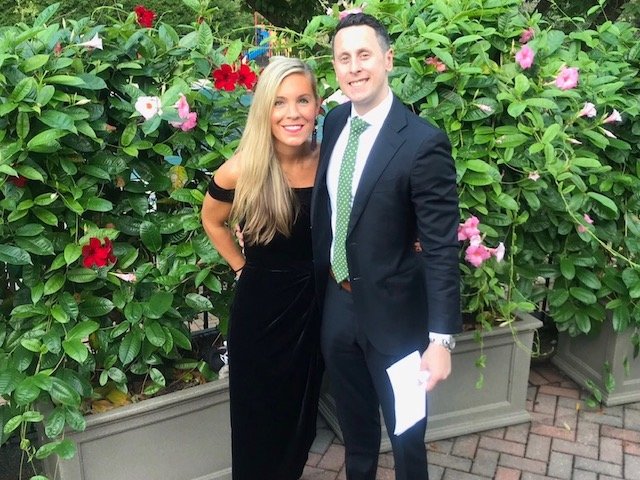 Caitlin Brown and Zachary Perch, who will celebrate their wedding ceremony and reception at Chestnut Hill College on Sept. 21 this year . discovered while dating that not only did their paternal grandmothers both attend CHC, but they graduated together in the same class 75 years ago.

When Caitlin Brown and Zachary Perch started dating, they discovered an interesting and surprising coincidence. Not only did their paternal grandmothers both attend Chestnut Hill College, but they graduated together in the same class 75 years ago. Their names were Mary Agnes O’Neill and Shirley Blumenthal. The graduation ceremony took place on a historic day – June 6, 1944 (“D-Day”), the turning point of World War II.

After graduating with Bachelors of Arts degrees, these beautiful, smart young women would go their separate ways to land jobs, get married, raise children, as well as return to their careers, volunteer, and leave legacies as strong, loving matriarchs and role models to their respective families.

Zach’s family has strong ties to Chestnut Hill. Born in 1923, Shirley, his paternal grandmother, grew up at the corner of Ardleigh Street and Highland Avenue. Her home was located one block from Germantown Avenue where her father, Samuel Blumenthal, and his partner owned and operated the Chestnut Hill Market from 1917 through 1955. During that time, the store was remodeled and expanded. This local business was known for providing the freshest products, as well as outstanding customer service. Sam was one of the original members of the Chestnut Hill Businessmen’s Association. The store later became the Dorothy R. Bullitt Dress Shop for many years.

Shirley graduated from the John Story Jenks School and Germantown High School in 1940. She received an academic scholarship to CHC. After college, she worked as a social worker with the Red Cross. She married Gilbert Perch on Oct. 26, 1947, at the Germantown Jewish Center, and they raised five children in the Elkins Park/Melrose Park area. Shirley was a stay-at-home mother when her children were young. She served as a PTA officer, Girl Scout leader, Cub Scout den mother, and volunteered with the League of Women Voters. In 1968 she returned to work, which expanded to a 20-year career with the Philadelphia Department of Social Services. In 1978, Shirley and Gilbert returned to Chestnut Hill to live with and care for her mother, Pauline. The same house on Ardleigh Street would become their home for the next 15 years. 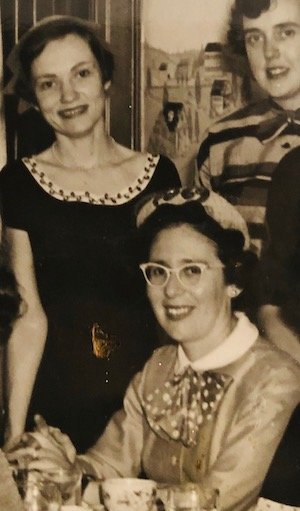 During part of that time, Zach and his family lived close by on Winston Road. His family was very involved and supportive of community groups and events. After retirement, Shirley volunteered as a docent at a museum in center city and at Chestnut Hill Hospital. She was the beloved grandmother of 11.

Mary Agnes, Caitlin’s paternal grandmother, was born in 1923 in Brooklyn, New York. Her mother had worked as a nurse in Philadelphia and became acquainted with the Sisters of St. Joseph. She believed that CHC would be a good choice for her daughter. After graduation, Mary Agnes moved to New York City, where due to the war, there were more job opportunities for women. She worked as an insurance investigator, a subscription associate at Time Magazine, and a legal assistant.

Mary Agnes met her husband, Robert Brown, through her CHC roommate, Genevieve Reedy, who married a man from her hometown of Scranton. Mary Agnes attended a Fourth of July party in Scranton where she became acquainted with Robert, who was Genevieve’s husband’s first cousin. They married on Dec, 27, 1951, in Brooklyn and held their reception at the New York Athletic Club. The couple settled in Scranton and raised a family of nine children.

Mary Agnes earned a Master’s Degree in counseling from Marywood College in Scranton in 1972 and worked as a school guidance counselor for 12 years. She served two terms as a member of the Scranton School Board and was involved in many volunteer activities, including Meals on Wheels, the Lackawanna County Bureau of Children’s Services, and the Volunteer Action Center. In 2010, she was awarded the Gov. Robert P. Casey Medal for a Lifetime of Service. She was the loving grandmother of 27.

Both Shirley and Mary Agnes maintained fond feelings for CHC and strong connections to the Chestnut Hill area. They attended reunions whenever possible to continue friendships, visit with the Sisters of St. Joseph and enjoy the beautiful campus. The comparison is clear; Shirley and Mary Agnes had much in common. They held similar beliefs supporting higher education, love of family and friends, pursuing successful careers and dedication to volunteering. CHC alumni are well known for their commitment to volunteerism.

Shirley passed away in 2012 and Mary Agnes in 2016. Caitlin and Zach decided to honor the memory of their special grandmothers by celebrating their wedding ceremony and reception at Chestnut Hill College on Sept. 21 this year.

Caitlin is a certified registered nurse practitioner in the department of surgical oncology specializing in gastrointestinal cancers. She recently graduated with her Doctor of Nursing Practice. Zach is an investment consultant (CPF) for Clark Capital. After a honeymoon in Greece, the couple will reside in Northern Liberties.

Lois Perch Villemaire, of Annapolis, MD, who wrote this article, is Zachary’s aunt. (“His dad is my brother, and Shirley was my mother.”) She grew up in Elkins Park and Melrose Park. “I spent a lot of time in Chestnut Hill over the years visiting my grandparents when I was growing up,” she told us. “The area continued being an important family location when my parents moved into my mom’s childhood home, and Zach’s family lived nearby.”