Malik Abdul Khaaliq (left) Harrison Rothbaum star in “Lobby Hero” by Kenneth Lonergan at the Stagecrafters. It is the story of Jeff, a young, good-natured guy who lands a job as a security guard … 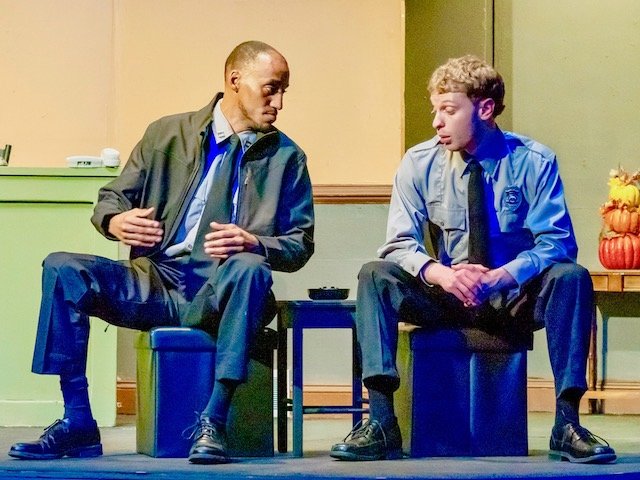 Malik Abdul Khaaliq (left) Harrison Rothbaum star in “Lobby Hero” by Kenneth Lonergan at the Stagecrafters. It is the story of Jeff, a young, good-natured guy who lands a job as a security guard in a Manhattan apartment building. His hope of finding some stability in his life is upended by his unexpected involvement with his new boss and two police officers, all of whom are involved in a murder investigation. Tickets start at $21. Discounts are available for seniors, students and industry. For reservations, call 215-247 8881. For more information, visit TheStagecrafters.org (Photo by Joanne Davis)[/caption]

We the people of Philadelphia have been graced again with another amazing theater scene. We have the likes of the Walnut, The Wilma, Philadelphia Theatre Company and The Arden. We have shows that play at the Kimmel Center, The Merriam, the Forrest and the renewed Metropolitan. But alas, what of theater in and around the northwest part of the sixth largest city in the U.S. We are blessed with so many venues to see fine theater without trekking into Center City. Within seven miles of the Chestnut Hill Local office on Germantown Avenue, there is a plethora of theater to be seen.

This season, the works of Shakespeare, Neil Simon, Henrik Ibsen, Agatha Christie, Jane Martin, Bruce Graham, Theresa Rebeck and J.M. Synge can be seen without traveling far. Plays from “Hedda Gabler” to “The Wizard of Oz,” from “The Philadelphia Story” to Crimes of the Heart,” from “Greater Tuna” to “Purlie Victorious” are in the local theaters.

The theaters listed below all have outstanding lineups, 30 plays in all, worth looking into. Besides the three on or near Germantown Avenue, there are Old Academy Players in East Falls and Act II Playhouse in Ambler. And finally, Arcadia University in Glenside will stage five plays this season.

Stagecrafters is at 8130 Germantown Ave. in Chestnut Hill. Their season begins with “Lobby Hero,” a play about a young security guard. It is set in the lobby of a Manhattan apartment building in the middle of the night. It revolves more around the four characters than the plot. Revived in New York last year, it received many award nominations, including one for Michael Cera.

“The Insanity of Mary Girard” opens the Allens Lane season. Mary Girard was the wife of Stephen Girard, after whom Girard Avenue and Girard College were named. It seems that Mary got pregnant by her lover in the 1790s, and her hubby promptly had her admitted to a mental institution, where she spent the last 25 years of her life. The play explores the first night in the insanity ward of Pennsylvania Hospital.

Quintessence opens its season with “Playboy of the Western World,” the Irish classic of the early 1900s by J.M. Synge. It’s about a young runaway man who claims he killed his father and the reaction of the town.

Act II is running “Greater Tuna,” a comedy about the fictional town of “Tuna, Texas.” One of four plays in the Tuna series, it is laced with satire about southern life. It was so successful when it opened in 1981 that a few years later, Norman Lear produced the series on television.

Old Academy Players, founded in 1923 and the theater where Grace Kelly got her start, is still producing season after season of plays. They open with “Purlie Victorious,” a play by Ossie Davis. Turned into a musical later, this production is the original play about a traveling minister who returns to his small Georgia home town during the Jim Crow era, as he tries to rescue the old church and help the cotton pickers who have worked for the ruthless plantation owner. The original cast included Davis, Ruby Dee, Godfrey Cambridge and Alan Alda.

There are many other reasons that make it most pleasurable to attend local theater. An obvious one is price. Another is convenience. These theaters are close, and usually there is parking on the grounds or nearby. But what I love most about these theaters is the size of the houses. They are all small theaters that seat less than 100 people. This means that every seat is a good one, with every dramatic moment just a few feet away.

So whether it’s serious drama or broad satire, musicals or classic plays, mysteries or historical epics, you can see it all not much more than a stone’s throw from Germantown Avenue.

Every theater has a website where you can see their season and consider ordering season subscriptions for even better value.