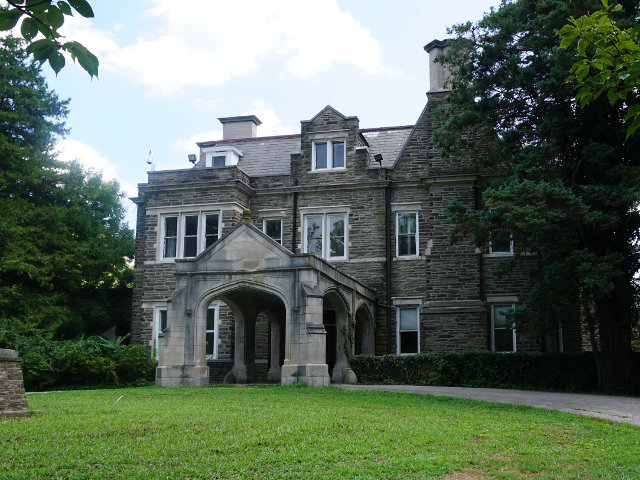 After years of abandonment, Chestnut Hill’s historic Greylock Mansion, at 208 W. Chestnut Hill Ave., is going up for sheriff’s sale on Sept. 13 for $98,000. The mansion’s owner, Greylock Holdings LLC, has defaulted on the mortgage and is delinquent on three years of taxes, totaling nearly $90,000 as of 2016.

After being vacant and vandalized for nearly a decade, Greylock has an opportunity to be saved from falling into disrepair. There’s just one small catch for some potential buyers: As a historical property, Greylock has conservation easements protecting it from most development.

There are two main easements on the property. The first protects the grounds of the mansion, preventing any development of the green space and controlling water runoff into the Wissahickon Watershed. The second easement protects the façade of the mansion and the carriage house, citing them as significant buildings in Chestnut Hill’s Historic Register.

“Those easements are written in blood, in my opinion,” said Brad Bank, a resident of West Chestnut Hill Avenue and a member of the Chestnut Hill Historical Society. “CHHS and the Friends of the Wissahickon have a responsibility to vigorously defend the easements.”

Wyndmoor resident Jack Bellis was originally interested in buying the property at the sheriff’s sale, but the easements were a deterrent for him.

“I believe the easements make it so unappealing that it might not sell at all or it might crumble to dust before people buy it,” Bellis said.

Bellis explained that he wanted to buy the mansion with a few of his friends as partners to split the cost of the restoration, utilities and $36,000 a year in taxes. His plan was to turn the inside of the mansion into as many as nine condominiums. With the easements and the expensive upkeep, however, Bellis said he and his partners may not be able to buy Greylock.

Though the easements allow for up to 12 units to be built in the mansion and carriage house, the site only has 11 possible parking spaces, and the conservation easements protect against adding any more impervious blacktops—a stipulation the neighbors of the mansion are particularly keen on seeing upheld.

For many of the easement stipulations, the phrase is “with CHHS approval.” In other words, a developer or future owner can propose a number of changes to the property that would comply with some of the easements, but the CHHS still holds the power to veto their proposal.

Bank explained that CHHS often allows developers to propose amendments to easements on properties around Chestnut Hill, but they rarely agree to them. Their attitude of “anything is possible” can be misleading to developers and homeowners. Bank said he wants CHHS to be tougher with people upfront and say that they will only hear proposals that abide by the easements.

“Our policy on amending conservation easements only permits us to amend the easements if it enhances the conservation value,” said CHHS’s Board Vice-President of easements Karren DeSeve.

CHHS Executive Director Lori Salganicoff added, “It is unusual for us to amend an easement, but we have done that in the past to accommodate appropriate change where conservation benefits. We are open to scenarios that would improve the conservation benefit and usefulness of the property.”

Salganicoff hopes to balance the views and interests of both potential developers and concerned preservationists.

“We need to be really clear as early as possible with what would be appropriate,” she said. “At the same time, we need to allow for creative thinking.”

Built by Pittsburgh Steel magnate Henry Laughlin in 1909, Greylock is situated on more than five acres of land. The three-story mansion was designed by William J. Carpenter and constructed with stone quarried on the property. Eventually, the property was sold to an order of nuns, and the mansion became a nursing home for more than 50 years.

Greylock was then bought by USABancShares (also known as Nova Bank) to be used as a corporate headquarters. The company negotiated with the Chestnut Hill Historical Society (CHHS) to use it for non-residential purposes (specifically corporate offices) as long as conservation easements were in place to protect the façade and integrity of the mansion grounds. The easements also gave BancShares a monumental tax break.

In 2006, due to stock market losses at BancShares, the property was transferred to an investor and lawyer for BancShares, Thomas Maiorino under the name of Greylock Holdings LLC. Greylock has since defaulted on the mortgage and is delinquent on three years of taxes, forcing the mansion to go to sheriff’s sale after being on the market for two years.

The mansion currently is owned by the FDIC as part of TARP, which allows the government to purchase toxic assets from financial institutions to protect investments and financial stability.

This spring, BancShares’ CEO and chairman were found guilty of defrauding the TARP program of $13.5 million. Through a series of circular transactions with a third party, the two made it seem like the bank had the $15 million in investment funding to qualify for TARP. The FDIC estimates that the bank’s failure has cost it $91.2 million, according to the Philadelphia Business Journal.

In most cases, properties that go up for sheriff’s sale due to mortgage foreclosure are bought back by the bank. Bellis, however, said he’s not sure that the FDIC will want this mansion either.

Since 2006, the property has been mostly vacant and vandalized. Plumbing and electrical wires have been torn up and taken, so the building will need renovation to restore those utilities. Due to lack of upkeep, the roof leaks and ivy has grown into the mortar of the house. 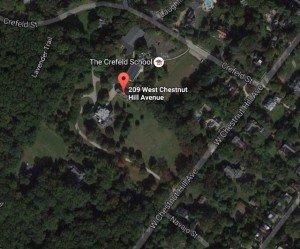 Greylock Mansion on the map. The red pin is on the home’s carriage house. The mansion is below.[/caption]

In buying Greylock, the FDIC would be taking on a full restoration of the house, costing hundreds of thousands of dollars, and then it would face putting the property up for sale again after two unsuccessful years on the market.

With living space tight in Chestnut Hill, Greylock would be a prime location for developers to create more housing. Bank is concerned that interested buyers won’t read the easements or take them seriously.

In 2011, Green Wood Charter attempted to buy the property as a new location for the school. The CHHS unanimously denied proposals to amend some of the easements to accommodate the school’s use of the property.

Many of Greylock’s neighbors fought against Green Wood’s proposal because it would go against the traffic zoning that prevents more than 75 visitors on the property a day. Neighbors were concerned about the increased foot-traffic that a school would create in a residential neighborhood.

Bank said he hoped that the sheriff’s sale will be different. He hopes this time that only people who wish to preserve the easements will buy the house.

“As someone who restores houses, I would love to see somebody restore it,” Bank said.

Bellis, on the other hand, said the easements are holding the property back from being preserved. He is worried that Greylock will be demolished just like Whitemarsh Hall, an opulent Chestnut Hill mansion built by Edward Stotesbury and worth upwards of $12 million. Whitemarsh was demolished in 1980 because of its exorbitant upkeep and lack of solid ownership. All that remains of this grand six-story house are some columns and sculptures.

Though Bellis noted that the easements are well-intentioned, the combination of the interests of the tax-burdened BancShares and Greylock Holdings, the CHHS and the mansion’s neighbors’ traffic zoning requests have led to a situation where the property may fall into disrepair.

Bank admits that he is also worried about the fate of the Mansion. “It’s hard to sell a property that can’t be developed,” he said.

Salganicoff explained that CHHS doesn’t want to lead anyone down the wrong path when it comes to amending the easements, but they want to encourage creativity in finding a way to preserve the site and make it useful. “We want to be realistic and engaged with this, but our job is to defend and protect the site,” she said.