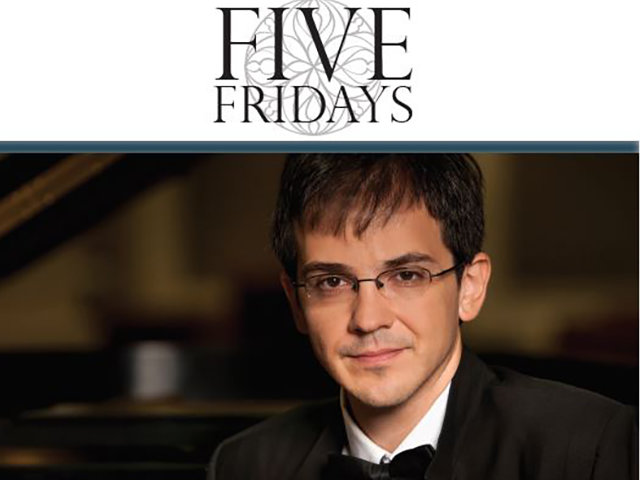 Secondly, the recitals usually feature a talented newcomer presented by the locally based Astral Artists. Third, this particular installment of “Five Fridays” was also sponsored by Cunningham Piano Co., now of both King of Prussia and Germantown, to showcase the new CFX concert grand piano made by the Japanese maker, Yamaha. And finally, the recital drew a crowd of more than 100 – the largest ever.

Valkov’s program would have been noteworthy in and of itself. He opened with one of the most famous yet rarely played works in the repertoire: Ludwig van Beethoven’s “Sonata No. 29 in B-flat major,” Opus 106, “Hammerklavier.” Lasting a solid 50 minutes, it’s the second of the last five sonatas Beethoven composed. All five (the others being Opuses 101, 109, 110 & 111) comprise Beethoven’s final statements in the solo instrumental sonata form and speak in a language of heightened spirituality usually attributed to his having accepted his total deafness.

In particular, the “Hammerklavier” (the German name for the Italian-styled “pianoforte”) extends the sonata-allegro structure of the first movement, the demonic quality of the Scherzo, the length of the Adagio sostenuto and the fugal counterpoint of the closing movement beyond the point of any other composer’s capabilities. And yet, Beethoven’s peerless inspiration suspends disbelief and sustains the music from start to finish without a crack in the structure.

Valkov played the work with an overwhelming mastery over the multitude of tones he elicited from the Yamaha, a burning intensity of interpretation that invested every note with highly charged meaning in which not one was wasted, and a general’s command over the expanded yet focused form of the sonata’s four movements. His rendition was both exhausting and electrifying.

Valkov was equally successful in Frederic Chopin’s “Polonaise Fantasy,” in which the 19th century Polish composer seems to have fantasized out of his own imagination the very notion of Polish music. Valkov voiced and colored the music by highlighting its hypnotic melodies over its pungent harmonies. He caught the quirkiness of Chopin’s “Mazurka” in B-minor, Opus 33, no. 4, and Franz Liszt’s “Valse Impromptu.” He also drew an ovation for his playing of Liszt’s wrongly titled “Hungarian Rhapsody No. 9.” It’s actually Gypsy music at its foundation, and it always reminds me of Shakespeare’s remark about life in “Macbeth”: “full of sound and fury, signifying nothing.”

And the Yamaha? Booming bass register, resonant middle and rather shrill top.

Donizetti (1797-1848) and Vincenzo Bellini (1801-35) joined Gioachino Rossini (1792-1868) as the masters of the Italian “bel canto” (beautiful singing) style of operatic writing at the dawn of the romantic era. Taking Mozart’s later Italian operas, such as “Don Giovanni” and “Le nozze di Figaro,” as models, they left behind the static style of storytelling of baroque opera and moved toward the more dramatic approach of the grand opera of Giuseppe Verdi (1819-1901). Yet they never abandoned the supremacy of the voice. Both Donizetti and Bellini employed the orchestra for telling narrative and emotional effects even while spinning out their most sublime vocal lines.

“Lucia,” with a libretto by Salvadore Cammarano based on Sir Walter Scott’s “The Bride of Lammermoor,” is Donizetti’s acknowledged masterpiece. When heard and seen in a production as consistent and convincing as that now being offered by AVA, it’s obvious that the work is one of the greatest masterpieces of the entire operatic repertoire.

Originally set in 17th century Scotland, AVA’s team has moved the action to the more familiar 19th century without any damage being done to the potency of this tale of misguided political and financial ambition and thwarted love. Even in the far more progressive 19th century, women were still almost entirely powerless when it came to choosing a husband, all the more so if they were part of an aristocratic family with all its history of blood feuds between clans and ruin at the change of dynastic fortunes.

The Ashtons, Lucia’s family, are mortal enemies of the Ravenswoods, the clan of her beloved Edgardo. Lucia’s brother, Lord Enrico, needs her to marry Lord Arturo Bucklaw to avoid financial and political disaster. Unfortunately for Lucia, Arturo is not merely the man she doesn’t love but a dyed-in-the-wool thug. Edgardo, on the other hand, is your far-better-than-average dashing, dream-come-true lover, albeit a rather hotheaded one. In the fashion typical of opera librettos in which Italian first names are placed on top of non-Italian family names, the future doesn’t bode well for anyone and everyone concerned.

What did and does bode well is AVA’s history of making magic from such a libretto and the score that sets it to music. Macatsoris, the school’s music director, elicited stunning singing from his young cast and equally impressive playing from the AVA Opera Orchestra Saturday evening. The intimate Warden Theater came alive with vibrant instrumental colors and vital vocalism that not so much pointed the way to the visceral emotions of post-Verdi “verismo” later in the century but embraced its “go for the jugular” style without sacrificing that beauty of tone that defines “bel canto.”

Soprano Meryl Dominguez essayed the title role with an intense feel for the role’s foreboding of doom and a memorable command over the coloratura demands of the vocal writing. Although there were a few off moments in her “Mad Scene,” she delivered the fireworks with ringing bravura. Tenor Mackenzie Gotcher threw himself into the role of Edgardo with such a high degree of abandon that he nearly ran out of steam vocally at the end. Still, his portrayal was one of towering tragedy projected through a virile voice that could probably handle Manrico in Verdi’s “Il Trovatore” within a year or two.

Although baritone Jared Bybee indulged in a few too many gestures left over from silent film villains in the role of Enrico, he nonetheless sang with menacing authority. Tenor Abraham Breton was a fine-voiced yet unctuous Normanno, Enrico’s henchman. Tenor Roy Hage was as mean-spirited an Arturo as I’ve ever encountered in the opera, yet his voice rang with clarion brilliance. And bass Daniel Noyala was sympathetic as Raimondo, the Ashtons’ chaplain who tries his best to right a series of terrible wrongs.

Nic Muni’s stage direction was straightforward, Peter Harrison’s set was sufficiently flexible for the opera’s many changes of venue, Allen Doak’s lighting was appropriately threatening, and Val Starr’s costumes efficaciously projected the personalities of every character.

Virtual performance at St. Paul’s promising for return of live music this fall

Orchestra makes most of pandemic limitations for virtual concerts