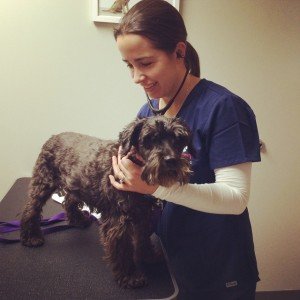 At the recently opened Liberty Veterinary Clinic, near Bells Mill Road and Ridge Avenue in upper Roxborough, your cats and dogs will receive the finest care from a veterinarian who became one because life as a neuroscience Ph.D student, doing research in the lab at the University of Pennsylvania, was simply too monotonous.

“I realized I didn't want to do just research,” said Dr. Caroline Patten during an interview last week.

“What I wanted to do with this clinic is create a really good family atmosphere,” said Patten, 37, “where you feel like you're part of the family when you come in.”

The new location provides Patten the opportunity to run the clinic the way she thinks best, allowing her to take elements of clinics and hospitals where she's worked in the past and apply the best of them to her own office. According to Patten, growth has been great so far and has occurred through word-of-mouth.

“When you do it from scratch,” she said, “I can do everything the way I want.”

A mother of two boys, one seven, the other 22 months, Patten, who lives in East Falls, realized, “There really isn't a convenient time to open your own clinic.”

She had been commuting, sometimes over an hour, to her three different jobs, including one in the Northeast and two over the bridge in Jersey. “Eventually I just got tired of postponing it.”

The new clinic has cut down on her driving time too. Patten says that Liberty is a family place, meaning that she and her staff take the time to get to know patients and their human owners, too. It means recalling where you work or that your hobby is running through the Wissahickon. It also means that “when you call, and your pet's sick, we'll fit you in,” Patten assured.

While a Ph.D student in the lab, conducting molecular based research on how cells regulate food intake and how certain foods might become addictive, Patten found it repetitive. There was little human interaction. She started volunteering in the emergency room at U of P's veterinary hospital.

That's where her love of animals — which inspired her to lobby her parents for months as a child until she got her first terrier mix — resurfaced like a guide, leading her life in a new direction. She enrolled in a combined program, allowing her to earn her veterinary medical degree alongside her Ph.D. She finished vet school in 2009.

Raised in Washington D.C., Patten first came to the tri-state area to study at Princeton University. She married Bret Asbury, now a law professor at Drexel University, in 2005. Patten hopes the customer service at Liberty will set her clinic apart from other veterinarians.

On March 21, Liberty will hold an open house including prizes, food and freebies for your pets. There will also be dogs and pets up for adoption. Representatives from PMAR and the Roxborough Dog Park will be on hand, as will author and Pro Football Hall of Fame Broadcaster Ray Didinger, from NFL Films and WIP.

Working with animals and being an integral part of a community “just gives you a good feeling,” she said.