Longtime Chestnut Hill residents used to shop at the former A & P Market at 40 W. Evergreen Ave. that has been recycled into office space owned by Blue Hill Partners. (Photo courtesy of the … 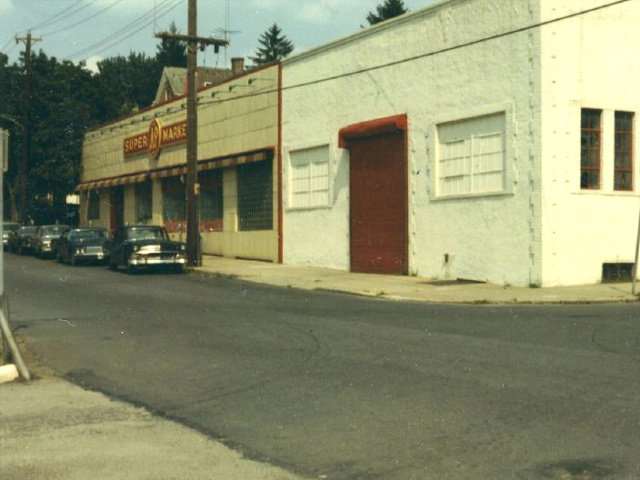 Longtime Chestnut Hill residents used to shop at the former A & P Market at 40 W. Evergreen Ave. that has been recycled into office space owned by Blue Hill Partners. (Photo courtesy of the Chestnut Hill Historical Society)[/caption]

Once a bustling A & P Market across from the Chestnut Hill West train station, the brick building at 40 W. Evergreen Ave. has been recycled into a combination of traditional and shared office space occupied by many green businesses, thanks to the vision of a longtime Chestnut Hiller.

Joyce Ferris, who has lived on Gravers Lane for nearly 30 years, founded Blue Hill Partners in 2000 out of a desire to invest in energy-related and sustainable businesses.

In partnership with a London-based investment bank, she settled in to help fund and grow primarily green companies in office space in the brick building, known as 40 West, although it extends from 40 to 52 W. Evergreen, at the corner of Shawnee Street, directly across from the Chestnut Hill West train station.

When longtime commercial real estate investor Tom Tarantino sought to sell the building in 2007, Ferris and her partners, who had been tenants in the building, jumped at the opportunity to purchase the space and develop a niche community.

“I always loved living and working in Chestnut Hill, so I felt it was also a good investment strategy for us in terms of owning a building,” said Ferris, 56, while sitting at the granite-topped table in the glass-walled conference room bearing interesting artwork on the walls. “As a board member and investor in small and emerging businesses, I was very much aware of the challenges of meeting growing needs with the right amount of real estate. It’s hard to judge how fast a company is going to grow, and this space gives them the flexibility to expand.”

While leaning toward green in terms of occupancy and how the building is run, being in an environmental industry is not mandatory but does make up about 60 percent of the occupants. But it is also home to an allergist, dentist and an international insurance holding company headed by Drum Moir resident Perry Lerner.

While the firms primary offices are in New York City and London, Lerner, Chairman and CEO of Crown Global Management Company said he could work from home but settles into a sunny corner office at 40 W. Evergreen much of the time.

“I get so much work done here. I can burrow in without a lot of interruptions and it’s sophisticated enough to accommodate our business clients,” said Lerner. “For our employees in the New York office, they can easily get here by rail, and it really doesn’t take any longer for them to get here than to get to Center City.”

June Irwin, of Chestnut Hill Allergy and Asthma Associations, said some of their patients still remember shopping at the old A & P. “It’s hard to believe this was once a market. Some of the old timers tell me stories of walking here to shop. We love being here because it’s in a neighborhood, and it’s convenient to the train and the avenue,” said Irwin. 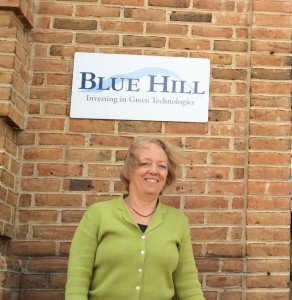 Joyce Ferris Managing Partner and Founder of Blue Hill Partners and a 30-year Chestnut Hill resident, is all smiles since the building is now fully occupied.

Karen Naughton of Roxborough, serves as the Business Manager in an administrative capacity for Blue Hill and the point person for the tenants. She formerly worked for Getz Printing in Flourtown and before that for her family-owned business, Williamson Restaurant in Bala Cynwyd, and in investment banking in Philadelphia and New York. Between jobs, she and her brother flipped houses, so she knows a thing or two about dealing with contractors and building maintenance.

“Joyce had the contractor use windows as walls in the offices to direct sunlight to come through, so even if you are in a cubicle in the center of the suite, you still get natural light,” she noted while showing off the Performance Systems Development space that takes up one of three shared services suites.

Naughton knows each of the 73 employees’ names and introduced the office dog to this observer. Kurt Raymond, of Mt Airy, brings Dulce, a rescued pit bull and Australian Kettle Dog mix, to work at Cicada Architecture/Planning.

“It was certainly a consideration and part of the attraction that they were open to having her with me,” said Raymond. “She sleeps under various desks and isn’t much of a barker. It’s good for us to have a bit of a diversion, and it’s good for her to be around people during the day instead of staying home alone.”

When Ellen Lutz of Clean Markets was looking for space to launch her company in 2009, Ferris, made Lutz a sweetheart deal. “She was a friend and colleague,” said Ferris, “who had just moved into Chestnut Hill, and I said, ‘Hey, come work here. I’ll give you some space rent-free for three months to help you get your business up and running. She is now up to 10 employees.”

On our tour, acupuncturist Sharon Sherman of Empirical Point Acupuncture caught Naughton in the hallway as she had gotten some mail that was meant for another tenant. “It’s a nice excuse to come out and see what others are up to,” said Sherman, who gave a mini-tour of her calming office, complete with three treatment tables and a steady steam of clients.

Susan Sargent, a healthcare management advisor, said, “I’m a one-woman show, so it’s nice to grab a cup of coffee and share pictures of my grandchild or just chat. There is a camaraderie here, and I enjoy coming in because I don’t feel like I’m alone all day.”

Mary Holland, one of the principal partners at Cicada Architecture/Planning has been in the building for nine years. “It’s a great mix of people who are all interested in sustainability. We have a lot in common, and Karen takes care of us,” said Holland while munching on leftovers from a social gathering the night before.

Felicia Doggett of Metropolitan Acoustics has been in the building for over a decade. “We re-up every time the lease is up. If we need more room, they make it happen. I live in Chestnut Hill, so it’s really nice to be able to be close to home from both a convenience and environmental standpoint.”

More information about the building at 40westchestnuthill.com. Visit www.bluehillpartners.com for more information about the firm that primarily specializes in funding green businesses. Flourtown resident Barbara Sherf wears many hats including writer, publicist, personal historian and speech coach. She can be reached at www.CommunicationsPro.com.