Enemies of Reading: Into the woods without a Kindle

Hugh Gilmore vacationing in Maine. by Hugh Gilmore The wind gusts are up to about 35 mph, the spindly spruce trees are bending halfway down to the lake, the lonesome-sounding loons are calling in …

Enemies of Reading: Into the woods without a Kindle 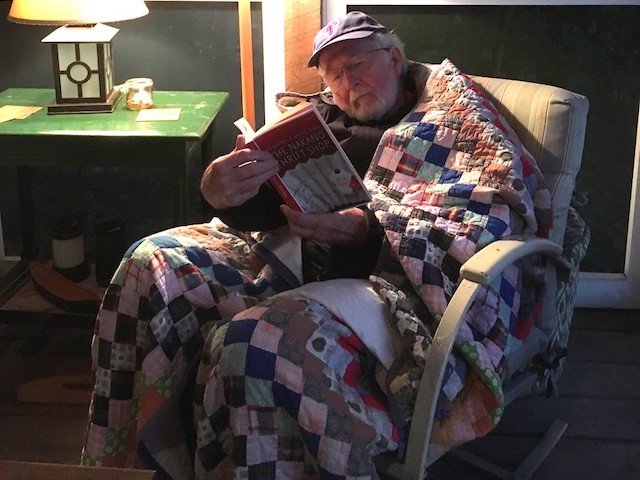 The wind gusts are up to about 35 mph, the spindly spruce trees are bending halfway down to the lake, the lonesome-sounding loons are calling in the tail of hurricane Dorian and it's nasty up here. The L.L. Bean temp gauge on the kitchen windowsill reads 59 inside and 48 outside. I'm outside, of course. That's where the screened-in porch requires me to be. I see no sense in driving 550 miles to get to my wife's cousin's cottage near Lincolnville, Maine, unless I do what I came here to do.

I don't water ski. I don't kayak. I don't swim in Maine lakes or ponds in September. I don't canoe. I don't sunbathe. I don't float in an inner tube. I wouldn't even know how to start the motorboat. What I do is read. Our annual Maine vacation is the only time all year I get to do two of my favorite things simultaneously: be outdoors at night and read. I'm on the porch in the dark as I write this.

I have on a T-shirt, a pullover, a sweatshirt, and my windbreaker. I'm also wrapped in a large crazy quilt. I'm sitting on a deck chair under two lamps and the temptation to fortify is constant, but I don't want to get pulled over by a moose for driving while reading. (Silly joke – the first sign of Arctic-induced madness.)

Since honesty seems to be the backbone of this back-to-school "What I did on my summer vacation" composition, I might add that there's a third crazy thing I came up here intending to do: buy books retail. I never include a book in my luggage when I come up here. This, despite the fact that I have dozens of unread books at home, carry a library card, own a used book business and own, like so many of you, a Kindle crammed with lots of good books.

My vacations are the only time of the year that I deliberately support the retail book publishing business. I don't use coupons. I don't ask for discounts. I don't seek "professional courtesies." I just decide, in my own noble way, to read something that makes me salivate while the aroma still freshens the air, even though the price usually is not right.

For one thing, the long wait for a library copy of a recently released best seller comes to seem interminable. "Oh yes," I'll say to friends, "I just read that book you folks were raving about back in 2013. Let's talk about it." For another, not buying the books you read is a bit like sneaking into the circus. You get to see the show, but the elephant gets peanuts. (Ta boom – arctic madness intensifies.) And the circus people starve.

As I said, noble intentions, but I can afford them only on vacation, the only time all year when I don't begrudge the price before buying what I want (modest wants allow me such cavalier moments).

For example, as soon as I could after we hit the town of Belfast, I steered my course for the absolutely wonderful, but retail, Left Bank Books on Church Street. I put my hands behind my back and scanned a lot of bookcases before I allowed myself to go to New Nonfiction. And then I saw "Barracoon: The Story of the Last Black Cargo" by Zora Neale Hurston. She is acclaimed as one of the shining lights of 20th-century American literature, but I have never read a book of hers. Vacation is a time for reading what I don't habitually read, so I eased her book from the shelf and took it to the register, to the tune of $24.99. Plus tax. Ouch. But it's my contribution to the booksellers and book publishers and those last-in-line people called authors.

The problem was, "Barracoon" was so good, I sat out on the cold porch last night till I finished it, leaving me with nothing to read for the coming days. Oh well, with six nights to go, I'm glad I brought my Kindle. Lots to read there, I thought. But as the day progressed and I thought of sitting outside as the temp dropped to a predicted 49 degrees, the thought of swiping my way through a Kindle grew repulsive. It's a clever device, all right, but it's plastic, and hard, and emits a cold unnatural glow. That is not the way to cozy up with a good read as the sun swoons into the night. At the end of our touring day I turned the car back toward Left Bank Books. I decided to buy the first Europa Books title I happened upon that I hadn't already read. And thus, for a mere $16.88 – less than two movie tickets – I have in my possession and will start reading, as I soon as I finish typing this paragraph, "The Nakano Thrift Shop" by Hiromi Kawakami. Never heard of it. Never heard of her.

How to handle being mistaken for Bernie Sanders

Henri Matisse, a dollar, a postcard, and a custody trail

Not so easy to end a 25-year seat-of-the-pants affair, Part 2

Nothing could get between us...until the affair was over. Part 1