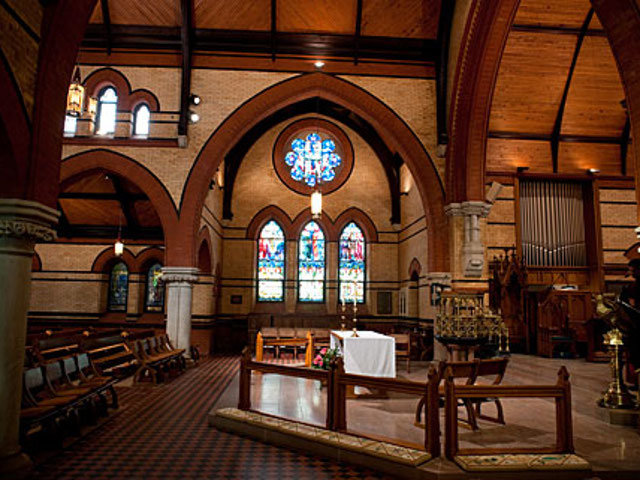 In preparation for Palm Sunday, the Episcopal Church of St. Martin-in-the-Fields held a Choral Evensong on Sunday, April 7.
by Michael Caruso The Episcopal Church of St. Martin-in-the-Fields, Chestnut Hill, marked the beginning of the fifth and penultimate week of Lent with a Choral Evensong Sunday, April 7. With scriptural readings and sacred choral music, the service was a preparation for the beginning of the Christian Holy Week on Palm Sunday, April 14. Parish music director Erik Meyer brought together a splendid series of choral works. The settings of the traditional texts of the “Magnificat” (My soul doth magnify the Lord) and the “Nunc Dimittis” (Lord, now lettest thou thy servant depart in peace) were by Herbert Howells, as was the setting of the Psalm 126: “When the Lord restored the fortunes of Zion.” Howells singled out the women of the choir to sing the opening sections of the text taken from the Gospel of St. Luke from the New Testament. He achieved a touching intimacy through delicate layers of counterpoint. Not until the text, “He hath showed strength with his arm,” did Howells bring in the male voices, offering fuller harmonies voiced in denser chords. It all leads up to the closing sequence on the “Glory be to the Father,” a stroke of emotional exaltation. Howells set out gentler territory for the text of the “Nunc Dimittis.” Although the men sing most of its early measures, they do so in a darker hue that is maintained even upon the entrance of the female voices. Meyer both conducted his choir and accompanied his singers at the organ with forthright sensitivity and expressive support. The choir sang both works with a full tone seamlessly blended with expert tuning and eloquent phrasing. The service’s major work, however, was Gerald Finzi’s broadly scaled “Lo, the full, final sacrifice,” composed in 1946. Finzi set the text, originally accompanied by organ but then orchestrated the following year in a variety of textures, both homophonic and contrapuntal. Meyer and his choristers gave it a reading that started softly, built to a thrilling climax and then receded into a compelling resolution. Meyer braced the Evensong with a sentiment-laden rendition of John Ireland’s “Elegiac Romance” at the start and an energetic interpretation of the Allegro movement from Felix Mendelssohn’s Sonata in F minor at the close. St. Martin’s Church will host a performance of Franz Joseph Haydn’s “The Seven Last Words of Christ on the Cross” Good Friday, April 19, at 7 p.m. The featured musicians will be the members of the Fairmount String Quartet, currently in residence at the Presbyterian Church of Chestnut Hill. 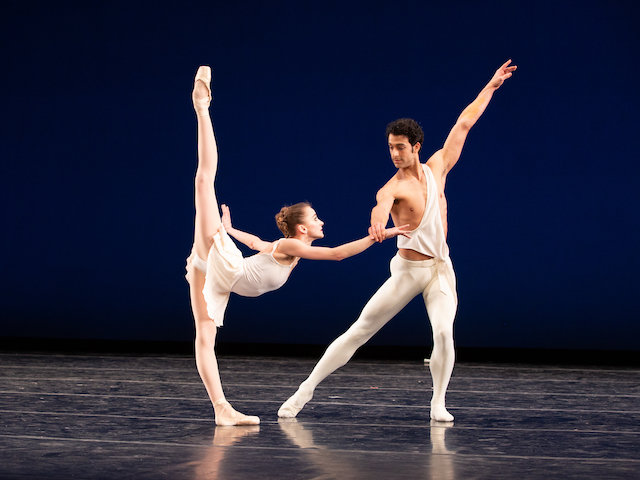 Pennsylvania Ballet principal dancers Oksana Maslova (left), of Roxborough, and Arian Molina Soca. Maslova danced the role of Terpsichore and Molina Soca was Apollo in Balanchine’s choreography to Stravinsky's music. (Photo courtesy of Jennifer Wellington)[/caption] ALL-STRAVINSKY Earlier Sunday afternoon, I caught the final performance by Pennsylvania Ballet of its all-Stravinsky program at the Merriam Theater. Two of the four ballets danced were choreographed by George Balanchine, a third was the company premiere of a ballet by Jerome Robbins, and the fourth was a commissioned world premiere by Matthew Neenan, the company’s choreographer-in-residence. Set to Stravinsky’s “Tango” and Piano Sonata, here played splendidly by Martha Koeneman, Neenan’s “Deco” is an inventive, lyrical masterpiece that follows the Balanchine tradition of not just mirroring the music but delving into its very inspiration. Most impressive was Neenan’s visual evocation of the melodiousness of Stravinsky writing for the piano in his 1941 neo-classical sonata. Without ever short changing its acerbic harmonies and pointed rhythms, he nonetheless catches Stravinsky evoking the contrapuntal texture of Bach’s keyboard music by having the movements of his six dancers flow into and out of each other with nary a bump. Albert Gordon, Jacqueline Callahan, Kathryn Manger, Zecheng Liang, Jack Sprance and Peter Weil were the exemplary performers. Balanchine’s “Apollo” opened the program. Commissioned by Sergei Diaghilev’s Ballet Russes in 1928, it’s something of Stravinsky’s neo-classical answer to Debussy’s impressionistic “Prelude to the Afternoon of a Faun,” just as it’s Balanchine’s neo-classical answer to Nijinsky’s scandalous choreography to the Debussy. And yet, both the music (originally called “Apollon Musagete”) and the dance are, in their way, every bit as erotic as the Debussy/Nijinsky outing. At least they were during the pas de deux featuring Arian Molina Soca as the Greco/Roman god of the sun, poetry, drama, dance, music and prophecy and Roxborough’s Oksana Maslova as Terpsichore, the Muse of Dance. Their performance was so delicately romantic yet technically secure that its conclusion elicited a yelled “bravo!” from a member of the audience and an ovation that stopped the show. Maslova’s extended line was like an unbreakable silken thread while Molina Soca flawlessly projected Balanchine’s choreography by inhabiting Stravinsky’s music after channeling the aesthetic and ethos of Apollo. Dayesi Torriente and Nayara Lopes were lovely as Polyhymnia and Calliope. And the concluding tableau of the four dancers silhouetted against the rising sun was stunning. I wasn’t much impressed with Jerome Robbins’ “The Cage” to the Concerto for Strings in D major. It combines the unenviable qualities of “silly” and “creepy.” But the music of “Stravinsky Violin Concerto” is a neo-classical virtuosic masterpiece, and Balanchine’s 1972 choreography ups the ante one step higher. Standouts Sunday afternoon were Mayara Pineiro and Sterling Baca. The rhythmic precision of Pineiro’s dancing was like that of the immaculate construction of a priceless Swiss watch while Baca made the most intricate of steps seem effortless while at the same time investing them with electrifying vitality. 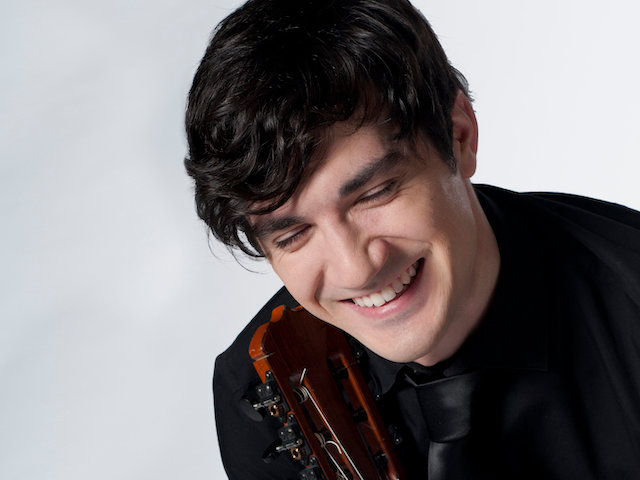 Guitarist Jordan Dodson was the soloist with the Chamber Orchestra of Philadelphia in the commissioned world premiere of local composer Andrea Clearfield’s “Glow: Concerto for Electric Guitar and Chamber Orchestra." (Photo courtesy of Leslie Johnson)[/caption] CHAMBER ORCHESTRA The Chamber Orchestra of Philadelphia and its music director Dirk Brosse continued their season of “Migrations” Sunday afternoon, March 31, with “The Americas” in the Kimmel Center’s Perelman Theater. The house was packed to hear a well conceived and finely performed program of music by Manuel de Falla, Heitor Villa-Lobos, Emmanuel Chabrier, Steven Gerber, Jordan Dodson and the world premiere of local composer Andrea Clearfield’s “Glow for Electric Guitar and Chamber Orchestra.” The concert’s exemplary soloist was Curtis Institute of Music alumnus Jordan Dodson. Clearfield’s use of a lightly amplified electric guitar opened up a new world of tonal possibilities that enabled Dodson to sustain legato lines that would never have been audible in a 600-seat theater on a purely acoustic guitar. The result was an immaculate balance between the orchestra as a whole and the stringed solo instrument. Neither overwhelmed the other. The two forces were able to maintain an ongoing dialogue that spanned the entire scope of emotions and the timbres Clearfield chose for their expression for the score’s three movements: “Sing,” “Streak” and “Glow.” Dodson’s playing was most noteworthy for its dynamic restraint, its ability to work within the larger instrumental texture as well as take center stage as a soloist, its coloristic variety and its eloquent lyricism of sustained melodic lines. Brosse and the musicians of the Chamber Orchestra of Philadelphia gave him sensitive yet vibrant support. Dodson was also the soloist in Villa-Lobos’ Concerto for Guitar, a beautiful score that deserves far more frequent hearing. Here playing on a traditional acoustical guitar that was lightly amplified into the house’s own system, he projected the music’s tart harmonies, pulsating rhythms and courtly lyricism. And his charming take on The Beatles’ “Across the Universe” happily reminded me that I had heard the “Fab Four” twice in concert. Brosse and the Chamber Orchestra opened their concert with a sultry reading of Falla’s Suite from “El amor brujo.” Following intermission, they gave Chabrier’s “Habanera” a stylish interpretation and Gerber’s “Homage to Dvorak” an impassioned performance. ‘ROMEO AND JULIET’ Yannick Nezet-Seguin and the Philadelphia Orchestra welcomed Brian Sanders’ JUNK to join them for three performances of selections from Sergei Prokofiev’s ballet score, “Romeo and Juliet.” The concerts took place in the Kimmel Center’s Verizon Hall April 4-6. I caught the Saturday evening performance with an audience that packed the house. Most local ballet lovers know the Prokofiev score from the productions mounted by the Pennsylvania Ballet in the Academy of Music. The local troupe opened its 2018-19 season with Sir Kenneth MacMillan’s choreography to rave reviews only a few months ago. Former Philadelphia Orchestra music director Riccardo Muti considered it the finest score ever composed by the 20th century Russian master. For these performances, Nezet-Seguin cut more than a handful of scenes from the work to fit it into the normal two-hour span of a typical concert, and Sanders’ acrobatic gymnastics enhanced approximately one-third of the scenes that were programmed. All the same, a reasonably convincing narrative line was sustained from start to finish, especially if you already know the story of the original play by William Shakespeare for which the music was written. The only problem was the limited vocabulary available to JUNK’s members. Perched on a shallow platform that extended out from the first tier’s “conductor’s circle” and relying almost exclusively on acrobatics with only a few brief touches of gymnastic gestures, the performers were visually exciting but expressively constricted. There was nothing constricted, however, about either Nezet-Seguin’s interpretation of the music or the Philadelphians’ rendition of it. The young maestro saw the score in both broad strokes and intimate details, and the Orchestra’s players responded with sumptuous sounds, bracing textures and scintillating rhythms. Best of all was the acoustical sound in Verizon Hall. To accommodate JUNK’s acrobatics, the ceiling panels were raised to their highest possible level. The result was a far more expansive sonic ambience than that which I’ve heard in Verizon in recent seasons. Perhaps this is where those panels should remain. You can contact NOTEWORTHY at Michael-caruso@comcast.net. To read more of NOTEWORTHY, visit chestnuthilllocal.com/Arts/Noteworthy