Chris Anthony and Anthony Marsala are seen at The Stagecrafters, 8130 Germantown Ave., in Bruce Graham’s comedy-drama, “Something Intangible,” now running through Feb. 15. The play is loosely … 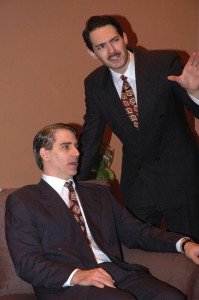 Chris Anthony and Anthony Marsala are seen at The Stagecrafters, 8130 Germantown Ave., in Bruce Graham’s comedy-drama, “Something Intangible,” now running through Feb. 15. The play is loosely based on the lives of Walt Disney and his brother Roy. (Photo by Sara Stewart)[/caption]

For better or worse, no one could be more American than Walt Disney. Now running at Stagecrafters, "Something Intangible" by Philadelphia area playwright Bruce Graham throws a spotlight on his Herculean struggle in bringing the now classic film "Fantasia" to movie screens.

There is nothing vague about the Disney references in "Intangible.” Tony Wiston (Chris Anthony) is clearly Disney himself. Dale Wiston (Anthony Marsala) is his long-suffering brother, Roy. Gustav Von Meyerhoff (Michael Tarringer) is the vainglorious conductor, Leopold Stokowski, and Petey Pup is Mickey Mouse.

You even see Disney's distinctive signature on a distant water tower through the rear window of Scott Killinger's splendid set design. The play grows out of the ongoing therapy sessions Dale has with psychiatrist, Sonia Feldman (Susan Mattson), where the dark side of Tony's character emerges.

You know that "Fantasia" was indeed produced so there is no suspense about a "happy ending.” It is a tribute to the power of Director Barbara D. Mills' production that "Intangible" holds you spellbound for two hours.

Much owes to the magnificent performance of Chris Anthony as Tony Wiston. Tony holds court in his office -- harried, creatively inspired, angry, comical, bullying and thoughtful. His bewildering stream of moods is accented with eye-catching changes of clothes (Costumes, Jane Jennings).  He even looks like young Disney!

But historical drama gets dicey when fictional embellishment clashes with known facts because it can make it harder to suspend disbelief. In "Intangible" banker Doc Bartelli (Mike Mogar) warns Tony that his chronic womanizing endangers his clean-cut public image.  But did the real Disney even have this problem?

And we know for sure young Walt did not leave home for good when he was twelve because his meanie father insisted he work in the coal mines. How Mickey Mouse!  But the show is strong enough to overcome these glitches and creates a vivid experience of an artist whose inspiration was inseparable from his tunnel vision.

Tony can only see his private ideas, and he uses everyone around him. A taskmaster and perfectionist, he reduces young cartoonist, Leo (Danny Donnelly), to despair. Nor can he appreciate the social skills and sacrifice of brother Dale who does all the tough, practical negotiations.

The ongoing irony in "Intangible" is that Tony has creative genius but no concept of his dependence on Dale and Leo. He is always comically obtuse to the pain he causes. The play makes you wonder about people who do great things. If they were "cured" of their character flaws, would they still have the drive to do their work?

Disney has achieved folk hero status. After "Fantasia" he went on to produce a vast body of work. It is troubling that so much of it is cuddly and cute, yet has come to culturally underpin American claims to "Exceptionalism.” His influence is alive today, and "Intangible" taps into our need to know who he really was.

Stagecrafters is located at 8130 Germantown Ave.  "Something Intangible” will run through Feb 15. Reservations and information available at 215-247-8881 or www.thestagecrafters.org.