The most talented Springside basketball team in school history paid a visit to Germantown Academy last Tuesday afternoon, launching the 2011 portion of the season against the perennial Girls Inter-Ac League champs.

GA jumped out to an 11-2 lead in the first five minutes, but the visiting Lions regrouped to avoid an early rout. They still had their deficit in the single-digit range two minutes into the fourth quarter (45-36), but Springside faded in the stretch run and the Patriots pulled away to win 61-37, collecting their last 11 points on free throws. The outcome gave GA a 2-0 mark in the league, and Springside came away 2-1. 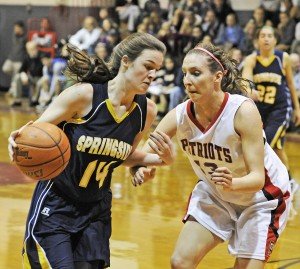 Returning to action for the first time was one of Springside’s two injured senior guards, Brenna Coll, who hit one midrange jumper in each half. GA was missing sophomore guard Dempsey Cooper, normally one of the first players off the bench for the Patriots.

Coming into the contest, neither team had lost on Pennsylvania soil. Since falling to a pair of regional powerhouses in Maryland, Springside (9-3 overall) had notched nine straight victories. GA (8-2) started out 5-0 before making a late-December sojourn to Florida. At the Naples Daily News Holiday Shootout, GA won its opener and then defeated Radnor’s Archbishop Carroll in the quarterfinals, 41-36.

In the semifinals, the Patriots lost by two points to the eventual champ, Maryland’s Our Lady of Good Counsel, and then succumbed in the third-place game to another D.C.-area team, Oakton High School of Vienna, Va.

Junior point guard Jaryn Garner, who led Germantown over Carroll with a 15-point performance, said the Pats had a clear objective on defense going into last week’s league clash with Springside.

“It was definitely stopping Sydni Epps,” said Garner, referring to Springside’s dynamic 5’11” guard, also an 11th grader. “We wanted to stay low on the drive and stop her from penetrating, which she’s good at. We just wanted to keep the ball out of her hands; if she has it and passes it, don’t let her get it back.”

The Lions were not quite as focused on defense. They did manage to hold DePaul-bound guard Alexa Gallagher to 11 points, five of them coming from the foul line in the final three minutes. Still, the senior came up big elsewhere with eight rebounds, six steals, and three assists, while Springside slipped up against another GA upperclassman.

It’s no secret that point guard Monica Schacker (committed to the University of New Haven) is GA’s primary long-range threat, and she shelled the Lions from the perimeter and did some damage inside, as well.

After netting just a lone free throw in the initial nine minutes, the compact guard proceeded to sink four three-pointers and hit two lay-ups on drives. Five-for-six on free throws, she logged a game-high 21 points.

“GA is a team that you just can’t make mistakes against,” commented Lions coach Brian Morris. “We knew they were going to come with their guards. I thought we defended Gallagher well, but we didn’t do a good enough job closing out on Schacker.”

A dozen points came from GA sophomore forward Kiernan McCloskey (six steals four rebounds), who did her scoring in spurts due to foul trouble. She nailed the Patriots’ first three field goals of the day and then added three more buckets in the third quarter, two of them off of steals.

McCloskey’s early field goals and a Schacker free throw outweighed a lone basket by Lions junior Michelle Boggs to make it 7-2, then came a sequence which foretold much of what was to follow. After the Lions missed three straight shots from right under the backboard, GA sophomore Natalie Toner came down the court to score a lay-up in transition.

Gallagher went coast-to-coast off a steal to make it 11-2, then Springside finally netted a second field goal, a lay-up by freshman center Erin Garner. The 6’3” Garner (no relation to GA’s Jaryn) would wind up second in scoring for the Lions, with nine points.

It was 13-6 at the quarter, and a few minutes into the second round Lions junior Elana Roadcloud converted a rebound to start accumulating a team-high 14 points. That made it 17-12, and it was evident that Springside was not going to go away quietly, as it had in past encounters with GA.

However, with McCloskey leaving the floor her third personal foul early in the second quarter, Springside missed an opportunity to erase its deficit entirely. Instead, GA widened the gap, and eventually Schacker’s second “three” made it a double-digit game at 28-18.

Against a larger Springside front row (particularly with the six-foot McCloskey on the GA bench), the Patriots knew how they wanted to attack.

“Work the high-low; get the ball inside, kick it back out,” Garner explained. “They swat a lot on defense, so we wanted to drive into them and try and get the foul.”

Morris said, “We needed to defend better. They were getting second and third-shot opportunities on a lot of possessions, and a team like GA is going to kill you if you let that happen.”

At the end of the second quarter, two free throws by Roadcloud set the halftime count at 28-20. The junior shot 10-for-15 from the stripe over the course of the game, and Morris noted, “Elana has really stepped up for us the last couple of weeks. She’s been terrific.”

Roadcloud, Garner and Coll matched three baskets by McCloskey early in the third round. Germantown finished the quarter with a 6-3 spurt, but the good news for Springside was that Epps was on the board at last, hitting a lay-up with 1:09 left and then adding a free throw.

She started the final period with a three-pointer, then a lay-up by GA senior Dana Lotito was answered by two free throws by Roadcloud, raising the score to 42-34 with seven minutes to go. After that, though, the Lions netted just three more points in the game, all on free throws.

Down the stretch, the Lions began to foul for ball possession and the Patriots, just four-for-11 at the line over the first three quarters, made 11 of their 14 foul shots in the final three-and-a-half minutes.

“We put them on the line a lot, so you had that big margin at the end,” Morris noted, “but anyone who was there knows that it was a much closer game most of the way. The beauty of our league is that you get a second shot at everybody, and we’ll be at home the next time.”