The building has been vacant since the city closed the high school back in 2013. 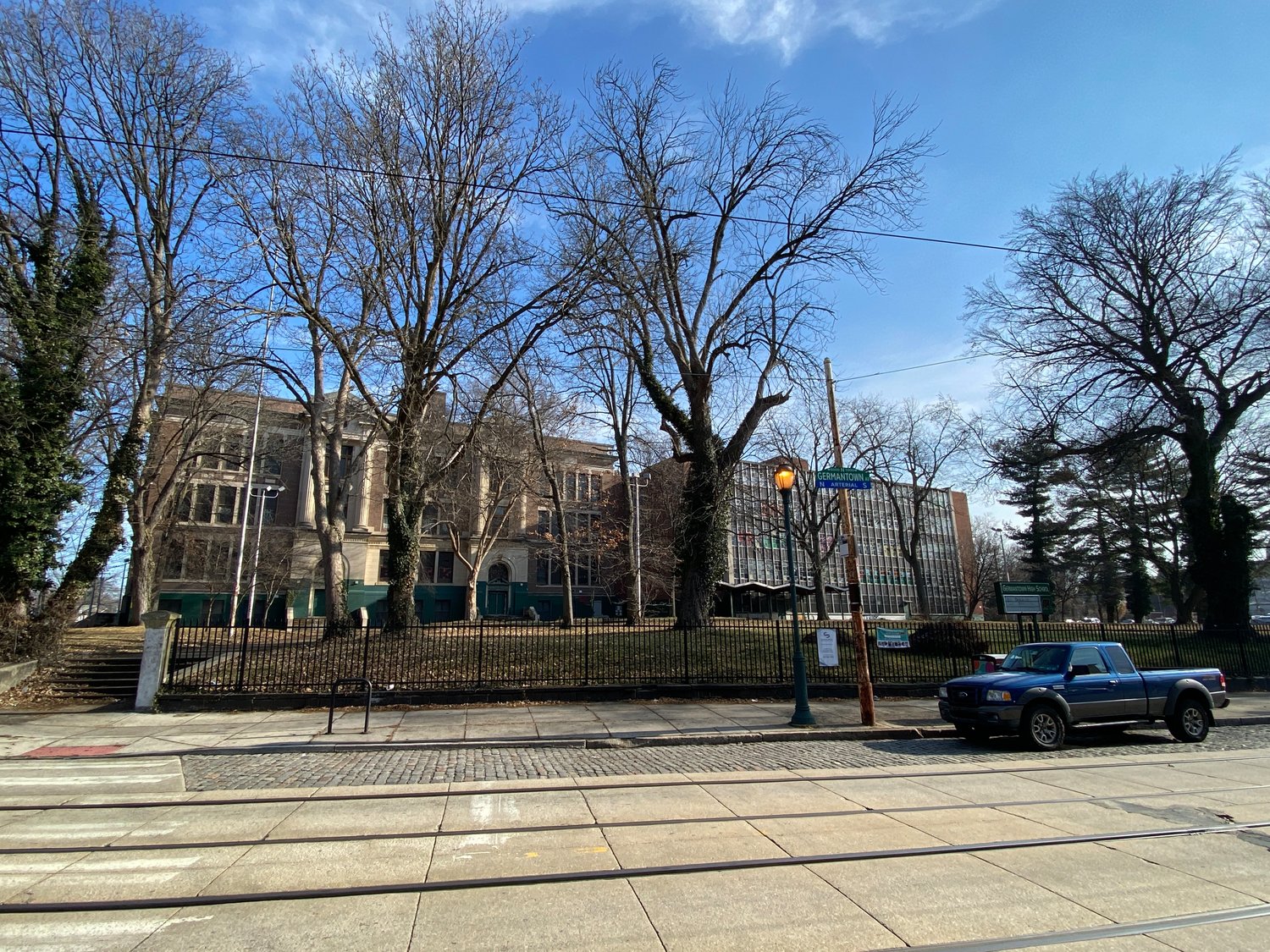 The Germantown High School building, vacant since 2013, is being prepped for development. Photo by Tom Beck 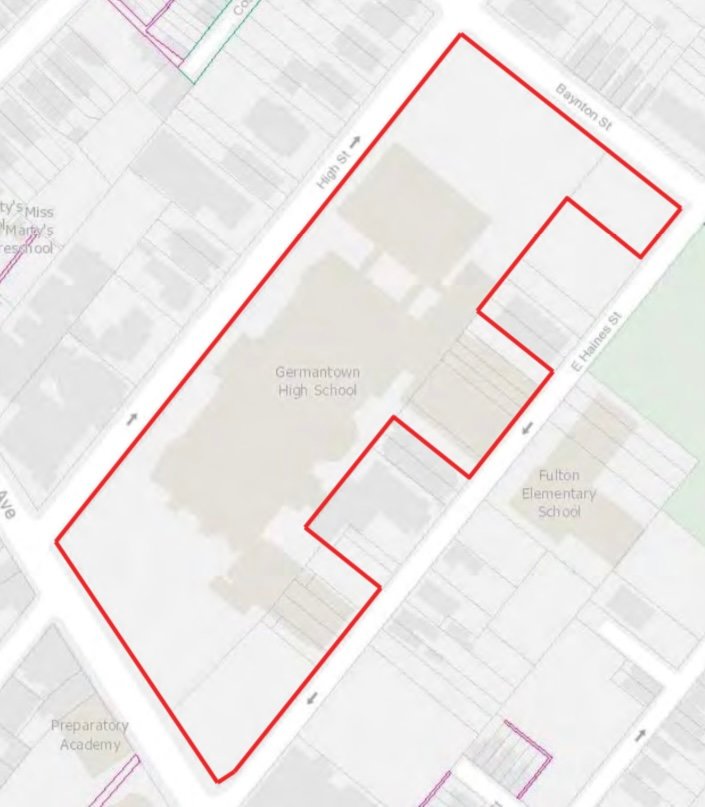 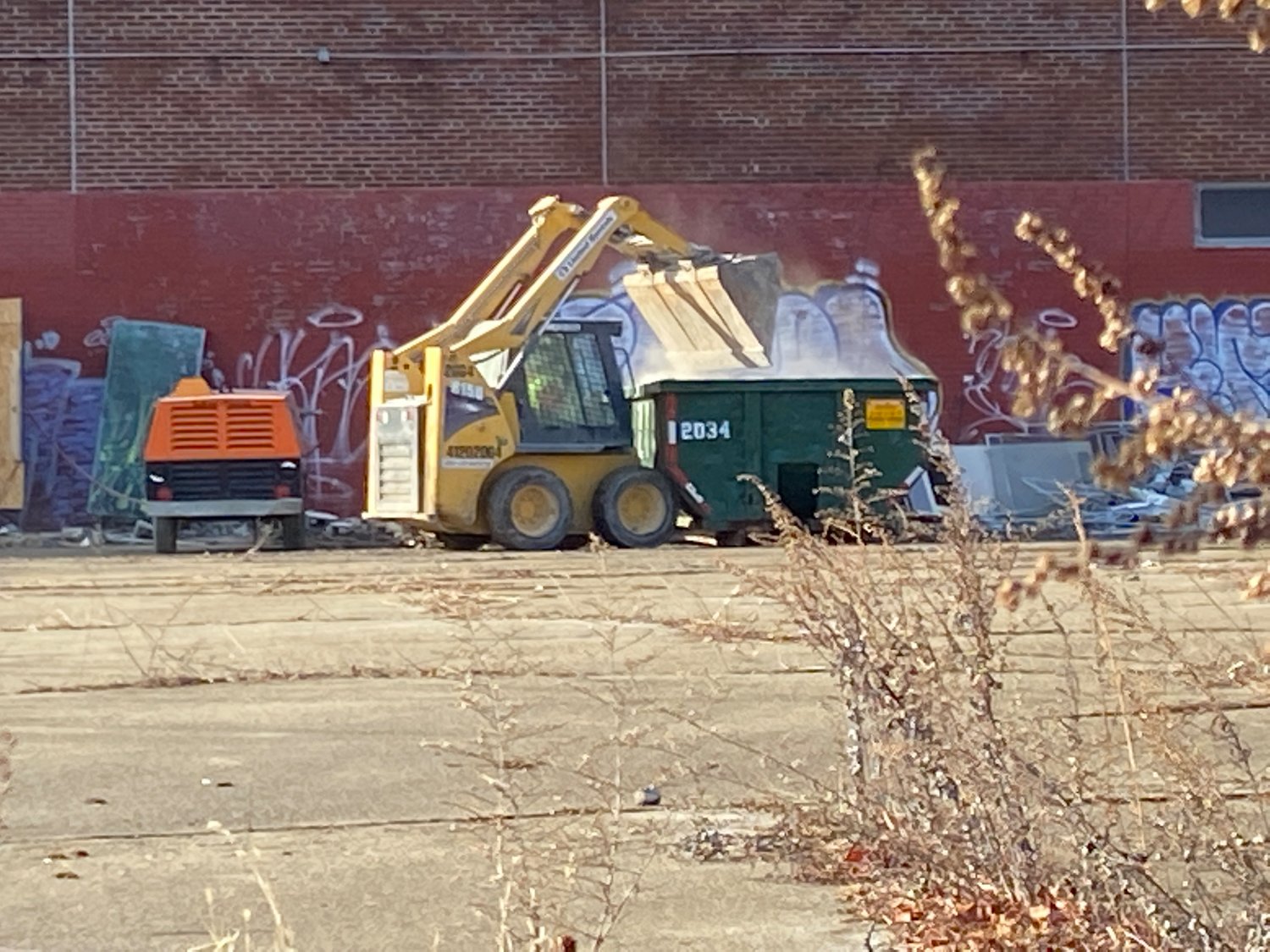 Workers were seen removing what appeared to be chunks of concrete from inside Germantown High School and putting them in a dumpster last week. Photo by Tom Beck
Previous Next
Posted Wednesday, February 23, 2022 1:58 pm
by Tom Beck

The redevelopment of Germantown High School is officially underway. Workers were seen hauling demolition debris out a rear entrance to the building and into the former school’s parking lot last week.

According to city records, developer Jack Azran was granted a building permit in December to turn the massive building into apartments. At the moment, however, Azran says he hasn’t finalized plans for the project.

“We’re not sure exactly what we’re dealing with,” he told the Local last week. “We’re just getting the building cleaned up at this point.”

The building has been vacant since the city closed the high school back in 2013. The site, which occupies the entire eastern side of Germantown Avenue’s 5900 block, is large enough that whatever happens there will have a major impact on the neighborhood’s Germantown Avenue business corridor.

Emaleigh Doley, executive director of the Germantown United Community Development Corp. said she’s happy to see that work is getting started, since the last seven years of it sitting vacant have not been good for the neighborhood.

“Students were customers,” said Emaleigh Doley, executive director of the Germantown United CDC. “Obviously, everyone can agree that a vacant building is problematic for a lot of reasons and hasn't been good for the business corridor.”

According to published reports, Azran has considered a proposal that includes 236 units and 159 parking spaces, complete with a cafe, coworking space, a charter school and community facilities. The zoning classification allows for a maximum of 277 dwelling units.

The school’s development getting underway would seem to signal a trend. It is the third of Germantown’s very large and civically-important vacant buildings that is suddenly the focus of developer interest. The Philadelphia Redevelopment Authority is taking steps to find a new developer for the YWCA, which is located a few blocks south of Germantown High School at the corner of Vernon Park, and developers are signaling interest in the neighborhood’s original Town Hall, which sits just down the street, in front of the 14th District police station.

Add to that the Fulton Elementary School building on East Haines Street, another large building right across the Street from the high school that has been vacant since it was closed in 2013 and “you’re talking about a massive amount of vacancy,” Doley said.

While development of the high school would remove an active source of blight and bring increased economic activity to the corridor, neighbors are wary. They have no idea what the developer is planning, they say, because he has not been communicating with them.

Germantown High School was one of 23 School District of Philadelphia schools to close in 2013 due to dwindling enrollment and budget cuts. It has sat vacant ever since.

In 2017, Azran acquired the property for $100,000 - only about six percent of its assessed value. Then, in early 2020, word that the developer planned to put a strip mall on the front lawn prompted neighborhood activists to get the building, and the lawn, added to the city’s Register of Historic Places.

The building’s historic nomination turned out to be a double-edged sword. It prevented the building from being torn down, but it also cut the community out of the development process - thanks to a 2019 piece of legislation that gave zoning relief to developers of historic properties. Developers Azran and Eli Alon no longer needed a zoning variance to turn the school into apartments, so they no longer needed to work with the neighborhood RCO.

“Once they didn’t need a zoning variance any longer, negotiations fell through and they stopped talking to us and they moved on without the community,” said Patrick Jones, president of the Germantown Community Alliance. “It was kind of a slap in our face that they sidestepped us in that way.”

The communication breakdown meant that neighbors' questions about the details of the property would go unanswered. And there were a lot of them.

“The near neighbors wanted to know plans for maintaining the site,” said Germantown Community Alliance’s vice president Cornelia Swinson. “Issues for maintaining trash, details about the hiring of local people, any minority subcontractors - those kinds of questions.”

The historic nomination document states that the building is “a monumental example of public-school architecture that conveys the investment and status associated with a public education in Philadelphia and the United States in the early twentieth century.”

The building also was “designed and constructed in the Georgian Revival style with Classical Revival elements,” according to the document. “Features of the 1914–16 Building that exhibit  distinguishing characteristics of the Georgian Revival include the symmetrical arrangement and design; the use of contrasting red brick with limestone and granite; the employment of double  height columns of the Doric order, as well as pilasters and piers throughout; and other features—pedimented doors; broken pediments over doors; and decorative pendants.”