Demonstration this Saturday in park to protest deer kill

Members and friends of Philadelphia Advocates for the Deer, who will be protesting this Saturday on Bells Mill Road to protest the annual deer kill in the park, held a similar demonstration at …

Demonstration this Saturday in park to protest deer kill 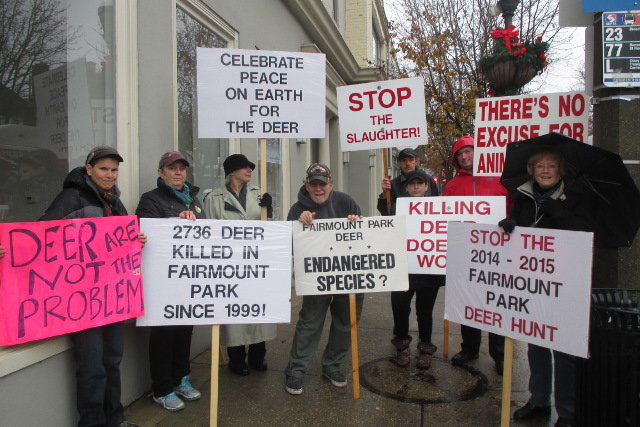 Members and friends of Philadelphia Advocates for the Deer, who will be protesting this Saturday on Bells Mill Road to protest the annual deer kill in the park, held a similar demonstration at Germantown and Highland Avenues on Dec. 6. Pictured (from left) are Lee Hall, Mary Ann Baron, Mary Barbera, Jim Harris, Jay Roberts, Rachel Ogden, Richard McIlhenny and Virginia Roberts. (Photo by Z. Schulz)

Philadelphia Advocates for the Deer (PAD) will be holding a picket demonstration this Saturday, Dec, 20, 11 a.m. to 1 p.m., west on Bells Mill Road from Germantown Avenue, down the hill about a third of a mile to the intersection with Forbidden Drive, a park entrance frequented by joggers and hikers. The purpose of the demonstration is to protest the unjustified, cruel annual slaughter of deer in Wissahickon Park.

An article I wrote on official deer-control policies in the Eastern U.S., titled “Beyond a Government-the-Hunter Paradigm: Challenging Government Policies on Deer in a Critical Ecological Era,” has been accepted for publication this coming Spring by the University of Oregon’s “Journal of Environmental Law and Litigation,” and I believe there is information about the deer of our area that needs more attention in our regional publications. In my article I briefly discuss the annual Fairmount Park deer kills, noting:

“When we approach the ecosystems we have destabilized with yet more disruptions in the form of killing animals en masse, a cycle of forcible population control begins, with reproduction followed by further killing. Consider the deer of Philadelphia’s Fairmount Park System. Since 1999, more than 2,500 deer have been killed in official culls in Fairmount Park, a total far higher than the original 159 deer living there when the alarm was first sounded.

Mary Ann Baron, co-founder of PAD, reports the current number of deer killed as 2,736 for all of Fairmount Park. Predictably, this approach is energy-intensive and costly wherever it is instituted, including in smaller towns. Forcible control also takes a toll in feelings of good will and community cohesion.

PAD and its supporters would like deer shootings to end, but we are always asked, “But what is the alternative?” Ideally, I'd posit that the best alternative is for Fairmount Park’s management to work with Pennsylvania to end the annual killing of coyotes. That is the way to work with nature, if we claim to care about it. Pennsylvania is home to an estimated 100,000 coyotes, with hunters and trappers killing more than 30,000 per year. The Philadelphia Inquirer in January of 2014 put the number of coyote killings at 40,000 by 2012.

People are wary of coyotes, of course, and I do not make light of this. Coyotes are wary of us as well! They even rearrange their schedules to avoid us; thus, they are rarely seen in the city, although I have seen two in the Philadelphia suburbs, and one day last year when I visited Walk A Crooked Mile bookshop in Mt. Airy, the owner, Greg Williams, told me of having seen a coyote in the area of the historic Mt. Airy train station. I think people are likely already aware of the coyotes’ presence, although few Philadelphians know how many there actually are.

Coyotes in and around Fairmount Park could check deer populations by taking old, sick and young deer in nature's proven way of keeping animal populations healthy. This is why some jurisdictions in the eastern U.S. are moving to carefully considered "coyote coexistence" plans. (Jeff Gammage discussed some of them in the Inquirer in 2010.) As coyotes already live in our area, coexistence is a natural.

I've read studies showing that deer enrich soil, with ripple effects throughout the food web, so robust deer populations can actually be quite a plus for biodiversity. And I'm seeing new studies suggesting that a natural balance of predator and prey actually puts the brakes on greenhouse gas releases! (A 2013 study from Yale School of Forestry & Environmental Studies, for example, finds evidence that in systems where only herbivores are present, plants tend to breathe out, rather than store, carbon.)

As for the Fairmount Park deer themselves, how does the killing change these animals? As few if any deer survive annual mass shootings to reach full maturity, the population of deer today in and around Philadelphia today is unnaturally young. What does this mean for their coping mechanisms and their evolution over time? Why would we impose changes we do not understand, especially if we could avoid this by increasing our reliance on natural dynamics?

Lee Hall is president of the 501(c)3 charity CARE (Compassion for Animals; Respect for the Environment) of the Delaware Valley and a member of PAD. She has been present at several deer-slaughter vigils in Chestnut Hill. She is also a lawyer who holds, in addition to a law degree, an LL.M. (Master of Laws) in environmental law. She can be reached at climatelaw@me.com.