Lynn Rosen, author of “Elements of the Table,” and her husband, Evan Schwartz, have proven so far that they can swim successfully against the tide of technology with their one-year-old Open Book … 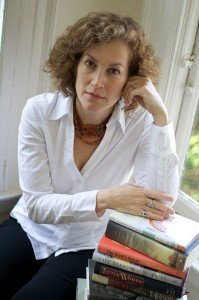 Lynn Rosen, author of “Elements of the Table,” and her husband, Evan Schwartz, have proven so far that they can swim successfully against the tide of technology with their one-year-old Open Book Bookstore at 7900 High School Rd. in Elkins Park, which has attracted several customers from Chestnut Hill. (Photo by Patrick Snook)[/caption]

Every major publication from Time magazine to the New York Times to the Wall Street Journal has lamented the fact that in recent years bookstores have been vanishing more quickly than rhinoceroses in the wild because, among other reasons, so many of the younger generation seem to be unable or unwilling to read anything that is not on a small screen.

Yet, in the ultimate example of optimism, even though all the signs of the Zodiac and of common sense seem to argue against it, local 50-ish author Lynn Rosen and her husband, Evan Schwartz, seemed to dive off the cliff of sanity when they opened the Open Book Bookstore in January of 2015 at 7900 High School Rd. in Elkins Park.

“We have often been asked, ‘Why would you open a business in a dying business model?’” Lynn conceded last week. “But we didn’t feel that way, and statistics now back us up. Membership in the American Booksellers Association has increased 22% since 2009. The Los Angeles Times just reported that ‘In December, Nielsen BookScan reported that 571 million print books were sold in 2015, 17 million more than the year before. Meanwhile, e-books, which were once predicted to reach 50% to 60% of total book sales, hovered at just 25%.’

“In addition, studies (including one by Naomi S. Baron), have shown that many younger readers, those whom we call ‘digital natives,’ actually prefer print when reading for studying or for entertainment. And, after having seen our bookstore thrive for over a year now, no one asks us anymore why we opened it.”

So far the community seems to have welcomed and embraced the store. Rosen, who says she has several customers from Chestnut Hill, insists they “regularly have people walk into the store and say ‘Thank you for what you are doing for our community.’” In addition to offering a curated selection of books, the store offers many events, including book discussion classes, author readings and community events, such as one in January for caregivers and a “How to Love a Poem” party planned for February.

Schwartz has a full-time job as a copywriter, so Rosen works in the store on weekdays, and Evan works weekends and Thursday evenings, when they’re open late. Lynn also does a lot of freelance writing and editorial work. (She was a book editor and literary agent for many years.) Unlike the mega-book stores that have so far avoided the executioner’s guillotine, the Open Book Bookstore tries to avoid best sellers and focus instead on books that people might not otherwise know about.

“We believe,” said Lynn, “that our value is in steering readers toward books they might not find on their own. They don’t need us to find the big bestsellers. For example, for years I’ve been telling people what a great book ‘Brooklyn’ by Colm Tóibín is. Now it’s a movie (although not because of my recommendation)! I often recommend a dark and wonderfully-written novel called ‘Serena’ by Ron Rash (also made into a movie, but a bad one!) and ‘The Archivist’ by Martha Cooley.”

Evan loves to recommend, among other books, ‘Station Eleven’ by Emily St. John Mandel and, for ‘80s’ fans, “Ready Player One’ by Ernest Cline.” Another plus for Open Book is that they like to promote books by local authors such as “Life Drawing” by Robin Black, “Henna House” by Nomi Eve and “Standing Still” by Kelly Simmons. In the children’s book category, Lynn praises David Wiesner and Zachariah OHora.

Lynn, who grew up in Dresher, started out as an editorial assistant in college publishing and then moved to trade (general consumer) publishing and became an editor at Ballantine Books, a division of Random House. In both of these jobs she acquired and edited serious non-fiction books. In 1991, she launched her own literary agency, which she named Leap First, “to reflect my belief in taking chances.” In her eight years as an agent, she worked with academic authors such as Myra & David Sadker, authors of “Failing at Fairness: How America’s Schools Cheat Girls,” associations such as the American Dietetic Association and other authors such as Byllye Avery, founder of the National Black Women’s Health Project. Lynn helped her clients develop and shape new book ideas.

Lynn is also the author of “Elements of the Table: A Simple Guide for Hosts and Guests” (Clarkson Potter/Random House). Journalist A.D. Amorosi of Philadelphia’s City Paper called her “The First Lady of the Fork,” and Publishers Weekly magazine called her “a more forgiving Miss Manners.” Her book, “Elements of the Table” looks at everything on the table — including silver, china, crystal and decorative items — and describes how to properly use it, along with some fun dining history. Did you know, for example, that napkin rings were invented so you could make sure you got the same napkin at each meal, since no one laundered them in between?

The book has done well and is now in its third printing. “I was happy to see piles of it pop up at a few stores over the holidays, including Ballard Designs in King of Prussia,” said Lynn. “A friend of mine was on vacation in California, and she texted me a picture of herself holding my book, which she found in the gift shop at the Getty Museum. That made me very proud!”

When asked, “If you could meet and spend time with anyone on earth, who would it be?” Lynn replied, “These days, both as a bookseller and wannabe novelist,  I'd like to hang

out with Ann Patchett at her store, Parnassus Book in Nashville. I love her

work, and I love what she's doing supporting the reading community.”