Death threats were not wasted on Lynn Hoffman: His new book is terrific

Lynn Hoffman readies for radiation. by Hugh Gilmore Lynn Hoffman and I had been friends for about a year when he called me at the gym. I stopped pedaling the cardio machine and pressed my cell phone …

Death threats were not wasted on Lynn Hoffman: His new book is terrific 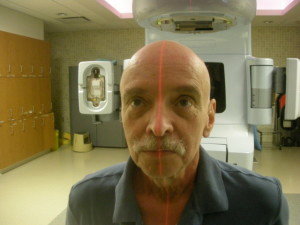 Lynn Hoffman and I had been friends for about a year when he called me at the gym. I stopped pedaling the cardio machine and pressed my cell phone to my ear. He told me he'd just been diagnosed with stage IV cancer of the throat.

"If I live, I may lose my ability to speak and taste," he said.

That was the only lament I heard from him then and in the five years since. He seemed to care less about whether he lived than about how he lived. And now he's written a book about his experience, "Radiation Days."

Based on a blog he maintained throughout his treatment, the book is unlike any of the many cancer survival memoirs now on the market. It mixes unapologetic intelligence with good will and serves that combo up with the attitude you'd expect from an educated (a doctorate in anthropology) guy from Brooklyn (whose Ph.D. thesis was based on his Merchant Marine service). He ain't buying it, Doc.

Hoffman was facing an ironically threatening crisis for a man who makes his living by writing and talking about good food, wine and beer. He'd done that nearly all his adult life. He's also a poet, novelist, cook, beer brewer, kayak builder and sailor.

His knowledge in most of the subjects we've ever discussed runs both wide and deep. But what good is knowledge when it can't be shared? Losing your voice when you're a great speaker, losing your sense of taste when you're a gourmet – well, treatment might leave him alive, but in need of a new self-definition.

Yes, he can write – quite well – but he always seemed to live and breathe to stand before an audience and preach, brother, preach about the pleasures they could be experiencing with this wine, or that beer, or this here sheaf of poems he was about to croon.

So he "fought" the cancer as Americans say, meaning he submitted himself to medical treatment and followed his doctors' advice between radiology and chemotherapy sessions. Though those twin stresses debilitated him terribly, he kept an online blog through every stage of his treatment at Fox Chase Memorial Cancer Center. Hoffman's blog was funny, detailed, sharp and original and it has since been polished and turned into a very smart, quite offbeat book whose full title is, "Radiation Days: The rollicking, lighthearted story of a man and his cancer" (Skyhorse Publishing, July 1, 2014).

I'm sure this book will be given to other cancer patients or their friends and families, as a source of support or inspiration. However, I want to stake a claim for its being a readable and enjoyable book on its own, despite bearing the weight of those dreadful title words "cancer" and "radiation." (You can see the publisher's marketing department trying to lighten things up by surrounding those words with "rollicking" and "lighthearted.")

The real subject of this book is Hoffman himself. The story begins with his waking at 2 a.m. with a really sore and bloody throat, going to the emergency room at Temple University Hospital, getting lots of diagnostic tests, going home, coming back a week later and being told in a dramatically blunt way (which he has never forgiven) that he has throat cancer.

The fast pace of the story gets faster then as Hoffman describes his treatments, their effects on him, and his ongoing battle to translate medical-ese into language that a patient can understand.

This book could serve as a "So you just found out you have cancer ..." guide through the circles of medical hell. Along the way there are villains, heroes, and heroines. There is friendly advice to those of us not struck yet in life's big dodgeball game. Lots of information casually offered. Advice too, gently tendered. Recipes, even – for how to blend up something one can get down when too nauseated to eat. And when to drink it.

Hoffman survived the treatment. It was successful too – in that cautiously stated way that must now be adopted: no signs of cancer present at this time.

In fact the book eases into the philosophy of what it means to be human, what is the measure a life's worth, and what is important enough to ask for your time when your time might be scarce. This is a book about the getting of wisdom written by a man who was learned and wise and funny even before he was forced to enter Round Two of Life's Weird Sweepstakes. As the title of this piece says, death threats were not wasted on him. The rest of us are the beneficiaries of what he learned.

How to handle being mistaken for Bernie Sanders

The reading chair saga: I nail the ending, sit down and shut up

Henri Matisse, a dollar, a postcard, and a custody trail