Suyapa Reyes fled from her native country, Honduras, under death threats and is now being given sanctuary at the First United Methodist Church of Germantown because she is in danger of being sent … 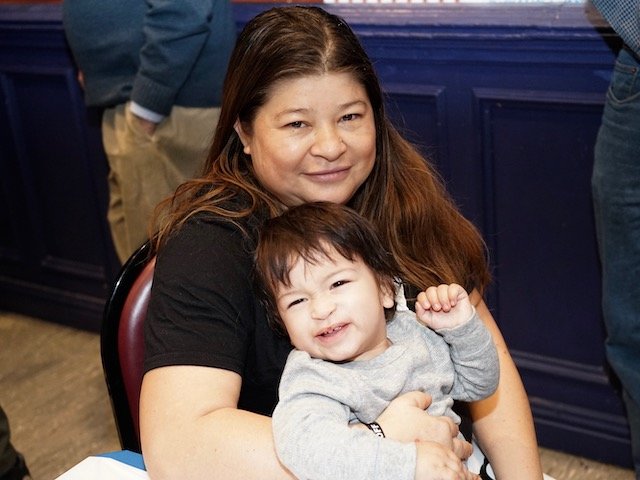 Suyapa Reyes fled from her native country, Honduras, under death threats and is now being given sanctuary at the First United Methodist Church of Germantown because she is in danger of being sent back by ICE (Immigration and Customs Enforcement).

Some unusual prayers may come from the Sunday School classroom that now serves as a bedroom for immigrant Suyapa Reyes and her children at the First United Methodist Church of Germantown (FUMCOG). “I pray to go on living here in sanctuary until ICE decides my case,” she said. Reyes, 37, fled from her native country, Honduras, in 2014, under death threats. “I feel safe here.”

Reluctant to pinpoint her hometown for fear it would trigger violence against family members in Honduras, Reyes had successful businesses there.

“I had a clothing store,” she said. Reyes also made and sold tamales. But in 2014, a dispute arose, and Reyes began receiving death threats. “I had to leave,” said Reyes, who traveled to the U.S. with her daughters, Jennifer and Yeimi, ages 9 and 3, respectively. “I don’t have a husband. I had to make all the arrangements. I left my two boys in Honduras with family members,” she said, and began to cry. “I miss them.”

The trip to the U.S. by bus, car and sometimes on foot, took two months. “We stopped for 16 days in Reynosa, Mexico (on the southern bank of the Rio Grande River),” Reyes said. “We had to get together money to go on, a hard task because I had the children with me.”

But Reyes found a way. “People (seeking to cross into the U.S.) would sometimes arrive sick, half-naked, beaten up,” she said. “I would take care of them, get a chicken and cook for them. When they moved on, they would leave me a little money.”

Reyes and her daughters made it across the border, but they were caught in the spring of 2014. She applied for legal residency and eventually made her way to Pennsylvania. “At first, I harvested grapes, but it was so cold!” She hugged herself and shivered. In November of 2014, she arrived in Philadelphia and lived in an apartment she shared with other Hondurans. In 2015, she began a relationship with a man who seemed caring and ambitious, believing that together they could get ahead faster. In time, she became pregnant. It was a difficult pregnancy. Her blood sugar soared because of the stress of making a new life. “Even with insulin the doctors couldn’t control it,” Reyes said.

During a crisis before she gave birth to her son after only eight months, she heard a conversation that devastated her. When doctors at Pennsylvania Hospital told her that her labor could have complications, her partner responded, “Above all, save my son.” In the end, Reyes and Yeison, now three, both came through.

Reyes began using her culinary skills again in 2016 by making tamales and dinners, but her relationship spiraled down. “He would rape me,” she said. “I couldn’t take it. And I was afraid of what he might do to my daughters.” Reyes made the man leave but found herself pregnant again.

Meanwhile, ICE turned down Reyes’ application for residence. Afterwards, they kept tabs on her by having her check in every two weeks. “On Aug. 14, 2018, they told me that I had to leave the country by Sept. 14,” she said, “and that my two children born here would have to remain. How could I be separated from my children?” On Aug. 28, Reyes took sanctuary with her children in FUMCOG with the help of the New Sanctuary Movement of Philadelphia, an organization which “builds community across faith, ethnicity and class … to end injustice against immigrants…”

“Everyone here treats me so well,” Reyes said, “the pastor, the staff and Blanca Pacheco and Peter Pedemonti (they are co-directors of the New Sanctuary Movement), everyone. I feel safe here.” ICE seems to avoid arrests in “sensitive locations,” which includes houses of worship. For Reyes, the situation means not leaving the church. “I miss going out, shopping for groceries, the daily things that you do,” she said.

Reyes has the company of the Thompson family, who live in another Sunday School classroom. The Thompsons, who’ve also taken sanctuary in FUMCOG, left Jamaica to escape gang violence and lived in New Jersey for many years. Like Reyes, they don’t want to be separated from their children born in the U.S. Reyes speaks no English, and the Thompsons speak no Spanish, but they communicate through gestures and Google translate. The children of both families are picking up one another’s language.

“I want to stay here while ICE reviews my case,” Reyes said. “I’m mother and father to my children. I can’t leave them.”

Ed. Note: All quotes from Reyes in this article were spoken in Spanish to freelance writer Constance Garcia-Barrio, a retired Romance Language professor at West Chester University, who translated the comments into English. Dinners to benefit the Reyes and Thompson families take place the last Friday of each month, starting at 6 p.m. The families prepare delicious Honduran and Jamaican food. “People donate what their heart moves them to give,” Reyes said. Guests can also learn about the New Sanctuary Movement of Philadelphia by calling 215438-3677.

A most unusual birthday present for Mt. Airy pastor