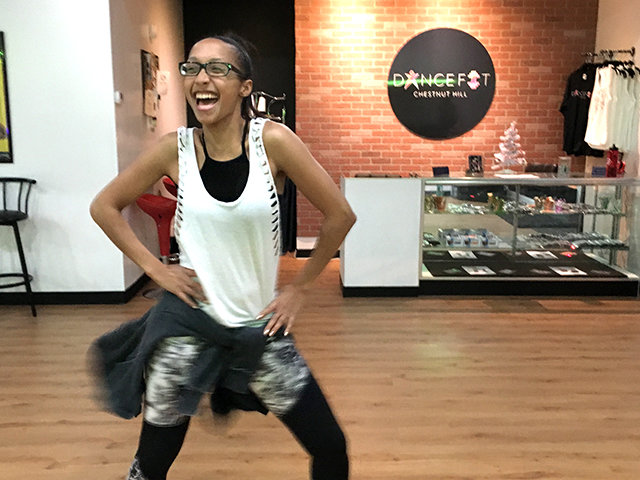 Bria Moss-Wilkerson leads a class in her new studio. (Photo by Elizabeth Coady)

It's 2018! Time to make your New Year's fitness resolution!

Which inevitably turns into…

But 25-year-old Bria Moss-Wilkerson has another way: dancing your way to fitness.

“Our motto is 'Disguise your exercise,’” the recording artist-turned-entrepreneur said in a telephone interview. “It's not like we're in here trying to become body builders. The fun is just as important at the fitness. We laugh at each other, we laugh at ourselves.”

The dance studio joins Chestnut Hill Cycle Fitness and Tara Yoga along a stretch of Bethlehem Pike that Moss-Wilkerson has coined as Chestnut Hill's “Wellness Way.'' Owners of both businesses have been kind and supportive

Previously performing under the stage name BriaMarie, the Columbia, Md., transplant moved to the Hill in the summer of 2016 after driving through the neighborhood on her way to recording studio appointments in Oreland. She fell in love with the area.

“I have become a Chestnut hill girl,'' she said. “I walk to all my doctor appointments. I loved the Christmas lights. I got a library card at the library. I just love the neighborhood so much.”

The new studio's opening is the culmination of a whirlwind four months of planning by Moss-Wilkerson. She decided on launching the business in late July, and on Nov. 27 she opened her doors.

Chestnut Hill's newest shop owner said she “put a lot of hard work and research” into the effort.

“I don't have a lot of money with this being my first business,” she added. “I had my family come up from Maryland. I was here literally every day.''

“The Chestnut Hill demographic is a 40.4 woman,” Moss-Wilkerson said. “That's our clientele right now,''. “These ladies are coming in here and they're bringing their friends. It's just as much as a workout as a party with your friends.''

The studio will offer one of six dance styles to help you keep or achieve your sveltest self: Latin-inspired Zumba, pop-inspired “hip fit,” “'yoga booty ballet,”  “ballet Barrefit,” “dancefit bootcamp,” and “flex and stretch.”

Customers can sign up for as little as a single class costing $15 a pop or an unlimited number of classes for $160 a month. The studio has six instructors on staff and hopes to add more.

A special promotional “New You Wellness Day” is scheduled for Jan. 21 from 1 to 3 p.m. The event will include a 50-minute dance class followed by a 30-minute nutrition seminar and snacks. The fee is $20; $25 at the door.

Moss-Wilkerson's advice for maintaining that fitness promise to yourself makes it sound easy.

“Enjoying yourself, and then also getting a workout, is the best way to keep that resolution," she said.'

Residents, CHCA get lucky as ZBA appeal of former Sunoco site is delayed