D-Day in the book business for a formerly dull guy

A living room of books. by Hugh Gilmore On March 5, I received an email addressed to my used book business that said: “Hello, I have to move out more than 3000 books from my dad’s collection.” …

D-Day in the book business for a formerly dull guy 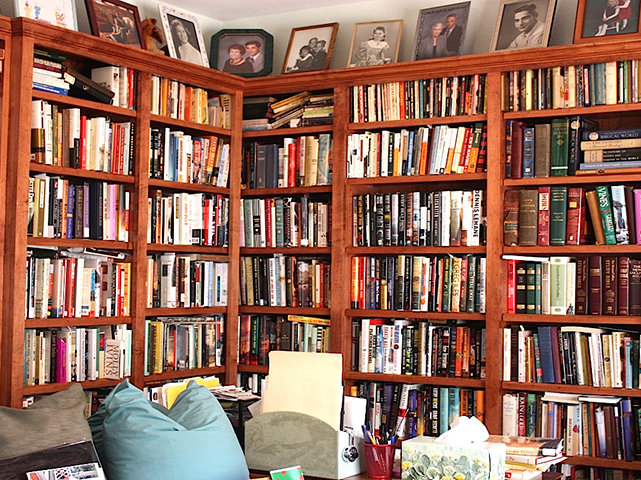 A living room of books.

On March 5, I received an email addressed to my used book business that said: “Hello, I have to move out more than 3000 books from my dad’s collection.” The books were at her parents’ home in a nearby suburb. Her father had taught literature at a local university. Such a mild beginning began one of the greatest mental pleasures I’ve ever enjoyed.

She’d gone on to say, “I’ve very casually looked thru his books and found scattered first editions of a couple of Ernest Hemingway, Aldous Huxley, Dos Passos – nothing super old that is well known to me.  He has some old books (1890, 1910) by British authors I don’t know. They are organized by his courses rather than alphabetically or by date. Are you someone interested in these types of older books, and if not, could you recommend anyone?”

I was just getting over a bad stomach virus and felt really lousy, but when opportunity knocks, one must get up and answer the door. I made arrangements to come over to see the books, making no promises, but hoping to find a few nuggets while fearing I might once again lapse into my typically suicidal tender-heartedness and agree to take 3,000 books off someone’s hands.

People who read this column probably would love to have 3,000 more books added to their personal libraries, even if they had to toss their children’s toys, furniture and blankets, and possibly the children themselves, to make room for these books. (Which would probably never be read, but who cares? The ownership of books has no limits. Bibliomania rules!)

Except when you’re in the old ’n’ rare book business. Here’s what I was thinking when I read that email: Professors are brainy, quirky people with wide-ranging minds. They are expected to know everything, and they try to do just that. Inevitably, they have large libraries.

From a bookseller’s point of view, however, professors’ libraries seldom contain old and rare books. Professors are unjustifiably underpaid and when they buy the tools of their trade – books – they know how to find them cheap. They do not mind paperbacks, or 10th editions, nor do they buy for investment. They have the quaint, old-fashioned view that books are for reading and think content is more important than binding. Except for the odd volume picked up in their travels, they don’t tend to have many books of exceptional monetary value on their shelves.

This fact is especially true of professors of literature. In general, in the used-book world, literature, especially poetry and short stories, but most novels also, is extremely hard to sell. “Fiction” sells, e.g., vampires, fairies, fangs, sex, fantasy, romance, murder, crime, espionage, thuggery, etc.), but “Literature,” e.g., classics, foreign authors in translation, high-concept novels, poetry – anything honest and intelligent that illustrates truths about life) does not. Not in the used-book world. Unless it’s priced at 50 cents or less.

But I drove out to see the books the next day with butterflies in my stomach anyway, feeling the same old thrill of the hunt. Maybe, just maybe, this might be the big hit, the Treasure of the Sierra Madre, that great big bunch of books I might lust to own and want to keep for myself despite the fact that that would be like being a baker who eats his own cupcakes, or, worse, a bartender who drinks.

I pulled up to the curb. A very nice suburban neighborhood. A quietly beautiful house. Who knows? I knocked and was welcomed in by the middle-aged, pleasant husband of the woman who’d written me. She wouldn’t be there today. He and I talked pleasantries for a few minutes as a crew of helpers walked in and out carrying things. I learned that the professor himself had died more than 10 years ago. His widow was moving to live nearer her daughter. Ideally, as far as the books were concerned, the family hoped I’d buy them all and remove them.

I asked for a tour of the house to see every room that held books. We worked our way through several first-floor rooms, did the same on the second floor and up to the third, which was more like a converted attic. There really were a lot of books.

“What do you think?” the husband asked me.

I began a speech I’ve said many times, “I can see the professor loved books and had great taste, but I can also tell you, just by looking at them, that this is a “reader’s” library and not a “collector’s” library. This is not the library of a man who bought rare books for prestige or as an investment. This is the working library of a reader and scholar who taught courses and wrote about literature. It has hardly any monetary value beyond what a thrift store might charge.”

He said he suspected as much. He said he was prepared to haul them to a charity-run bookstore and take a tax donation. I told him I’d nonetheless like to go through the books and look for any nuggets the casual eye might not see. I’d put them aside, perhaps build a pile of them, and offer to buy them. He agreed. I started on the third floor and finished downstairs three hours later. And boy, did I have fun! I can’t begin to tell you how exciting it is to be the only person in a library, left alone to search through the dusty, neglected shelves for something that might escape the notice of an untrained eye. Something I might be able to buy and take away with me. “Book lust” we call it in the trade.

Quite a few surprises were in store for me that day. And not all of them were on the shelves! Including the discovery that someone had recommended me not just to “find the nuggets,” but also to do another, more exciting, job. An “assignment,” you might say. A “TOP SECRET” one.

Hugh Gilmore is the author of some “Literature” and non-fiction books available most easily through Amazon Books in both print and Kindle formats.