A stone chimney and a portion of the Buttercup Cottage still stand along Cresheim Valley Drive between Chestnut Hill and Mt. Airy. (Photo by Pete Mazzaccaro) by Lucy Curtis The stone shell of a barn … 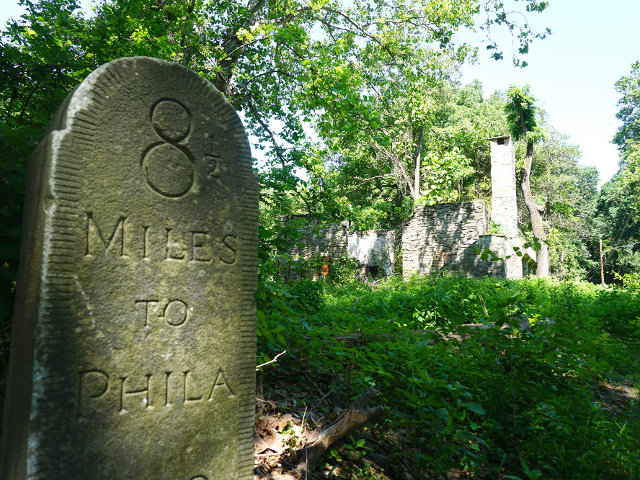 A stone chimney and a portion of the Buttercup Cottage still stand along Cresheim Valley Drive between Chestnut Hill and Mt. Airy. (Photo by Pete Mazzaccaro)

The stone shell of a barn stands overgrown and weathered along Cresheim Valley Drive. Its stone walls and chimney are close to being swallowed by the surrounding greenery. This structure is all that’s left of what was once the Buttercup Cottage, a summer home opened in 1889 where so-called working girls – those who could not afford a vacation – could spend several weeks exploring and relaxing in nature.

The Cottage itself was most likely built as a residence in the early nineteenth century, however, it was later converted into a summer home. At the time Buttercup Cottage was founded, rapid urban growth and industrialization were taking place in Philadelphia, and these changes caused both social and cultural disturbances. Many medical and spiritual authorities cited finding an escape in nature as a way to cure this unrest in response to urbanization.

Chestnut Hill, as the highest point in Philadelphia, was known for its fresh air and below-average summer temperatures. As an ideal vacation spot, Chestnut Hill was also the perfect location for hardworking young girls to take a break from their tiring jobs in the big city.

Henry Howard Houston, a businessman and philanthropist who built the Wissahickon Inn and St. Martin’s Church, bought the house and grounds that were to become Buttercup Cottage. Houston made his daughter, Gertrude Houston (who later became Gertrude Houston Woodward), the first board president of the Cottage.

The board of Buttercup Cottage was all women, which was highly unusual at the time. Houston allowed the Buttercup program to use the house rent-free so that working girls, who may not have been able to afford other summer homes, could stay there.

For the price of $1 a week, girls could spend time in the fresh air and get away from the stress of their jobs. Buttercup Cottage was open to girls who were above the age of 16 and couldn’t afford to stay in another summer home.

St. Martin’s was very involved in the Cottage, as all members of the staff were members of the church. Because of this close relationship, which was spiritual as well as financial, boarders were required to attend mass on Sundays. Besides church, however, they were free to do whatever they pleased. On the land around the Cottage there was a playground, an apple orchard and a pasture for a cow, as well as various streams and pools ripe for exploring.

The house itself, though called a cottage, was well-sized and easily accommodated up to 25 girls, as well as staff. The ground floor had a living room with a large fireplace, a dining room, a kitchen, a pantry and a laundry room. The second and third floors had eight bedrooms each, making a total of 16 rooms.

One of the women instrumental to the Buttercup program was Sister Ruth, a devoted member of St. Martin’s and a key founder of the Cottage. She had charge of the program for 18 years, but after she left, the program only lasted a few more summers.

The last year any stories about the Buttercup Cottage appeared in any local papers was 1911. The program had received generous coverage from local papers before that, but after that summer, the stories simply stopped. It remains unclear how or why the program was discontinued, and after the summer of 1911, the Cottage stood unused for many seasons.

In 1964, Fairmount Park was deeded the property by the Woodward Estate. The three-story, wood-framed house was torn down, but the barn was left standing and was used by Girl Scouts as well as other programs for various events. As the years passed the barn gradually stopped being used, and in April, 1982, it was burned down by vandals.

Now the stone structure recedes into the trees along Cresheim Valley Drive and is passed every day by hundreds of people unaware of the little piece of history that they go by as they drive down the street.

Thanks to the Chestnut Hill Historical Society for access to its archives, which were used to research this story.

Donate now to CH Local
The Latest
Crime Report: November 22-29, 2021
The following crime report is for crimes reported in Chestnut Hill and Mt. Airy for the two-week period between November 22 and 29, 2021.

Germantown residents bring music into Philadelphia Schools
Musicopia has now served about 360,000 students, including some in northwest Philadelphia.
Letter: Firefighters earn praise for response to fatal blaze
On Saturday evening, November 13, a fire broke out at a West Mount Airy home on Mt Airy Avenue. We who live nearby are heartbroken by this tragic event that gutted the home and killed two of its …
Breakthrough of Greater Philadelphia is now part of Germantown Friends School
While Breakthrough has been operating out of the GFS campus for 27 years, it is now an official part of the 175 year-old school.
GFS student earns all-state soccer honors
The Germantown Friends School varsity girls soccer team wrapped up a successful season last month, capturing the Friends Schools League title and advancing to the PAISAA State Tournament. Margaret Harvey ‘23 earned All-State Soccer Honors.