Creating a thriving ‘Nest’ in Mt. Airy and elsewhere

Co-owners of The Nesting House in West Mt. Airy are Jennifer Kinka (left) and Meredith Jacoby, who is holding her daughter, Sylvia. (Photo by Pamela Rogow from 2012; Sylvia is now 3 and a …

Creating a thriving ‘Nest’ in Mt. Airy and elsewhere 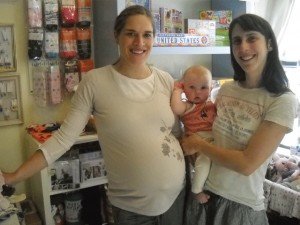 Co-owners of The Nesting House in West Mt. Airy are Jennifer Kinka (left) and Meredith Jacoby, who is holding her daughter, Sylvia. (Photo by Pamela Rogow from 2012; Sylvia is now 3 and a half.)[/caption]

Back in 2010, two local stay-at-home moms wanted to experiment. Somewhat under-stimulated at home, they decided they were going to start a high-quality second-hand children's clothing store.

“I was looking for something for my brain to chew on,” said Kinka, who had worked as a high school physics and math teacher in Delaware County for five years before leaving to raise her children.

Their vision was that if they sold high-quality clothing at a good price — most products in the store range from $3 to $10, and from sizes zero to 8 — they could create a two-sided impact. First, there would always be a supply of high-quality clothing at the store, and second, because the clothes are second-hand, the sustainably minded moms could help contribute to recycling and reducing trash in landfills.

So they called up friends, announced they were opening a store, and asked for donations. Friends sent help, and in June 2010 the store opened. Almost immediately, Kinka and Jacoby were “blindsided by the response,” Kinka said.

Within in a few months, they were making profits. Eventually, Jacoby moved to Vermont, and Kinka's husband Christopher left his job teaching in Philadelphia public schools and joined the Nesting House team.

Flash-forward two-and-a-half years, to mid-2012; the Kinkas decided they were going to expand. Being the modern, eco- and community-minded couple they were, like so many others in Mt. Airy, they posed the question on social media: Where should we go next?

Kinka figured that would garner a few responses. They received over 1,000. Eventually, in July of 2013, The Nesting House opened its second location in Collingswood, NJ, which is twice the size of the Mt. Airy location, and it was soon profitable.

Now, they're expanding again. This summer the Kinkas, who've lived in Mt. Airy five years and for seven years in Germantown before that, are poised to open a third Nesting House. This time in West Philly at 4501 Baltimore Ave.

Raised in a small farm town in Western Pennsylvania, Kinka came to Philadelphia to study education at LaSalle University ('01). “The best part about it is all the creativity,” she said about running the stores. When she wants to make a design change, she doesn't have to go through anyone else.

And, at each store, the Kinkas are building community, not just by providing quality second-hand children's clothes but also by hosting classes each week. Once a week at each store there is a mothers’ support group. In Collingswood, there are Spanish classes for toddlers.

Yet, there is another family aspect of all this that drives home for Kinka, a mother of three: Shea, Sam and Nora. Before even thinking about opening a store, she lost both of her parents to illnesses. When they passed, they left her a small amount of money.

“When I got that little check in the mail,” Kinka remembers, “I was like, if I put this in my bank account, I'm just gonna spend it on groceries.” Nesting House then “kind of came out of that desire to do something positive for the community.”

A community of like-minded people, the type of folks who “are looking for real answers in life … like what's really in my food,” is the reason she and Christopher, 38, first moved to Germantown. In the Northwest, Jen Kinka has found, she's not alone in being a mother without parents close by. So many people who live there are transplants.

“I feel like we've patched together a community for all these people who are living in a different place than where they were raised,” she said. Plus, with Nesting House, she's always close to a fresh change of clothes for her children.