“You’re nothing but a pack of cards!” says Alice in “Alice in Wonderland,” which took Santore three years to illustrate. Thomas Hine, Philadelphia Inquirer art critic, wrote in March of … 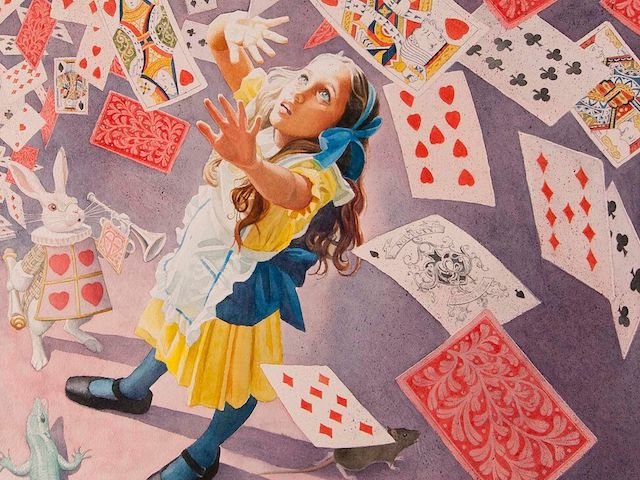 “You’re nothing but a pack of cards!” says Alice in “Alice in Wonderland,” which took Santore three years to illustrate. Thomas Hine, Philadelphia Inquirer art critic, wrote in March of this year, “In his children’s books, Santore seems preoccupied with de-Disneying the imagery of childhood literature.”[/caption]

If you subscribed to TV Guide in the 1970s and ‘80s, long before the internet, when it was the only way you could possibly have a schedule of all the following week’s TV shows, then you almost certainly saw the brilliant illustrations on the magazine’s covers of the era’s top TV stars.

Many of those covers were created by the magical Charles Santore, now 83, whose work is currently being featured in “Charles Santore: Fifty Years of Art and Storytelling,” at the Woodmere Art Museum through May 13. It is the first-ever retrospective of his work.

The exhibit traces the development of the internationally renowned illustrator from his commercial work of the 1960s to his most recent children’s book, “Alice’s Adventures in Wonderland” (2017). The exhibition includes illustrations for “The Wizard of Oz,” “Paul Revere’s Ride,” “A Stowaway on Noah’s Ark,” “Snow White” and other books, together with theater posters, album covers and Santore’s iconic celebrity portraits made for TV Guide.

“I’ve only had a few shows of my work,” Santore told us in a recent interview, “at Brandywine Museum and Stockton College, for example. I am not familiar with museum people. After I graduated from art school, I walked around with my portfolio trying to get work.

“I walked into the office of the Saturday Evening Post and showed the art director my work. They had a question-and-answer feature in the magazine, and they let me do an illustration for that. Unfortunately, shortly after that they went out of business.”

Born in South Philadelphia and now living in Fitler Square, Santore graduated from the Philadelphia Museum School of Art (now the University of the Arts) in 1956, then served in the Army and then returned to Philadelphia to work in a small art studio. His first editorial assignment was the one previously mentioned for the Saturday Evening Post. 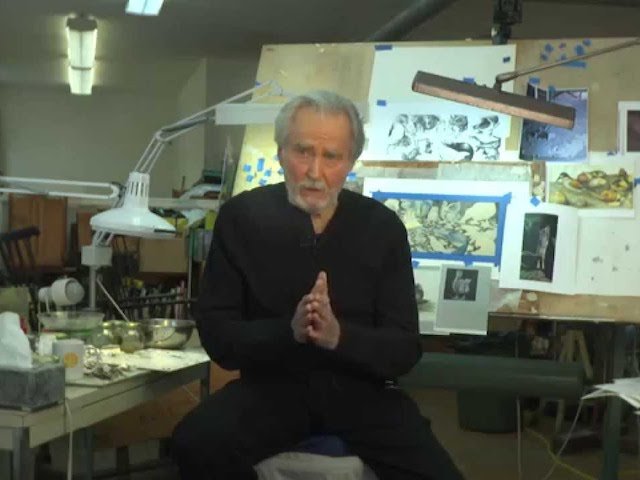 Although he is now 83, Santore told us that “the work is not harder at my age.”[/caption]

After that brief experience, he was able to secure freelance advertising illustration work for advertising agencies and magazines, including TV Guide, Time, Life, Redbook, Ladies Home Journal, Esquire, Cosmopolitan, National Geographic, etc. In 1985 Santore was approached by Running Press to illustrate a new version of "Tales of Peter Rabbit" by Beatrix Potter. “It was a life changing experience,” he said. Since 1986 Santore has worked solely as a children’s book illustrator, becoming one of the most respected and acclaimed illustrators in the country.

He is the recipient of numerous awards, including the Society of Illustrators Award of Excellence and the Hamilton King Award. His work is in the permanent collections of New York City’s Museum of Modern Art, the Brandywine River Museum of Art, the Free Library of Philadelphia, the U.S. Department of the Interior and many private collections.

Thomas Hine, Philadelphia Inquirer art critic, wrote in March of this year, “In his children’s books, Santore seems preoccupied with de-Disneying the imagery of childhood literature. Though his style is detailed and maximalist, like the Disney animators, he eschews the cute. His pictures are often filled with animals that appear to be zoologically accurate depictions, even when, as with Oz’s flying monkeys, we know they’re not. Even Snow White’s dwarfs, an unattractive lot, were drawn from life. Santore is really at his best with animals. His wonderful picture of the tortoise crossing the finish line in the famous race shows a menagerie in attendance … ”

Santore created 25 covers for TV Guide, 19 of which are in the Woodmere exhibit. He has painted in many mediums — pastel, charcoal, oil, watercolors, etc. “The medium does not matter,” he said. “The subject matter dictates the medium. I tend to do watercolors for children’s books. I just keep working. 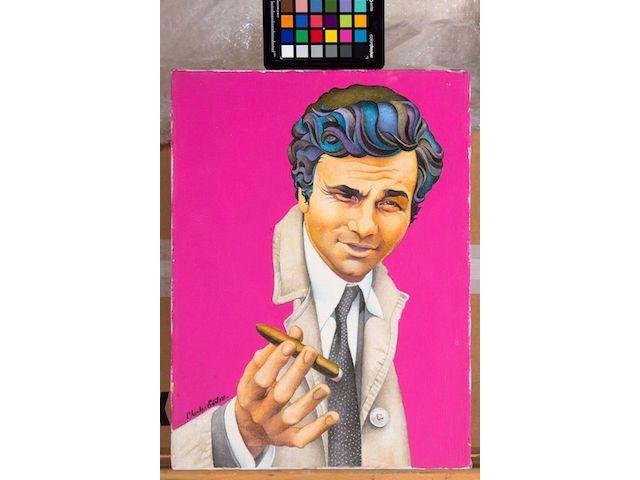 This is one of Santore’s many TV Guide cover illustrations now on display at Woodmere. This one from 1972 is of Peter Falk, star of the hit detective show, “Columbo.”[/caption]

It has usually taken about two years for Santore to do a book, but it took three years for both “Alice in Wonderland” and “The Wizard of Oz,” which are both 90-page books. Usually there are only 32 pages. The complexity of the story determines the number of pages. There are 62 illustrations in “Wizard” and 41 in “Alice.” Both also have two-page foldouts. “It’s very complicated,” Santore said. “Part of the enjoyment is to make a statement and know what I am talking about.

“It can be superficial to do one assignment; I may not care about the subject, such as golf or sailboats, but with a book you absolutely have to be really interested in the subject and do research and learn something. It changes you as an artist. You know more about yourself as an artist when you finish.”

Is the work harder now that Santore is 83? “I don’t think it is harder at my age. Deadlines were worse years ago. Books are longer, so you can work at your own leisure. I sign a contract to produce the work by a certain date, but that may be flexible. If you have a good relationship with the editor, you can probably stretch it. When I first went from the short deadlines to a book commitment, that was scary. For a year or two, you cannot accept any other work, but it has paid off.”