Could friends cut their wrists to become 'blood sisters?'

Janet (left) and her best friend, Ellie, were inseparable in 1952. by Janet Gilmore When I was little, I looked at all kinds of things and wondered. “Mom, what's that ring?” “It’s my wedding …

Could friends cut their wrists to become 'blood sisters?' 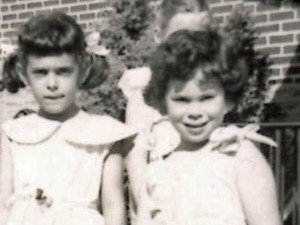 Janet (left) and her best friend, Ellie, were inseparable in 1952.

When I was little, I looked at all kinds of things and wondered.

“What does that mean?”

“Daddy gave it to me on our wedding day, and I gave one to him. It means we’re married. We belong to each other.”

Hmmm. Thanks to the big post-war chromosomal lottery, I belonged to both of them. They owned me in the sense that they were in charge of food versus no food, TV versus no TV, tucking me in at night versus leaving me outside for the coyotes. Every time I was about to do something I thought screamingly funny, they could stop me.

My pal Ellie lived two doors down. She belonged to her parents, too, but we were best friends and had each other. We had little sisters, too, but as long as we had each other, we could ignore them.

We sat on the front steps and had contests:

She got me. I looked at her and opened my mouth to say something but couldn’t think of anything, so we laughed instead. There was no consequence for winning or for losing. That’s why we were friends.

We believed in the World Book Encyclopedia, in television and in the Ten Commandments in those days. And we were eager to try new things. We spent hours trying to twirl a lasso like everyone on TV and tried to type the entire text of “Little Women” so we could say we wrote a book but realized how impossible that was by page two.

Then I saw two boys on television cut their wrists, hold the cuts together, bleed into each other and become blood brothers forever. It was 1952.

We got a sharp knife and went into the driveway, where life happened on our block. I held the knife at my wrist. She watched and waited. And waited.

“I have an idea!” she said. “Do you have any mosquito bites?”

Of course. I had many.

“Let’s scratch our mosquito bites until they bleed, then hold them together. Then we can be blood sisters.”

I could do that. Was it cheating or not? We considered, then started scratching. Holding her arm to my leg, we bled into each other. A little. Maybe we were cowards; at least we were blood cowards.

Months later, I saw two girls on TV became “Friendship Sisters” by exchanging rings and promising to wear them forever. That’s what Ellie and I should do!

A ring would make me belong to someone other than my parents of my own free will.

We walked to Woolworth's on Ogontz Avenue the following Saturday afternoon to look for rings. The silver bands were $1.29. I had that much with me, and I assumed Ellie did, too. We chose two shining matching rings.

“We can just put them in our pockets and walk out,” said Ellie.

I was a Ten Commandment prig. I shalt not steal.

I gave Ellie my most soulful look.

After we paid, we walked a few blocks from Woolworth’s and put on our rings. I was very happy; I think Ellie was, too. The ring shone on my finger, like my parents’ did. Someone chose me, even though her morals were a little doubtful.

I wore my ring all the time. My parents were happy that Ellie and I were friends. They thought she was a good influence on me.

Bliss. I told all the girls at school: “Oh, my ring? Yes, my 'friendship sister' gave it to me. She’s my best friend.”

The anvil fell on the way to school one day.

How could anyone leave Tulpehocken Street? It was unthinkable.

“My parents want to move, and I gotta go with them,” she said and told me an address that I didn’t hear. It was only a few miles away but could have been on another planet. It was somewhere else.

I wouldn’t go to sleep any more knowing that my friendship sister was sleeping just two houses away at the same time. She would make new friends in her new neighborhood. Perhaps a girl who had the courage to cut her wrist to be a real blood sister, not a scaredy-cat like me who suggested scratching mosquito bites to draw blood.

At age 12, I realized for the first time that I had something important to lose, and I was about to lose it.

That night with a deep, ragged sigh, I took my ring off and put it in my drawer.