Philadelphia is one of at least 904 cities around the world to have a credit-card-based bicycle-sharing program. by Si Affron In 2005, Lyon, France, adopted a bike-sharing model that, one decade … 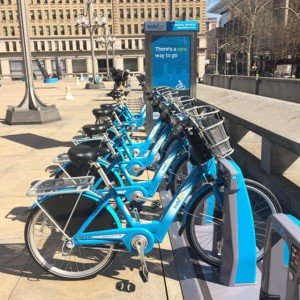 Philadelphia is one of at least 904 cities around the world to have a credit-card-based bicycle-sharing program.

In 2005, Lyon, France, adopted a bike-sharing model that, one decade later, has become ubiquitous in the modern city. Ten years later, perhaps a little bit behind the trend, Philadelphia instituted its own version, Indego, and became one of at least 904 cities around the world to have a credit-card-based bicycle-sharing program.

Phase One of Philadelphia’s Indego plan was launched on April 23, 2015, with 70 stations and 700 bikes. Though most heavily present in the Center City area, the stations currently stretch from Temple in the north to the Point Breeze neighborhood of South Philadelphia, and from the Delaware River in the east to 44th and Walnut streets in the west.

Northwest Philadelphia obviously does not fall within those boundaries.

But Indego’s Phase Two is scheduled to roll out in April 2016, and while its plans have not been established, the introduction of approximately 60 new stations and 1,100 new bikes prompts the possibility of Indego’s domain expanding.

Russell Meddin, founder of Bike Share Philadelphia, said Northwest Philadelphia was a good candidate for bike sharing, but that there are not enough planned racks for the entire city to receive bikes.

“If a community really wants to have public-use bicycles, they should let the city know that as strongly as possible,” he said.

Meddin recommends reaching out to city officials, such as Councilwoman Cindy Bass, to encourage Indego to serve the neighborhood.

The 2015 launch was seven years in the making, the same amount of time that Meddin, who advises cities worldwide on similar programs, said he had been active in prodding Philadelphia to institute Indego. The final solution, however, was not as grand as the original proposition.

“Originally, the program was to be citywide,” he said. “But the feasibility plan narrowed that scope, and the business plan narrowed it even further.”

The shortcomings of Phase One will be improved in Phase Two, although it is not clear yet exactly how.

The National Association of City Transportation Officials released a definitive study, saying that approximately 28 stations a square mile was optimal, and Indego currently falls well short of that, so perhaps increased density will be a focus of the 2016 improvement.

But a larger reach is also in the works, and Meddin cited East Falls and Manayunk as neighborhoods that have expressed an interest in receiving stations.

Bike racks heading to neighborhoods in Northwest Philadelphia would be a promising sign for Chestnut Hill, since bikes cannot reach the far Northwest unless a network reaching back into the city is established.

Denise Goren, director of policy and planning with the Mayor’s Office of Transportation and Utilities described the system as “a complex network.”

She explained that racks can’t be isolated because if they were filled with bikes, there would be no convenient alternate location for a user to return one.

There is currently no Phase Three in the works. But with cities like Paris and New York adding hundreds of stations at once and establishing networks 10 times as large as Indego, the precedent to expand further exists.

By Fall 2015, Philadelphians should have a better idea of what Indego’s future might hold.