Computer geek has browsers lining up to see him sing

Keith Spencer starred in “Ol’ Man River” in July of 2013 at the Bristol Riverside Theatre in lower Bucks County.[/caption] by Len Lear Keith Spencer’s family lived on Schoolhouse Lane in …

Computer geek has browsers lining up to see him sing 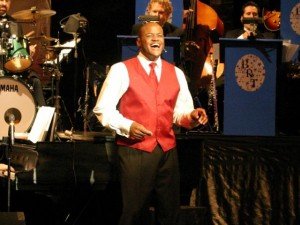 Keith Spencer starred in “Ol’ Man River” in July of 2013 at the Bristol Riverside Theatre in lower Bucks County.[/caption]

Keith Spencer’s family lived on Schoolhouse Lane in Germantown when he was born, but they moved to Dresher when he was a child. After graduating from Upper Dublin High School and then Penn State with a degree in Marketing and minor in Psychology, Keith moved to Florida but then came back to Philly and actually purchased his childhood home, where he still lives. “I have a rare opportunity to raise my own family within the same walls where I grew up,” he said last week.

When Keith was a sophomore at Upper Dublin, he was playing second trombone in the jazz band, and during one rehearsal, the director called him out from the section and asked if he knew the song "Memory" from “Cats.” He shrugged and responded, "Sure, I think so. We sang it last year in choir."

“Suddenly, I'm center stage for my impromptu audition, and I start in,” he recalled. “Halfway through the song, though, the director abruptly brings the band to a halt and asks me, in not so polite language, ‘What the heck are you singing?’ I stared at him wide-eyed, not knowing what he was talking about. Well, it seems that I did know the song but only the bass harmony part, which was nowhere near the song's actual melody.

“We figured it out, and next thing I knew, I was debuting at the annual Chamber of Commerce concert that year. So, center stage in front of a wailing jazz band, knock-kneed, profusely sweating and ready to pass out, I sang my song into the dark void of the faceless people behind the bright stage lights. And then came the applause. Humbly, I'll say that I was hooked and never looked back!”

Keith knew then that he had to be a performer for the rest of his life. However, unlike some dreamers who do not have a plan B, Keith knew that making a living and raising a family, unless you achieve major stardom, is about as difficult as Sisyphus pushing that huge boulder up a mountain side. So Keith has also pursued a “sensible” day job to pay the bills while singing at night.

Thus, for more than 20 years he has worked in the information technology industry. He currently works for TEKsystems Global Services, a consulting company that specializes in IT staffing and services. “Forgive the geek talk,” he said, “but I manage the Enterprise Applications and Analytics Division and have responsibility for global delivery. Which really means that I carry every gadget that you'd ever need to power or connect any device during travel.”

For a man with a career in the computer industry, Keith has been extraordinarily successful and busy as a singer (baritone) and concert performer. He does not “byte” off more than he can chew. Among other stage successes, he has sung in the Broadway tour of Andrew Lloyd Webber's “Music of the Night” with Betty Buckley and Melissa Manchester. Some of his favorite roles include Coalhouse Walker, Jr. (“Ragtime”); Joe (“Show Boat”); Leading Player (“Pippin”); Sky Masterson (“Guys and Dolls”); Billy (“Carousel”), Audrey II (“The Little Shop of Horrors”) and many others.

Outside the theatrical stage, Spencer has sung concert back-up vocals for artists such as Roberta Flack, Rosemary Clooney and Sandi Patty. Other credits include the award of semi-finalist in the esteemed American Traditions Competition in Savannah, Georgia, and featured soloist with Walt Disney World's premier a cappella ensemble, Voices of Liberty. He has done one-man show performances in a Nat “King” Cole tribute and most recently, “Ol’ Man River: A Tribute to the African-American Leading Men of Broadway.”

“I've been really blessed,” Keith said last week, “to have an active performance life as well as one in the corporate world. Realistically, my responsibilities to family and the corporate world mandate that I have to make hard choices that impact my ability to perform and limit the nature of full stage shows I can do.”

What is the hardest thing Keith ever had to do in his stage career? “I can remember one show where I was given less than a week to memorize a one-man straight play. It was a good opportunity, so I took up the challenge. It meant that that week, I didn't sleep, and my girlfriend at the time just threw me cues 24/7. I was performing by Pavlovian response.

“It was so crazy that honestly, for the opening of the run, I didn't fully know the show in order. I had a bunch of jumbled scenes in my head. I would come off stage after one scene, and someone backstage would need to give me the opening line of the next scene before I went back on. It was crazy. Things got better, but it was harrowing.”

Keith lives in Dresher with his wife, Amy, and children Penelope, 5, and twins, Zachary and Vivian, who are 2-1/2.