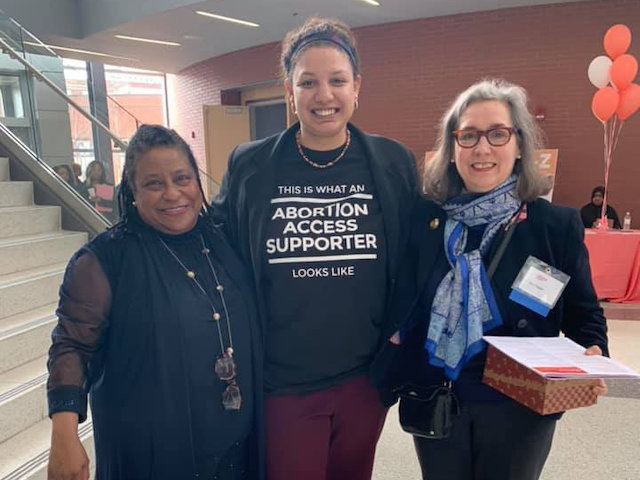 The Philadelphia Commission for Women held its 3rd Annual Summit for Women and Girls at La Salle University on Friday, March 15. The commission was created by an amendment to the Philadelphia Home Rule Charter, initiated by Councilwoman Blondell Reynolds Brown and passed by the voters in 2015.

The commission is comprised of 10 people appointed by the mayor and 17 appointed by each member of City Council. Its missions is to make recommendations that advance gender equality to the mayor, City Council and public policy makers.

Organized around the theme, “Our Voices … Our Power,” the summit included sessions on health and wellness, financial literacy, self-esteem and leadership development. The first plenary session was well-received by a largely young and enthusiastic audience with speakers LaTosha Brown of the Black Voters Matter Fund, Gisele Baretto Fetterman, Pennsylvania’s Second Lady, and Rep. Elizabeth Fiedle of Pennsylvania’s 184th District.

Fetterman’s description of growing up as an undocumented immigrant was particularly moving. She was told by her mother not to draw attention to herself, to be as invisible as possible – in sharp contrast to LaTosha Brown’s and Elizabeth Fiedler’s message to the young girls in the audience to raise their voices and aim high.

A major theme of the conference was the shocking racial disparity in maternal and infant mortality, an issue that the Philadelphia Commission for Women has worked to bring to the attention of policy makers and the general public. In a breakout session, “The Reality of Maternal Mortality,” Rep. Morgan Cephas,(192nd District) said the state’s health care system was not meeting the needs of women of color, noting that the high proportion of African-American maternal and infant deaths cuts across socioeconomic lines. Philadelphia’s 8th District Councilperson Cindy Bass has introduced a resolution to hold hearings on this issue at Philadelphia City Council.

In another breakout session, Feminista Jones, author of “Reclaiming Our Space: How Black Feminists are Changing the World from Tweets to the Streets,” also drew attention to racial disparities in infant and maternal deaths as one of the many reasons black women have every right to be angry.

Despite persistent problems, however, many speakers also emphasized there was much to celebrate, with more women serving in elected office than ever before and, as the session “Never Too Young to Break Barriers” demonstrated, young women have become leaders in sports, education and community service.

The Summit concluded with an inspirational speech from City Councilperson Blondell Reynolds Brown, who will be retiring at the end of her term. She emphasized that “women who lead must make it a practice to mentor at least one promising one young woman they can coach and prepare to accept the torch.”

From the executive director of the Philadelphia Commission for Women, Jovida Hill: “It’s gratifying to be able to provide a platform for the city’s women and girls in an environment of encouragement, enlightenment and empowerment. We broke our own record this year, with more than 100 girls from schools and mentoring programs across the city. That the summit grows with each year tells us that there is a thirst for this opportunity for women and girls to come together to uplift one another.”

BenePhilly helps city residents get the services, aid they need