Joe Van Schrijver, drives a 1909 Hupmobile across the Willow Grove Avenue Bridge. The new bridge, which reopened to traffic earlier this year, was celebrated in an event last Wednesday, May 25. … 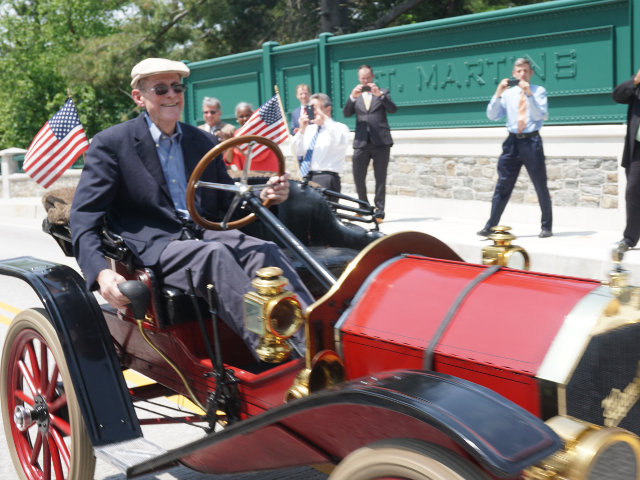 Joe Van Schrijver, drives a 1909 Hupmobile across the Willow Grove Avenue Bridge. The new bridge, which reopened to traffic earlier this year, was celebrated in an event last Wednesday, May 25. (Photo by Eric Dolente)

After more than a year of closure, the Willow Grove Avenue Bridge that crosses the Chestnut Hill West commuter line reopened Wednesday, May 25.

A group of city and local officials gathered to mark the bridge opening, which was heralded as the product of a successful collaboration between the city and local residents.

The city announced its intentions to close the 122-year-old Willow Grove Avenue Bridge in January of 2015, estimating that the replacement would cost $3.2 million.

Carroll noted the age of the original bridge in his remarks.

“We hope we won’t have to wait another 120 years to get it rehabbed next time, but this bridge was built to last,” he said.

After about a year of construction by the Streets Department with open communications with SEPTA, the Willow Grove Avenue Bridge was finished.

The new bridge – a three-span structure – was completed using 76,000 pounds of structural steel, 1,000 cubic yards of concrete and 100,000 pounds of reinforced steel. It was finished with stone veneer parapets and decorative protective barriers, leaving it both structurally sound and pleasing to the eye.

DiBerardinis described the bridge as “a fine example of how government … can work closely with community and come out with important initiatives and infrastructure investment to improve the quality of our city.”

“The culture and climate of 10,000 residents here are very important in how we operate, and how the community looks is very important,” said Rosenbaum.

Kerbel blessed the bridge with holy water and a prayer.

“I’m thankful that we had been blessed,” said Tolson,“for the future use and travels [of the Willow Grove Avenue Bridge] by your children, grandchildren, great grandchildren and many who will come.”

Following these remarks, an antique car was driven across the bridge to complete the ceremony.