Lillian DiPiazza shines as the Sugar Plum Fairy in the Pennsylvania Ballet's performance of "The Nutcracker." (Photo by Erin Baiano) by Michael Caruso Chestnut Hill music lovers will have the … 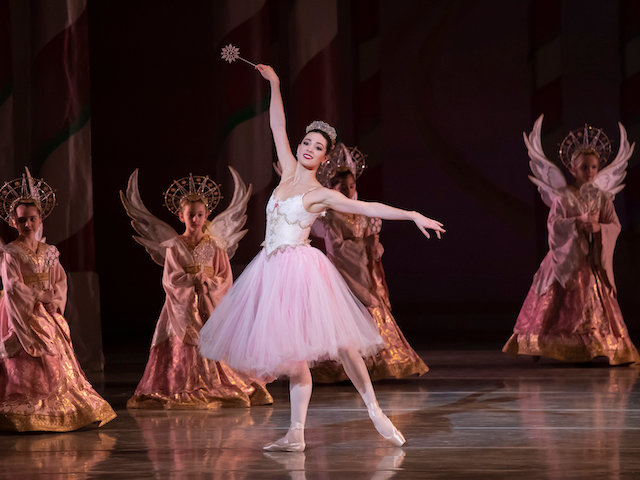 Lillian DiPiazza shines as the Sugar Plum Fairy in the Pennsylvania Ballet's performance of "The Nutcracker." (Photo by Erin Baiano)

Donald Nally and The Crossing will present “The Crossing @ Christmas” Sunday, Dec. 16, at 5 p.m. in the Presbyterian Church of Chestnut Hill. The program includes several movements from Gavin Bryars’ “A native hill” along with works by Weir, Hill and Metcalf. More details at crossingchoir.com

Local music lovers can be sure that the Christmas season is upon us once they’ve seen and heard performances of Tchaikovsky’s “The Nutcracker” and Handel’s “Messiah.” I had the lucky opportunity to do just that two days running last week.

I saw opening night of Pennsylvania Ballet’s production of “The Nutcracker” Friday, Dec. 7, in a jam-packed Academy of Music. Then I heard the Philadelphia Orchestra’s rendition of “Messiah” on Saturday, Dec. 8, in an equally packed Verizon Hall. Both interpretations were stellar and marked both the Ballet and the Orchestra as the region’s leading performing arts ensembles. 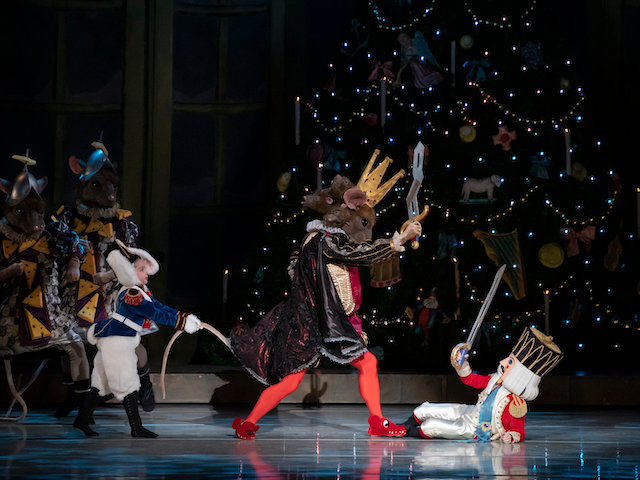 The Nutcracker's epic battle with the Mouse King is just one of many highlights of the PA Ballet's performance. (Photo by Erin Baiano)

Pennsylvania Ballet is one of the few companies in the world permitted to perform George Balanchine’s choreography of Tchaikovsky’s most celebrated score in “The Nutcracker.” New York City Ballet premiered it Feb. 2, 1954, and it has remained an audience favorite ever since. It tells the tale of Marie’s Christmas gift of a nutcracker and the dream of its epic battle with the Mouse King followed by a trip to the Land of the Sweets and all the wonders Marie and the nutcracker, now turned into a prince, experience while there.

Ava DiEmedio danced the part of Marie on opening night with style, elegance, emotion and spunk. Rowan Duffy was naughty yet engaging as her young brother, Fritz. Charles Askegard was a menacing yet winning Herr Drosselmeier, who brings the magical nutcracker to the family’s Christmas party, and Liam Agnew was his nephew, transformed from the nutcracker into a prince with nary a bump.

It’s the second act of “Nutcracker” that offers Balanchine’s most memorable dancing, and it was here that Friday evening’s audience had the chance to see how well artistic director Angel Corella’s company is currently dancing.

Lillian DiPiazza was an exquisite Sugar Plum Fairy. All her moves sparkled like a string of flawless diamonds, all her gestures glowed with fantastic expressivity, and her point work was unshakably secure. Ian Hussey was her Cavalier: technically as solid as Gibraltar and supportive as the perfect consort.

Mayara Pineiro was an eloquent Dewdrop. Roxborough’s Oksana Maslova was a seductive Arabian dancer in “Coffee,” Zecheng Liang was an explosive Chinese dancer in “Tea,” Jermel Johnson was an exuberant and elastic leader of the Candy Canes, and Daysei Torriente and Arian Molina Soca invested their dancing in “Hot Chocolate” with a potent dash of Spanish flair.

Beatrice Jona Affron led the Ballet Orchestra’s performance of this most perfect of all ballet scores with style and sensitivity. Sets, costumes and lighting all came together to produce an electrifying and satisfying evening in the theater. “The Nutcracker” continues in the Academy of Music through Dec. 31. Visit paballet.org for ticket information.

"The Nutcracker" will be running at the Academy of Music through Dec. 31. (Photo by Erin Baiano)

Fresh from his triumphant debut as the Metropolitan Opera’s music director and Tuesday’s opening of Verdi’s “La Traviata,” Yannick Nezet-Seguin brought all of his operatic and instrumental expertise to performances of Handel’s “Messiah” Dec. 6, 8 & 9. With four exemplary vocal soloists and the formidable Westminster Symphonic Choir joining the Philadelphia Orchestra, Nezet-Seguin proved that “Messiah” is truly the greatest of all works of sacred choral music and that Yannick ranks among not only its finest interpreters but at the top of the heap of the younger generation of conductors currently working today.

“Messiah” remains the most beloved of all sacred choral works for many well-deserved reasons. Its stylistic consistency is the result of Handel having written it in one fell swoop within the space of a single month. He brought to its composition decades worth of operatic and instrumental writing. The libretto Charles Jennens gave him is a masterpiece in and of itself, covering the span of Old Testament prophesies and New Testament fulfillment with memorable concision and the peerless poetry of the King James translation of the Bible into English. Handel’s balance between recitative, aria and chorus never falters in its primary challenge to tell the story of the Christ, and the quality of the individual parts of “Messiah” is only surpassed by the power of the score as an entirety.

It was this appreciation of the work as a whole that distinguished Nezet-Seguin’s interpretation Saturday evening from those that are merely great into one that was sublime. While granting each movement its due as a priceless musical gem, the young maestro welded all these individual jewels into an artistic crown of unmatched beauty and power.

Of course, he had more than a little help from the musicians who joined him on the stage of Verizon Hall. Soprano Carolyn Sampson, countertenor Christophe Dumaux, tenor Jonas Hacker and bass-baritone Philippe Sly sang with operatic scope to deliver intimate revelations. The Westminster Symphonic Choir projected the dramatic span of Handel’s splendid choral writing. Best of all, Nezet-Seguin drew playing from the Orchestra that rivaled the bracing clarity of any period instruments ensemble without sacrificing the refined luster of their legendary “Philadelphia Sound.”

The Philadelphia Orchestra continues celebrating the Christmas holiday with performances of Gian Carlo Menotti’s “Amahl and the Night Visitors” Thursday, Dec. 13, at 7:30 p.m. and Saturday, Dec. 15, at 8 p.m. Visit philorch.org for more information.