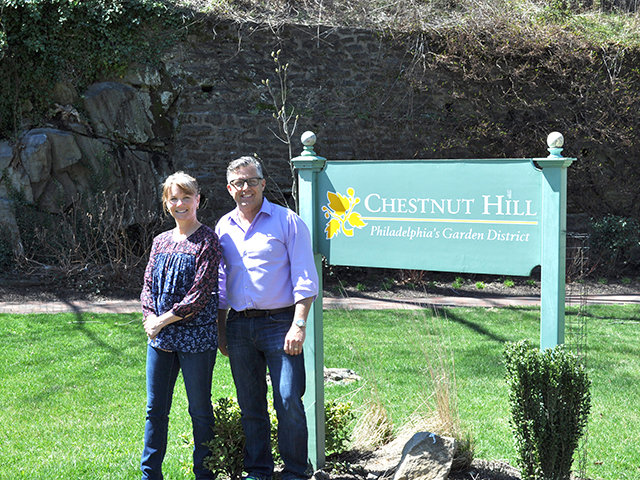 “Let's face it,” said Kevin Burke, president and owner of Burke Brothers Landscape, “there are only two ways to enter Chestnut Hill – at the top of the hill and at the bottom of the hill. Cliff Park – at the bottom – is the key entryway from the south and was way past due for a serious facelift. It has become a mission, my contribution and a pleasure to work with Chestnut Hill Garden District Fund (CHGDF) to help beautify my own backyard.”

In spring 2014, Burke attended the celebratory cocktail party honoring Dottie Sheffield for her work in founding CHGDF. Held at the home of Amy and Putnam Coes, a home landscaped by Burke’s company, he was impressed with the CHGDF's mission of beautifying Chestnut Hill. He approached Emily Daeschler, president of CHGDF, and volunteered to assist with beautifying Cliff Park.

“It was so exciting to receive Kevin's willingness and enthusiasm to help,” Daeschler said. “It is rare that people step forward, unprovoked, to contribute. But then, again, Kevin is a rare guy. He sees a need and steps up to assist. All of us are lucky to have him on board for this project.”

It was only about seven years ago that PennDOT, at the request of the Chestnut Hill Business District, changed the look and traffic pattern at the corner of Germantown Avenue and Cresheim Valley Road. Evidently, cars heading east could take the curve onto Cresheim with abandon because the road was wide, extending well into what is now grass and sidewalk and part of Cliff Park.

PennDOT simply used soil to cover the road and then added an outside sidewalk and curb to create what is now the outer edge of the park. They also seeded a collar of tress to anchor the area. It was a fine improvement, but the area was an overgrown mess and needed major attention to deserve the title of “park.”

“That is when CHGDF’s ‘We Flower the Avenue’ organization stepped in to own and oversee a new and improved Cliff Park,” Daeschler said. “We were already taking care of Meditation Park and the War Memorial. It seemed a natural continuance of our mission.”

In 2010 CHGDF adopted the park and began in earnest to clean and weed providing many hours of sweat equity. Through the years, they planted three witch hazels, one Cornice Mas and a yellow blooming magnolia along with hundreds of day lilies and daffodils. They added six oak leaf hydrangeas, 12 yucca plants and a climbing hydrangea for the rock cliff. They placed two benches in the park and crowned the space by planting a beautiful sign to designate the space which was mowed down the same day by a motorist!

This was great improvement – but there was much more to do.

They committed to dramatic improvement for Cliff Park with their generous gift to CHGDF. Burke mobilized crews who have spent hundreds of hours tirelessly weeding and clearing unwanted fallen trees and undergrowth. They attractively landscaped the area and re-seeded the grass. (The grass is now maintained by Pennsylvania Turf Company using their six-step process for continual “weed and feed.”) Burke Brothers donated more than $15,000 of plant material and labor to date, including two Hawthorn trees and a blue point juniper, a dozen shrubs – red, yellow and purple – and hundreds of perennials and ferns.

Daeschler and Burke said the next step for the park is that it should be lit. It will be the next step in Burke’s continuing work on the park.

“I am proud to enrich and give-back to Chestnut Hill,” Burke said. “It is a community that has helped my business thrive and grow, and it is right in my own backyard.”.

Barbara Olson is a board member of CHGDF