Frank Garber, one of the last of a dying breed, did not just sell stuff. He provided such intensive personal service that being waited on by him was like attending a photo workshop. (Photo by Pete … 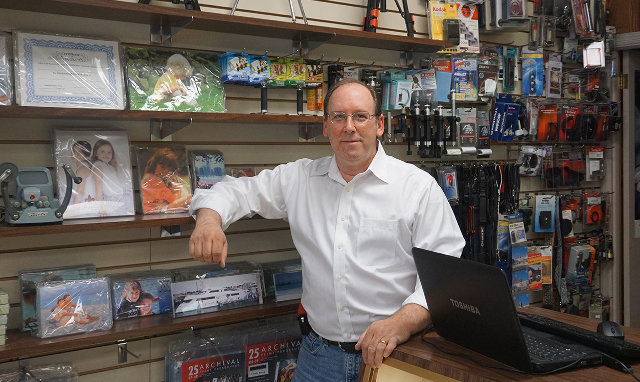 Frank Garber, one of the last of a dying breed, did not just sell stuff. He provided such intensive personal service that being waited on by him was like attending a photo workshop. (Photo by Pete Mazzaccaro)

When I was a kid, my mom would take me with her to the A & P supermarket at 13th and Chew in Olney every week to do her food shopping. As a newspaper delivery boy for the Philadelphia Bulletin, I would look through the thick food section with lots of full-page supermarket ads on Tuesdays and look for bargain prices.

I remember telling my mom that prices of several things she wanted were cheaper at another supermarket in the neighborhood. She said, “No way am I going anywhere else but the A & P. I know all the cashiers, and they know me. We talk to each other about our kids and other things. They are my friends. If I have to pay a little bit more for the food, so be it.”

I thought about this when I walked into the Chestnut Hill Camera Shop at 8614 Germantown Ave. on the afternoon of Monday, Aug. 15, the last day of the 64-year-old family business. Owner Frank Garber, who started working there in 1974 at age 16, was in a nasty mood, and I do not blame him. Dozens of boxes of photo equipment sat there on the floor. “There is at least $8,000 worth of equipment that I tried to sell. I was offered $800 for it. I said no,” said Frank, who has a business degree from Temple U. but has never worked anywhere but the camera shop.

Twenty-five years ago my wife and I visited the George Eastman Photo Museum in Rochester, New York (Eastman was the founder of the Kodak Camera firm, the first of its kind). They had antique cameras going back to the early 1800s, when the camera was invented. But I would not be surprised if Frank Garber’s collection of antique cameras was not just as extensive as the Eastman Museum’s.

The Smart Phone and the Internet basically killed Frank’s business, as they are killing so many others. “If people don’t take pictures with their cell phones,” he said, “they would buy cameras online and then come in here and ask me how to use them.”

Frank’s store was like the Kilian’s of the camera world. Kilian’s has about four million items in the store stacked up floor to ceiling. If I studied them all for three years, there is no way I would remember where everything is or even if the store carries a certain item. But there are people in Kilian’s who, if you can track them down (that can be difficult), will tell you without hesitation where a two-inch nail made out of aluminum from Uruguay is located. Try to find the same kind of service in a national chain store. Good luck. You’re lucky if the same employee is there from week to week.

The same thing with cameras. I bought a camera several years at Boscov’s because of a sale price. What a mistake. I guess you really do get what you pay for. When I went back to Boscov’s with a problem, it took me half of the afternoon just to find someone to wait on me. And the young man who waited on me could not answer my questions and went to get someone else, who must have been in Panama because I’m not even sure if they ever came back.

So I went to Frank at the Chestnut Hill Camera Shop. I may have paid $10 more, but Frank patiently explained so much about the camera, I was afraid he was going to give me a final exam. I am no technological genius, to put it politely, but every time I had a problem (a few times), Frank patiently explained the solution (after waiting for a while because he gave the same comprehensive service to every customer) and refused to charge me, even when I begged to pay. Once last year I left some money on the counter because it was embarrassing for me to get such professional help and not be charged anything.

Frank is like the family doctor who used to come to your house because you were too sick to go to his office (yes, youngsters, family doctors did actually make house calls) and then charged you whatever you were willing and able to pay. Can you get anything like that kind of service from an HMO?

I know I am a Luddite because I lament the days when you could call Bell Telephone and immediately talk to an operator in Philadelphia, not India, who was actually polite and took the time to deal with your questions. Tragically, that kind of personal attention is almost a relic of the past, a dinosaur that can only be found in a museum. The mom-and-pop stores will soon be all gone, put out of business by the national chains who do not know you and do not really want to know you.

And there will be no one more missed than the Chestnut Hill Camera Shop.