Brenda was honored for her outstanding community service by the Chestnut Hill Community Association (CHCA) at an awards dinner Thursday, April 23, at Norwood-Fontbonne Academy. Brenda (left) is seen … 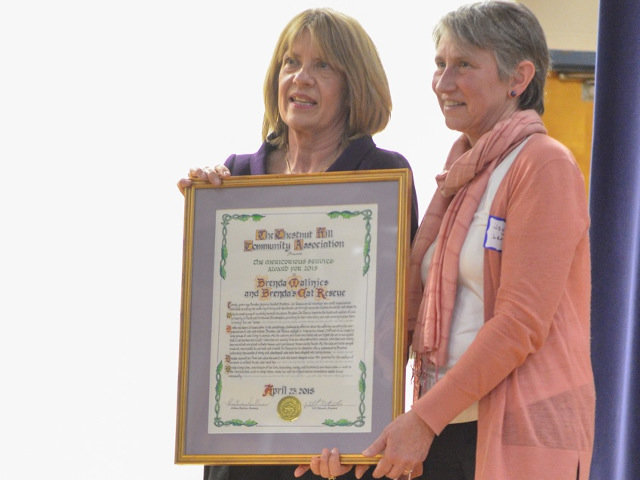 Ed. Note: Brenda Malinics is one of four area residents who were given awards for community service by the Chestnut Hill Community Association at a dinner on Thursday, April 23. Brenda, who now has a team of volunteers, has rescued and found homes for hundreds of abandoned and abused cats and kittens over many years.

For years Brenda’s Cat Rescue, a small and local rescue organization, has found adoptions of homeless cats and kittens through flyers and photos in the Chestnut Hill Local. Over the past few years, we expanded and began showcasing cats at different events and stores, one of which was Bone Appetite a Bowman Property. However, the cats were often stressed by the visiting dogs and the car rides to the store, so the cats did not always present themselves as best as they could.

Our core group of only four volunteers commented about how great it would be to have a site on the Avenue to showcase relaxed cats in a safe setting. We began conversations with Richard Snowden, of Bowman Properties, and after securing liability insurance and non-profit status, we had a lease at 8514 Germantown Ave. for the month of February. Our theme was to be love (capitalizing on Valentine’s Day) and the ownership of pets.

Having the opportunity for a highly visible storefront was a dream come true.   However, we had three weeks to organize and pull off a Pop-Up Adoption Site. I wanted to maximize this opportunity and began to think about how we could not only adopt cats and kittens but also educate adults and children as much as possible about animals. However, we had little time, limited resources and only four volunteers, but I was in adrenaline overload, and my gut instinct said to “go for broke.” This was an opportunity of a lifetime. So, I made lists and more lists. I wasn’t sure what to do first.

In one of my many former lives, I had a career in a marketing and public relations and am lucky to have a talented sister, Debra, who owns a communications/graphic design company. (Debra did the logo & tagline for BCR.) So I called her, and we brainstormed on what to call the Pop-Up Adoption site.  We came up with Cat Camp because it was a place where cats and people would gather for fun and educational experiences

We then needed to come up with a marketing campaign. Debra told me about an advertising campaign done by a shelter in Atlanta that put classified ads in magazines advertising cats and dogs as if they were people seeking human companions. People who responded to the ads were actually calling the shelter looking for the person from the descriptions (“curvaceous female who loved to snuggle in bed”) that they saw in the ads. 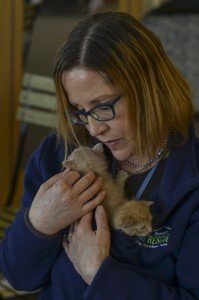 That campaign was so successful that shelter adoptions numbers went off the charts. So we decided to replicate that effort in Chestnut Hill. A bit risky, but we decided to take it, nonetheless. So, we set about writing copy for the classifieds that would go into the windows to get attention and have people asking, “What type of business is coming into this storefront?”

We needed to set hours. We ambitiously decided to be open Friday night, Saturday and Sunday. This was an exhausting schedule, which meant coming directly from our day jobs with no time for any routine weekend chores. However, we figured that February was a short month, and we could do it. We pushed onward.

I’ve organized events and set about making an agenda and creating programs, so I knew we needed a kick-off reception for supporters and media. We needed a photographer and a caterer. My lists grew larger; I kept my handy notebook close by; I made check lists in my sleep — when I could sleep. I began losing weight without trying. I kept checking the weather daily and began living in fear of weather forecasts. I kept anticipating the major blizzard of 2015 would take place in February.

I wrote a press release, created an invitation, a guest list, a media list; I wondered if I was too deep over my head. We needed cages, tables, dishes, water bowls, litter pans, cat beds and fabric, toys, educational handouts, clip boards, pens, first-aid kits…my head was starting to spin.

Where does one get lots of six-foot tables? Having just done the Blessing of the Animals at St. Paul’s Episcopal Church, I asked, and they graciously loaned us tables. Now I needed a truck to transport. Is anything easy? I was beginning to think not. I gave up sleep and discovered meal bars, which became my staple food.

I tried to think creatively, especially since we had no budget. I called Antonelli School of Photography and asked for student photographers. They were happy to send students. Gigi Glendinning of 22 Reasons, a local non-profit that educates children about animal abuse, and Janice Strawder, of Allens Lane Art Center, agreed to do the children’s programs. All my adults programs were done free of charge by contacts and friends.

My friend, Carole Anne Hensley of Furry Buddies In-Home Service, offered to sponsor the reception. I no longer had to worry about buying wine, flowers, or food. Carole Anne and other friends loaned cages and bowls and tables and helped me remember things that I didn’t even know I would need. All borrowed items needed to be identified and assembled. I kept thanking the universe for good friends and awesome volunteers.